These Colors Don’t Run, They Just Need To Be Mowed

When it comes to showing their true colors, these Americans don’t hold back.

It’s easy to feel patriotic when you see the stars and stripes flying high, but some contend that it just simply isn’t enough. Here are a few patriots who went the extra mile to show off the red, white, and blue:

After Sept. 11, 2001, a landscaper trimmed a 300-by-600-foot flag into Bob Burr’s front yard, and the idea took off from there. Burr contacted Ken Cardwell of K&B Striping in Bowling Green. Cardwell painted the stripes on all of Western Kentucky University’s parking lots, so a 548-long flag was a viable challenge. 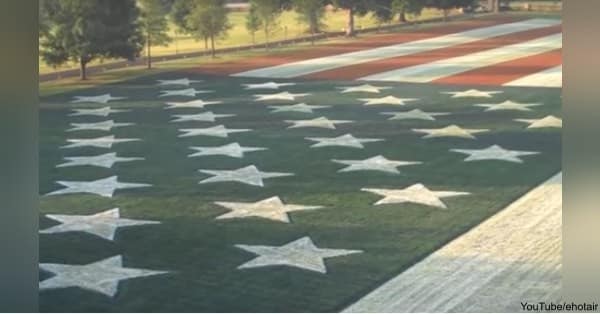 “The best part is whenever I spray the last star,” Cardwell told the Bowling Green Daily News. “I like the challenge and the excitement of doing it.”

Burr, who moved to Bowling Green from California in 1990, said he is not sure if he will continue the tradition, but that there will always be a flag on his property, even if he has to go out and find the “biggest flag money can buy” to fly from a pole.

“World War II veterans will come out and ask if they can walk on the flag. We have a great visit and shed a tear or two,” Burr said. “Spiritually, it’s been one of the most rewarding things we’ve ever done.”

Before Lance Corporal Chad Davis was scheduled to return home from deployment, his mother, Lori Davis, contracted John Morris to cover her lawn in the stars and stripes. 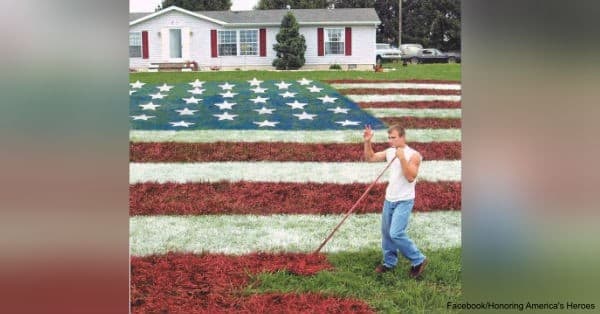 Lori Davis, contracted John Morris to paint her lawn to honor the return of her son, Lance Corporal Chad Davis.

The Image took on a double life as it circulated the internet. While many praised Morris’ efforts to honor the soldier’s homecoming, another version of the photo derided a fictional homeowners association for banning flags. The caption indicated that the painted lawn was Morris’ way of fighting back. We all know the truth, now.

Each year since September 11, 2001, Ken Ober and his two sons, Ken II and Chris, have painted an American flag on their front lawn.

Ober said that, for many people, the events of 9/11 have faded away.

“As Americans, we should never forget,” he said.

When the residents of San Jose, Calif. were forced to cut back on water usage in 2015, Claudia Decker and her husband came up with a clever idea to add some color to their otherwise brown lawn.

“My husband went along and sprayed the edge, and that was it. We measured 21-inches wide, and 13 stripes, 50 stars,” Decker told CBS.

After 15 cans of paint and a day’s work, the Deckers, and their neighbors, found the lawn cause for a Flag Day celebration.

“They have asked how to do it,” Decker said. “They said, ‘Are you going to do it for our lawn, can you maybe come over and show us?’”

While these Americans show their support for the United States from their front lawns, you can also show our military that we have not forgotten about their selfless service and sacrifice. With GreaterGood.org, you can offer comfort to our troops stationed overseas in the form of care packages. Follow this link to find out more.