U.S. military veterans are role models for us all, but two Marines just showed the country what it really means to be an inspiration. Sgt. Christopher Lawrence and Lance Cpl. Matias Ferreira served in Iraq and Afghanistan, respectively, where both Marines suffered injuries from IED explosions. Lawrence lost his right leg. Ferreira lost both of his legs.

Now, the two veterans are trading in their dress blues to walk the thin blue line.

The Marines are two of the latest police academy graduates to become full-time police officers, despite having prosthetic legs. Both are driven by a sense of purpose and duty to serve and protect — first that was in the Marine Corps serving our country, and now it is in law enforcement serving their local neighborhoods back here at home.

Each Marine has an amazing story to tell, and both are outstanding examples of the strength, bravery, and valor found in veterans of the United States Armed Forces. 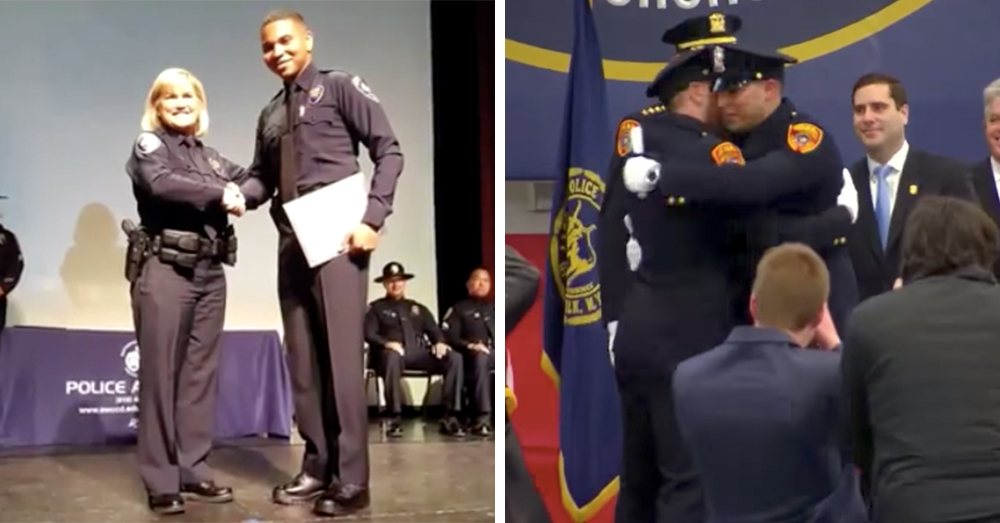 In 2007, USMC Sgt. Christopher Lawrence was severely injured while serving in Iraq. An IED explosion wounded his arm and tore through his right leg. He had to have the lower portion of that leg removed and replaced with a prosthetic. Something like that wasn’t going to slow him down, however, as he entered civilian life with the same goal he had before his injury — to become a police officer.

Lawrence said he always wanted to join law enforcement after his time in the military, and having his right leg amputated didn’t change that at all. However, he was initially turned down by the Orange County Police Department due to his “physical limitations.” He just kept pressing on and finally got accepted. Without any special accommodations, Lawrence graduated from the academy and is now a police officer with the Chula Vista Police Department in California.

“I wouldn’t have ever guessed nine, 10 years ago when I got injured that I would be achieving this,” Lawrence told a local news station. “I want to have the impact on the community that those officers had on me when I was younger and I want to return every favor I’ve gotten and make sure that I can do everything I can to help the citizens of Chula Vista.”

Another Marine Corps veteran just made history in New York, becoming the first fully active, double-amputee police officer in the country. Lance Cpl. Matias Ferreira lost both of his legs to an IED explosion while serving in Afghanistan in 2011. He received a Purple Heart for his injury, and after leaving the Marine Corps, Ferreira started working, motorcycle riding, and competing on the Wounded Warrior Amputee Softball Team. In 2015, Ferreira made headlines when he rescued a baby from a car crash on the night of his own wedding rehearsal.

Ferreira recently graduated from the Suffolk County Police Academy and is now a police officer with the same department. “I don’t think the prosthetics hinder me in any way,” said Ferreira, who uses humor with his fellow police officers. “A lot of guys are like, ‘What happens if one of your legs break?'” he said. “I’m sorry to say, but if I break my leg, I go in the trunk, I put on a new one. If you break your leg, you’re out for a couple months, my friend.”

“This is someone who served our nation, paid a significant sacrifice, and is now able to overcome adversity in a tremendous way,” said Police Commissioner, Timothy Sini. “He’s done a terrific job as a recruit in the academy, both physically, academically, and in his leadership to the other recruits, and he’s going to make a fine officer.”

Watch Ferreira talk about his journey in the video below!