This is a uniquely American story. It takes place against the monumental backdrop of slavery and the Civil War. It is a story about the ravages of the “peculiar institution,” of conflicted attitudes, and profound determination and courage. William H. Carney was at the center of it all.

Carney was born a slave on leap year day, February 29, 1840, in Norfolk, Virginia. His father later escaped his bonds and fled to New Bedford, Massachusetts, where he would find work and save his money to purchase freedom for the rest of his family. Young William would not arrive in New Bedford until he was about 15 in the mid 1850s. He learned to read and write and initially wanted to become a minister.

When the Emancipation Proclamation was signed into law by Abraham Lincoln in 1863, the governor of Massachusetts formed and commissioned an all Black unit designated the 54th Massachusetts Infantry Regiment. He placed white officers in charge of the unit under the command of one Col. Robert Shaw. It had been believed that Blacks would not make good soldiers. Under Col. Shaw, the 54th Massachusetts Infantry Regiment would be trained and readied for battle, but they would struggle against the prejudices of the times to be given an actual opportunity to fight.

The men of the 54th Massachusetts would leave Boston in the summer of 1863. They had their first taste of battle at James Island, South Carolina on July 16, 1863. It would be a short two days later that they would be given the unenviable job of leading a charge against the strong Confederate position at Fort Wagner, SC. Only a week earlier, 300 Union troops had died before the ramparts of that fort in the first attempt to take it. The Confederates suffered only a dozen or so casualties on that attempt.

Col. Shaw’s last words to his men were, “Forward Fifty-fourth.” He led them at the front and was soon struck several times in the chest by rifle fire and fell mortally wounded.

The men of the 54th continued forward under a fierce barrage of artillery, mortar and rifle fire. At one point the flag bearer carrying the Stars and Stripes was shot and fell, still trying to hold the colors up.

This is when William Carney took his place in history.

Carney immediately dropped his rifle and grasped the flag and ran to the front of the charge to lead the way. He was hit twice by Confederate bullets, but continued on toward the parapets. He and a few of the 54th soldiers made to the top of the battered walls under fierce rifle fire. Then when he looked around he suddenly realized he was the lone man standing. The others had been struck down by the powerful defense of the Confederates.

He looked to his right and saw Union forces advancing on another part of the walls. He looked to his left where he saw a large number of forces advancing toward him. He at first hoped that these were also Union soldiers, but they quickly opened up with a fusilade of bullets aimed at him. He was struck again but did not go down. He wrapped the flag around its pole and headed toward the union forces on his right.

Carney was met by a union soldier from the 100th New York Regiment, who asked if he was wounded. Carney answered in the affirmative and the soldier from the 100th began to lead him to the rear. The New Yorker asked Carney if he could relieve him of the colors, but Carney told him he would not let go of them to anyone but the 54th Massachusetts. Suddenly, a bullet grazed the side of Carney’s head, but he held on, still.

Carney was finally given over to the medical personnel and reunited with his fellow soldiers from the 54th. When he came among them he handed over the flag saying, “Boys, the old flag never touched the ground.”

Because of his actions that day, he was promoted to sergeant, but his wounds were severe enough that he would never be able to fight with his 54th Massachusetts brothers again. He was discharged from the Army on June 30, 1864. The gallant efforts of the 54th Massachusetts Infantry Regiment on that day proved the valor and skill of the Black soldier and inspired thousands of other former slaves and free Blacks to join the Union Army. 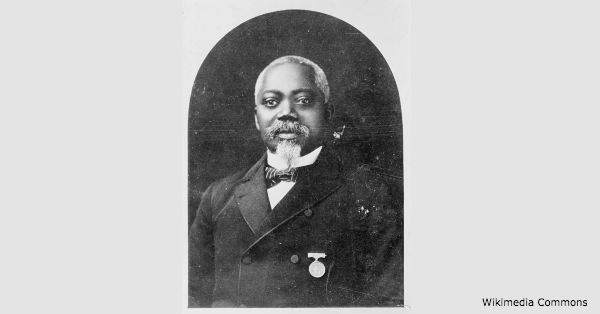 After his discharge, Carney would go home to New Bedford and work for the next 32 years as a letter carrier for the United States Postal Service. He would marry Susannah Williams on Oct. 11, 1865 and they would have one child who would become an accomplished music teacher in New Bedford.

It would take 37 years before William Carney would receive the Medal of Honor, which was not unusual for African-American soldiers of the Civil War. He would receive it on May 23, 1900. The citation read: “When the color sergeant was shot down, this soldier grasped the flag, led the way to the parapet, and planted the colors there on. When the troops fell back, he brought off the flag, under a fierce fire in which he was severely wounded.”

After retiring from the Postal Service, William H. Carney served as a messenger in the Massachusetts State House. On December 9, 1908, he died from injuries he incurred in an elevator accident at the State House.

The Veterans Site wishes to honor William H. Carney for his bravery on the battlefield, for his dedication to freedom and family, and for his long years of service with the Postal Service. This soldier, this man, was a model for all of us.

Respect and honor to you, good soldier.