Comments made recently by a certain candidate for the Presidency of the United States, have given me cause to reflect on what a “war hero” is. Frankly, it is not hard to determine the qualities of such a person, and truth be told, there are many kinds of heroism that war demands of those who are called to serve in times of war. I offer here just a couple of small reflections to get at defining what a war hero is.

War, by its very nature requires heroism on the part of all who participate in it at all levels.

The constant reality of war is the immediate and violent threat of death. Not everyone is up to this. Those who choose to serve do so knowing at some level that they may be required to face the enemy on the field of battle and to confront the possibility of injury or death. War, like nothing else in human experience, brings the threat of death out of the shadows and makes its presence known in the sound and the fury, the wild wizardry of combat.

Death screams at you in the sound of incoming artillery. It whispers in your ears in the buzz of passing bullets in a firefight. Its smell is in your nostrils and you often get the physical sense that you can feel it close to you, breathing down your neck.

All of those who have experienced this know what I am talking about here. A war hero, then, is one who stands in the face of such horror and does not retreat. Why? Because warriors have a bond between them. They face their fears and fight on for one another, the guys on their right, and the guys on their left. Yes, they are engaged in things bigger than that, things like the defense of freedom, the protection of the anonymous innocents, but when the hell of war rushes upon them in the fearsome immediacy of battle, they become heroes for one another alone. 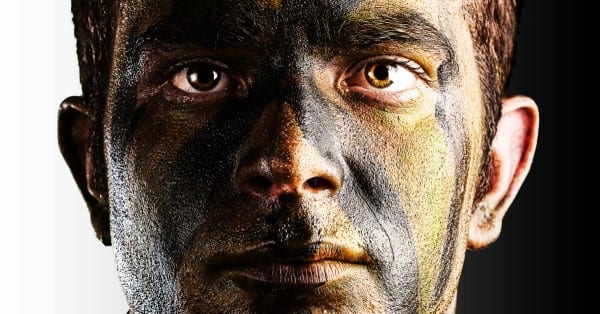 This is not done without courage, and I mean heroic courage. I know this because I have been there. I have walked with and been in battle with such heroes. I have laughed with them when we were in the rear, in those few days when we could stand down from the duties of war. And I have seen the fear and the determination in their eyes when we were caught up in terrors of a firefight.

They gave me courage.

I can say, without embarrassment, that I came to love them more than mere words can tell. Just to strap on a full pack with a week’s worth of food, water and a sufficient amount of ammunition, and to cradle your piece in the crook of your arm and be helicoptered out into enemy territory for a seven day reconnaissance patrol where you will have to move as quietly and as unobtrusively as humanly possible through the enemy’s territory, takes heroic courage. But there is a kind of war hero whose courage I cannot even imagine.

It is a courage that I fear I would not have had.

It is a heroism that demands every ounce of one’s strength, physically, mentally and spiritually.

When one is a POW there is no time for rest from the threat of immediate suffering and possible death, and everything is completely out of your control. You must face the challenges of constant fear and despair. You must somehow find the physical and the inner strength to get through the intense pains of torture carried out by uncaring, even sadistic guards.

If you have read the book, “Unbroken” about Louis Zamperini’s experiences as a POW under the Japanese in WWII, you may have at least a picture in your mind.

A POW cannot know if he or she will ever see the light of freedom again. Most of us would be utterly overwhelmed by the horrors that the POWs in any war have had to face. Only true heroism could get one through the physical and psychological horrors of torture, the constant pressures of fear and anxiety, the desperation of whether one will ever see the faces of, or feel the comforting embraces of, one’s loved ones again.

This kind of war hero has had to face the knowledge daily that he might dragged from his dirty, narrow prison cell and be tortured, or arbitrarily and summarily killed, then be thrown unceremoniously into an unmarked hole in the ground thousands of miles away from home.

As POWs, they had to appeal to that inner strength, that heroic courage every waking moment of every day in order to endure and to hold onto the hope that one day they might be liberated. They had to hold on against the threat and the realities of the physical pain of torture and the more inexpressible psychological pains of loneliness, fear, and the threat of despair.

Great shot of the EC-130H Compass Call aircraft deployed from Davis-Monthan AFB in #Tucson, prepping for a mission pic.twitter.com/tDOyvKiabC

I spent thirteen months in Vietnam, from January 1968 to February 1969.

During that time John McCain and his fellow POWs were suffering unimaginable horrors out of sight and out of the minds of most Americans up in Hanoi in the infamous prison that they named, with typical American ironic wit, the “Hanoi Hilton.” When I went out on patrols with my Marines on our six to eight man patrols, the prayer that was uppermost in my mind was that we would not be captured, yes, even more than my prayers that we would not be wounded or killed in some firefight. I instinctively feared that I would not have the physical courage, or the psychological strength to survive what the POWs during that war experienced.

Is a guy who has been captured and survived the realities of being a POW, a war hero?

Thoroughly, unquestioningly, absolutely, YES! We here at The Veterans Site wish to honor all those who have endured and survived the hell of being POWs. The courage you modeled, the enduring heroism of you suffering at the hands of an unforgiving enemy in those years, humbles us all. Your endurance, your faith in yourselves and your fellow POWs, and your commitment to honor and duty showed us yet another of the the true faces of heroism in a time of war. We can offer you only what we have, our humble and sincere thanks.

You did your duty with great dignity and honor.

You will always be heroes to us.