David Vobora is a former pro-football player. He was the 252nd pick in the 2008 draft and played until he suffered a devastating, career-ending traumatic shoulder injury while playing with the Seattle Seahawks.

During the healing process he struggled with becoming addicted to the pain medications. But even more difficult for him, after spending most of his youth and his college years playing football and fulfilling his dream to play in the NFL, was finding out what to do next, or who he even was without football.

He was forced to ask himself the then troubling question, “Who is David Vobora without football?”

All of us fall into that mental error at one time or another, the error of defining ourselves, and our self-worth by what we do. To define ourselves by what we do, alone, is a very narrow, and incomplete definition of something so complex and valuable as a human being. It is too shallow a definition.

For veterans who have suffered devastating, life-changing injuries in service to the country in times of war, this question takes on an even greater importance. An NFL player and a modern war fighter have one thing in common, their physical strength and abilities. A strong body and well-honed physical skills are real and valued necessities for both. What happens to a combat veteran whose injuries take those skills and abilities away from them forever? Many of our military veterans have suffered such devastating injuries as the loss of a limb. Indeed in a handful of cases warriors have survived the loss of all four limbs.

This is where a connection in this story comes about. It is a connection between a former NFL player and some of our wounded veterans.

Vobora found a meaning to his life after leaving the NFL by starting his gym, Performance Vault, in Texas. He opened that gym to train and retrain elite athletes in their efforts to recover after injuries, and even to play again in their various sports.

Though he can no longer play in the NFL, he is making it possible to others to play again, or to return to productive lives in other areas. But he ran into another challenge too. It came in the form of a very special wounded veteran who would change Vobora’s life again. 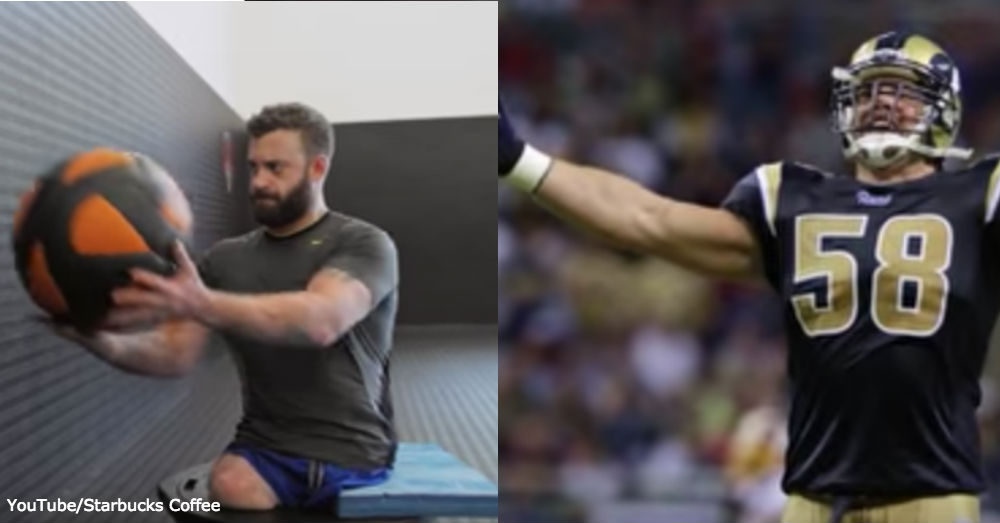 With the help of former NFL player David Vobora, right, Staff Sgt. Travis Mills, left, was able to get back on top of his life.

Staff Sft. Travis Mills is one of five living veterans who are quadruple amputees. When Vobora first met Mills, his first words to him were, “When was the last time you worked out?”

But Mills responded with aplomb, wisecracking that apparently Vobora hadn’t noticed that he had no arms or legs. With that introduction, a friendship and a new road opened up for both of them.

Vobora could not turn away from Staff Sgt. Mills. He had to start another gym program for these severely wounded veterans. It is a program that experiments with all different kinds of exercises unique to each of the veterans injuries, needs, and abilities. He fills in the gaps for these veterans after they have completed their rehabilitation programs and their insurance has petered out for them.

For Mills and others, like Brian Aft who you see at the beginning of this video, Vobora’s program has been a major factor in helping them gain back a sense of confidence and self-worth. They, like Vobora, discover that they are more than their wounds, more than their obvious limitations.

David Vobora found a way to bring a deeper meaning into his life, a meaning that transcended his understanding of himself as a pro football player. Now he also uses his talents to serve these severely wounded veterans in his own unique and positive way through his Adaptive Training Foundation. He has helped these wounded warriors to go beyond their real and their perceived limitations, to feeling good about themselves again. These wounded veterans have found new meaning, and a renewed sense of purpose.

The Veterans Site would like to thank David Vobora for his unstinting, generous service to our wounded veterans. We also wish to honor and thank those wounded warriors he serves. This program and these individuals are proof that we are more than who we think we are, more than what we can or cannot do. In their dedication to be more that the sum total of their physical limitations, we see both real courage and powerful role models for how we can overcome the difficulties in our own lives. You are the best.