It was dangerous enough for the patrols for the 3rd Reconnaissance Bn, 3rd Marine Division up in Quang Tri Province, the northernmost province of South Vietnam, but being ambushed by an actual man-eating tiger? That was not in the training manuals.

But such an event did happen in December of 1968. This story was first reported by Sgt. Bob Morris in Northern Marine Magazine.

After the Tet Offensive, in the early months of 1968, the 6-8 men 3rd Recon patrols continued their efforts to spot the ongoing NVA troop movements. Their work caused havoc on the enemy throughout the, summer and fall months of that year. They were good at what they did. Good enough that the NVA and what was left of the VC started offering a special bounty for killing or capturing any 3rd Recon Marine.

In December of that year a six man Recon team from Charlie Co. was on an observation mission near a fire base in the extreme northwestern corner of South Vietnam. Fire Support Base Alpine was located in the mountains about 6 miles east of the Laotian border. It was a particularly dangerous place. Their mission had been completed, but because of bad weather conditions, their helicopter extract was canceled, so they settled down in a harbor site for the night. They followed their usual routine, posting a two-man radio watch, while the others tried to get some sleep. 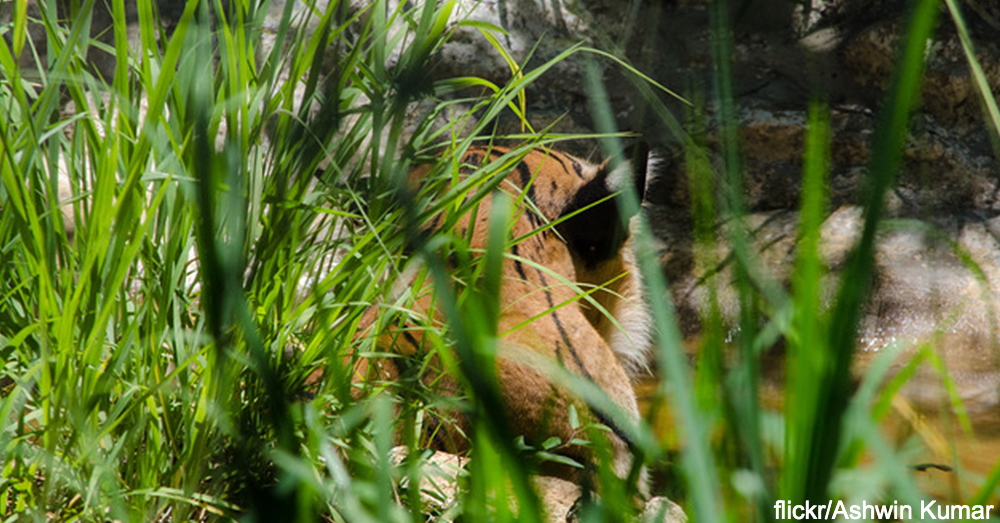 Just before dawn, the completely unexpected happened. With a sudden and lighting fast rush, a tiger came out of the bush and took one of the team. PFC Thomas E. Shainline heard a scream, then, somebody shouting, “It’s a tiger! It’s a tiger.” PFC Roy Regan had been sleeping beside the man who was taken. He said, “I jumped up and saw the tiger with his mouth around my partner. All I could think about was to get the tiger away from him. I jumped at the tiger and the cat jerked its head and jumped onto a bomb crater 10 meters away.”

At that point, the remaining team members ran to the lip of the crater and all five of them opened fire on the tiger. No one knows which one of them got the kill shot on the animal, but when they hit it, it released the Marine who staggered up out of the crater saying, “What happened?”

Sadly, another Marine had actually been killed by a tiger near Fire Support Base Alpine some six weeks earlier. A Vietnamese tiger hunter, Phan Van Sang, who was present to see this tiger at the 3rd Recon Headquarters, had participated in a hunt for the tiger that was involved in that earlier incident as well. He believed that the tiger that the Marines had brought back with them might have been the same tiger. He had killed five tigers over the course of his tiger hunting career, but said he had never seen one so large as the cat that these Charlie Co. Marines brought back with them. It measured out at 9 feet in length from head to tail.

I know this story personally. I had been a Corpsman with Bravo Co. 3rd Recon for most of my 13 month tour, but I had been recently transferred out of the field to the 3rd Medical Battalion hospital in Quang Tri. I was there when the Marine was medevac’d in to us. I actually got to see the tiger laid out on the helipad. Myself and others, actually took care of the Marine who was attacked by the tiger while he was temporarily in our surgical ward after his wounds were cleaned and surgically repaired. The tiger had taken him by the head and he had deep wounds in his neck and scalp from the tiger’s huge teeth. Suffice it to say, the Marine survived his encounter with that man-eating tiger. And he and the rest of the battalion had a fantastically unusual war story to tell.

The old cliche, “war is hell,” took on a whole different meaning for the six Marines of that Charlie Co. 3rd Recon patrol in 1968. The environment and experiences of war are surreal enough, but to be almost killed by a real, man-eating tiger, makes the nightmare even stranger.

For Vietnam veterans, the “Nam” was not “the world.” That term was used to describe whatever we thought of as “back home” where things were “normal” and familiar. There was nothing either normal or familiar about where we found ourselves back then during that war. The Marines from Charlie Co. who were on that patrol had a whole new sense of the surreal after their surprising encounter with nature’s top predator in the jungles and mountains of that far away place.

The Veterans Site thanks all who served in Vietnam. Welcome Home!