There’s a national trend in the court system when it comes to handling veterans, but unlike many stories that end with veterans serving time, this one has hope.

Veterans in Colorado Illinois, Maine, Florida, Arizona, Texas, Nebraska, and North Carolina have the option to enter a Veterans Treatment Court if they wind up in the system and are deemed eligible. Other states are expected to supplement similar court systems soon. Judges in these courts focus heavily on the needs, treatment, and recovery of those listed on an all-veteran docket. Many have been lauded for their compassion, and in one North Carolina veterans court, District Court Judge Lou Olivera, after hearing the history of a veteran suffering from PTSD, brought to the court for a driving under the influence charge, sentenced the man to a night in jail and joined him.

“This ‘veterans court’ offers people returning from military service who have found themselves in trouble a more humane court experience focused on rehabilitation,” wrote Jessica Jackson Sloan, a human rights attorney, co-founder of #cut50, an organization which aims to reduce the number of people behind bars, in a piece for CNN. “Veterans treatment courts recognize that traditional, punitive sentencing doesn’t address these root problems. Instead, in these courts, judges work with a team of professionals to ensure veterans are clinically assessed, connected with the evidence-based treatment and services they’ve earned through the VA, and paired with a volunteer veteran mentor who can guide them through the rigorous demands of the program.” 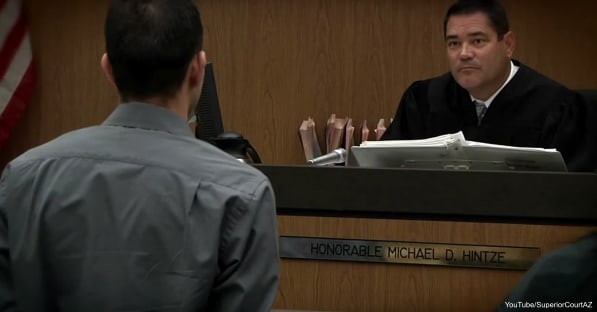 The National Center for State Courts lists the first veteran’s court opened in Buffalo, N.Y. in 2008 under Judge Robert Russell. Russell saw how many veterans were entering the system in drug and mental health courts, but also the spark of military camaraderie when veterans on his staff worked with veterans in the system. After petitioning the U.S. Department of Veterans Affairs Medical Center and finding volunteer veterans willing to work the program, the veterans treatment court was born.

Before its Veterans Treatment Court began last year, Nebraska launched a Veterans’ Pretrial Diversion Program in 2012. Similar to the Veterans Treatment Court, the Pretrial Diversion Program aims at maintaining sentencing guidelines for the nonviolent veteran offenders that come through its docket, while working with offenders and connecting them with VA services and treatment programs. It is part of the VA’s Veteran Justice Outreach Initiative, which is intended to avoid the unnecessary criminalization of mental illness and extended incarceration among Veterans. The goal is to ensure that eligible vets in the criminal system have timely access to VA mental health and substance use services when needed.

For veterans who have been through the court system, returning to a stable life isn’t always easy. Add to that the mental and physical issues that some veterans are left with after service, and finding work can be next to impossible. Across the United States, homeless veterans are trapped on the streets by a lack of employment. With your help, they can once again be a productive part of the society that they served to protect.