13 years ago, a US Army brigadier general was pen-pals with a group of kindergarten students. Now, 13 years later, he surprised the now-high school seniors with a visit to their school. According to Fox29, when Brigadier General Vincent Buggs was on his second deployment in Iraq, he began exchanging letters with the kindergarten students at David Emanuel Academy – a Christian school in Georgia. At first, he began his correspondence as a favor to help them out with a gingerbread man project, but then over the years continued – even sending them flags that were certified to have flown in Iraq as a gift. The meet up pictures were posted on the David Emanuel Academy Facebook page. 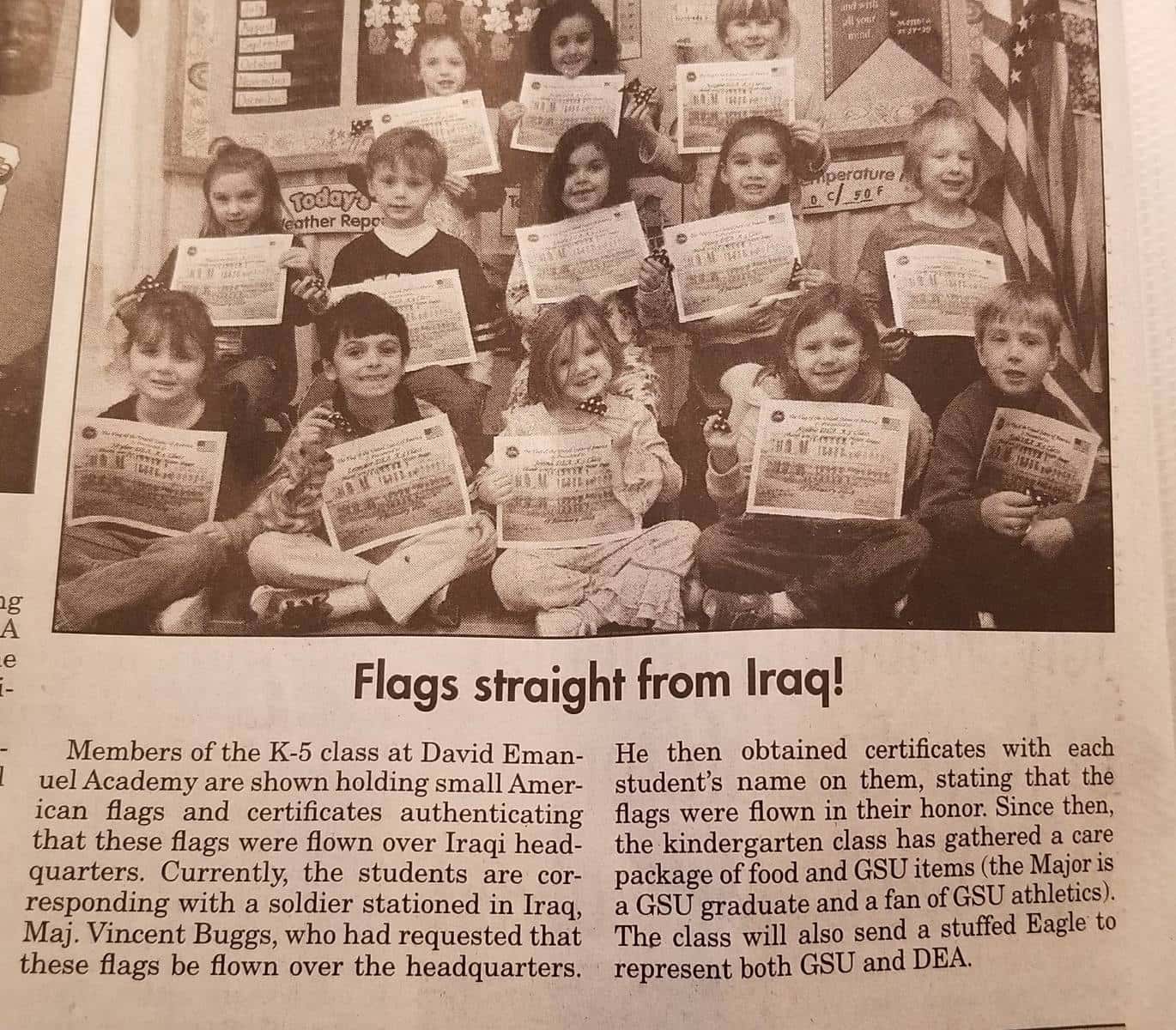 Vincent Buggs, from Tampa, Florida, was a graduate of Georgia Southern University, where he consistently remained in touch with the alumni office through the years. One day, a Staff member in the alumni office asked Buggs if he could help out a young relative of hers with the class’ gingerbread man project which focused on other cultures. Buggs reached out to Michelle Lamm, the kindergarten teacher, and said he was more than happy to help. Part of the project entailed him sending pictures of a gingerbread man in the surroundings of his then-deployment, which was Iraq. However, after the project was done, he continued his correspondence and remained the class’ pen pal. Over the years both he and the students have exchanged letters and gifts. Buggs, who has five daughters of his own, really valued the letters.

According to BL, 17-year-old student Jenna Mosley said, “I remember he would always send Kinder chocolates and that was so exciting.”

“I started taking the gingerbread man and writing stories to the kids and sending them back to them, and then it kind of morphed because the kids started sending me stuff,” Buggs stated. “And then over the years as I was traveling I would send them something, and then after a while, we were just coordinating back and forth.”

As a gift to the students, Buggs sent them American flags flown in Iraq. The flags came with certificates of authenticity. The kind gesture even made it to the local paper.

Buggs even claimed that the letters sometimes helped him get through the toughest portions of his deployment.

“When you’re sitting in your [bunker] by yourself and you’ve been deployed a few months and the loneliness is there, the letters from home, you get them and it changes your perspective of what you’re dealing with,” Buggs said.

He added, “Your mind forgets what’s going on around you and have tunnel vision going through these letters.”

As part of the military appreciation weekend, Buggs paid his alma mater, Georgia Southern University, a visit. Since the David Emanuel Academy was just 30 minutes away from the university, he decided to surprise the once kindergarten students with a visit. As Buggs was about to meet them for the first time in person he was feeling “more than nervous.”

“I had the anxiety of how it would play out because you’re a stranger and they don’t realize the impact,” Buggs said.

The high school seniors were delighted to meet him, and they shared jokes with their former pen pal. Buggs thanked them for their letters, as well as reminded them about the importance of kindness.

The brigadier general also posed for pictures with the high-school seniors. Buggs found the meeting to be very pleasant and he suggested other veterans do the same if they can.

“I really, really suggest to service members that if you get an opportunity to personally face-to-face thank someone, take that opportunity. It may change somebody’s life by going and saying thank you,” he said.

The David Emanuel Academy posted the pictures from the heartwarming meeting on their Facebook, along with a little message that read, “DEA had a wonderful surprise visitor this morning! Years ago (kindergarten at DEA), these children formed a special bond through pen pal letters to then, Major Buggs. Today, also Senior Day at DEA, BG Vincente Buggs 364th ESC Commander paid them a special surprise visit. The children enjoyed hearing how their simple gestures years ago impacted life in such a big way. What a treat to have Gen. Buggs reminisce fondly of a special time for all of them. Small gestures of kindness really do impact in mighty ways!”