Classical composers do not usually come to mind as people who might be combat veterans. But the 20th century was a century like no other what with two worldwide wars that resulted in over a hundred million deaths between them and the complete reshaping of the modern world. All of this happened within the first 50 years of the century.

For some reason, classical music became a part of my own recovery from my own wartime experiences in Vietnam. The music of the 60s was already a part of our Vietnam memories. Much of that music spoke to us about the times we were living in in the form of powerful lyrics and the sounds of the rock bands during those years. But my mind needed some peace, some release from the noise, both of the war and of the craziness we came home to at that time. I found that in classical music.

I was untutored in what that music was about and the theories of composition, all I knew was that it quieted my soul. It had no words, just beautiful sounds. It took me places that were more peaceful. It became very important to me.

One of the composers that really got my attention was a 20th century English composer by the name of Ralph Vaughan Williams. There was one piece in particular that I went to over and over again, and still do, his “The Lark Ascending.” If you want to know what I am talking about it can be found on Youtube. Take sixteen minutes to listen to it and you’ll get what I mean. 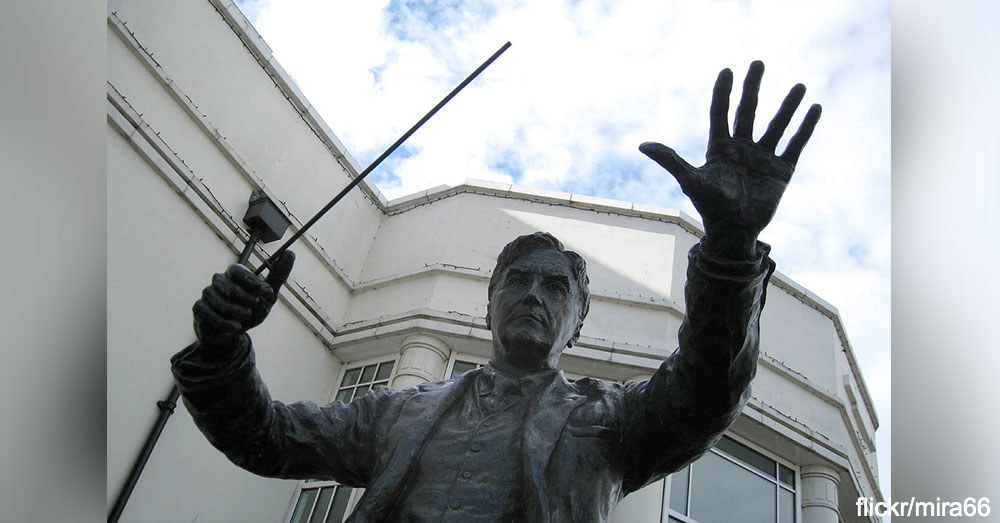 Recently, I found out that Vaughan Williams was a WWI veteran. He had already achieved some notoriety as a composer before the outbreak of that war, but when it broke out in August of 1914 he, though already 42 years of age, dropped everything, abandoned all of his composing for the duration of the war. He enlisted as a private in the Royal Medical Corps the following New Year’s Eve. The duties of medical orderlies at that time were very much like those of our medics and corpsmen today. They were involved in rescuing, caring for the wounded and the dying in battlefield conditions.

Vaughan Williams did this work both in Salonika in Greece and, later, on the French Western Front. He was 45 years old in 1917 when he was commissioned a 2nd Lieutenant in the Royal Garrison Artillery, where he commanded a unit of artillery firing 60 pounder “Big Guns.” Later in his life his growing deafness was attributed to his time commanding that artillery unit.

At one point, while he was on the Western Front, a retreat was ordered and Williams was put in charge of moving 200 of the horses that were used to move artillery and heavy supplies. Vaughan Williams survived the war but lost many of his friends and fellow composers who had also joined in the fight. He wrote in a letter to a fellow WWI veteran and English composer, Gustav Holst, “I sometimes dread coming home to normal life with so many gaps…Out of those seven of us who joined up together in 1914 only three are left. I sometimes think now that it is wrong to have made friends with people younger than oneself.”

These words echo many of the thoughts of returning veterans from every war. We wonder, too, why we survived when so many good men, so many of our friends, died.

When we came home we had to find ways to cope with the memories that were so fresh and that still haunted us. Most of us found ways to do that with the help and understanding of family and friends. Some of us found it much harder. And some of us fell into habits that only exacerbated our unresolved angers and pains.

Vaughan Williams had to find a way to deal with those memories too. He fell back on his skill, his love of music. 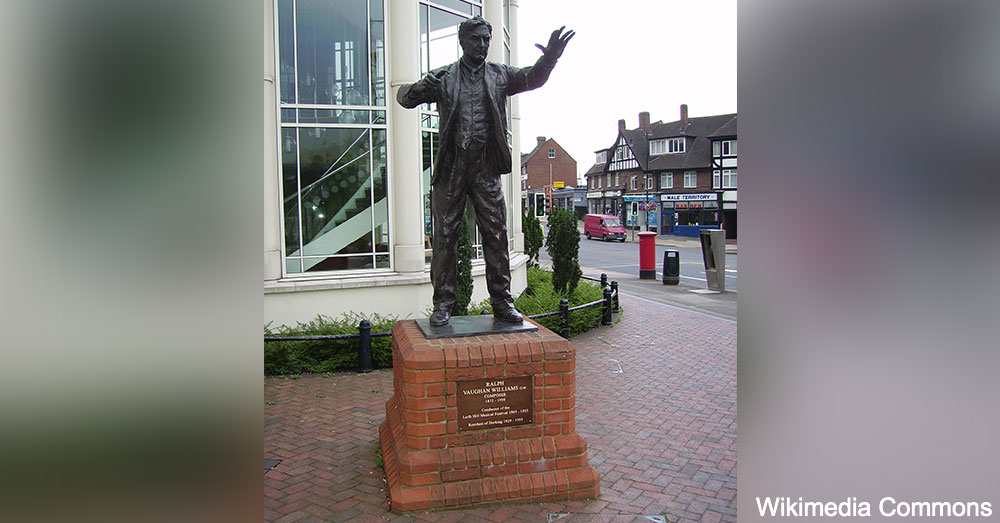 A statue of Ralph Vaughan Williams in England.

Finally, years after the war was over, he would compose two pieces of music that turned those memories into haunting, lyrical symphonies incorporating the full range of emotional responses to his wartime experiences. Those two pieces were The Pastoral Symphony and his Dona Nobis Pacem (Give Us Peace). You might want to take a half hour to listen to it. It is a quiet, haunting work of misty strings and woodwinds. The final movement, called the “Last Post,” includes a ghostly solo female voice. These are both beautiful to the ear, yet, you can also hear the pathos of war in it.

Vaughn Williams said of his pieces, “It’s really wartime music, a great deal of it incubated when I used to go up night after night with the ambulance wagon at Ecoivres.”

He would go on to describe how as the sun rose over the hills, the vista would open up before him revealing a surprising beauty of landscape. Yet, that landscape, for all of its beauty, provided only a brief respite from the terrible reality and carnage of the war. 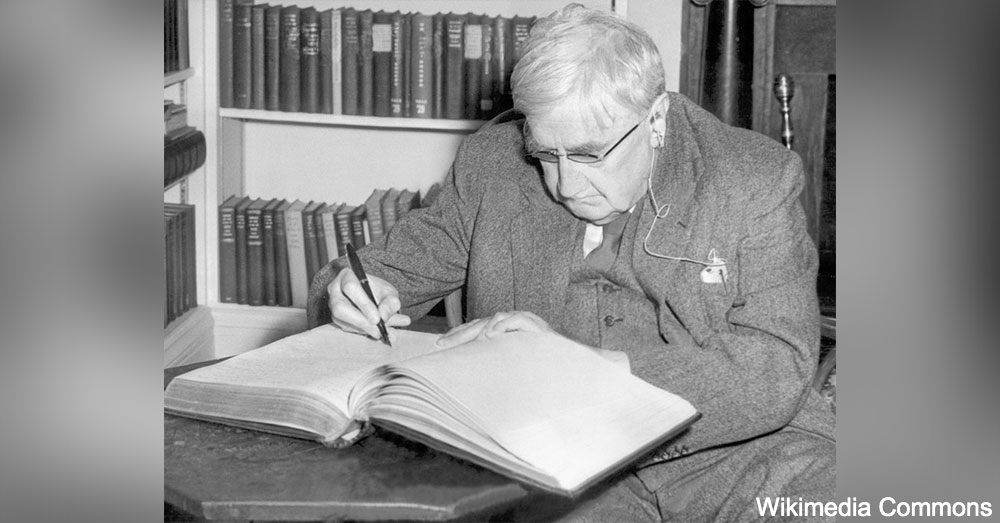 When I listen to the Pastoral Symphony, it brings back a memory to me. I remember being on a six-man reconnaissance patrol up near Khe Sanh after the siege. We had set up a harbor site on top of a small hill the night before. Two of us were on watch as the sun rose over the valley we were in and it exposed a landscape of elephant-grass-covered hills, with green, jungle-draped mountains on both sides. Mist rose like smoke from the jungled mountains, and the hills and lowlands of the valley were lit golden in the early morning sun. All of a sudden we became aware of what seemed like a dream image.

There before us was a huge stag deer with maybe a six-point rack of antlers, about a hundred yards away from us. It was a dark silhouette in the sun. It stood there quiet and serene, full of the confidence of its surroundings.

This in a landscape heavily pockmarked with countless bomb craters, as was that whole area of Quang Tri Province. We couldn’t believe our eyes. How could something so beautiful exist in that hell of a place, in that environment of destruction?

The American philosopher, George Santayana, once wrote, “Even in the midst of war there is room for thoughts of love.”

Vaughan Williams captures this same idea in his music. Even in the midst of war’s carnage and madness, there is always the potential to be surprised by beauty.

Beauty, whether that be in the form of a natural landscape, a painting, or a piece of classical music, is natural to the human soul. War, though it is an all too common human experience, is not. Sometimes beauty can bring us back from the dark places of our wartime experiences. Ralph Vaughan Williams, saw the worst of war’s madness as a medic on the Western Front. He too had to come back to himself, and music was the way he did that. Music’s power is very recognizable to us all.