Over 70 Years Later, Only 22 Of This Fateful Ship’s Sailors Remain, But Now It’s Been Found

One of the biggest tragedies in the Pacific at the very end of WWII was the loss of the heavy cruiser, USS Indianapolis (CA-35). She had been on a top secret mission related to the delivery of important components of the first atomic bomb used in combat named, “Little Boy,” to the island of Tinian. She had just dropped off her secret load and was sailing alone in the Philippine Sea when tragedy struck.

The date was July 30, 1945, just short of a week before Little Boy would be dropped on Hiroshima, Japan. Because of the secrecy of her mission, the Indianapolis was sailing alone when she was attacked by a submarine of the Japanese Imperial Navy. She took a devastating hit from two torpedoes from that Japanese sub and sank within a mere 12 minutes. Of the 1,196 crewmen aboard, 300 went down with her into the depths of the sea. 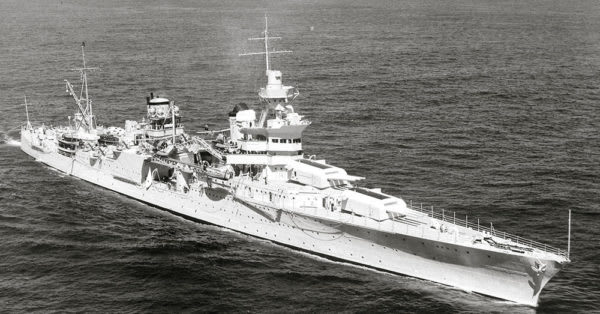 She went down so fast that most of the survival boats went with her and she was unable to get a message out as to their situation or location. 900 men who had survived the sinking clung to whatever floating debris they could get hold of and waited. Because of the nature of the mission, the Navy did not report her missing when she did not show up at her designated rendezvous with the rest of the fleet.

Because of the nature of their mission, sailors aboard the USS Indianapolis did not want to alert the enemy of anything. The remaining 900 men would float out in the open sea alone for the next 5 days without any rescue efforts being undertaken, because no one knew what had happened to her or where she was. 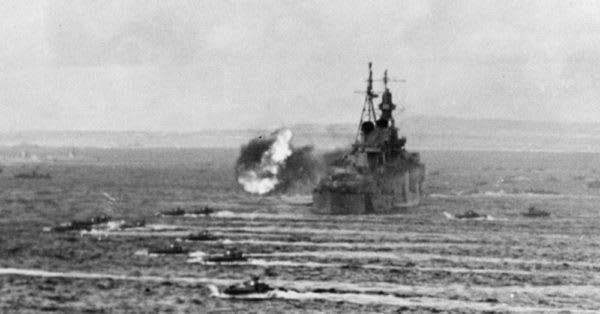 Source: Wikimedia Commons
The USS Indianapolis during the shelling of Saipan.

During those harrowing days, those men suffered the effects of exposure, dehydration, and drowning. But worst of all, the were being taken one by one by sharks. The cries of men scattered about over a wide area of the sea could be heard day and night.

Of the 900 who survived the original sinking, only 300 would survive the terrible ordeal and be rescued.

One can only imaging what it must have been like for those men floating and out there, unknown to the rest of the world for those five long days. The immensity of the sea and its awesome power both on the surface and its unknown dangers lurking and skulking below, must have been terrifying indeed. There are only 22 of those survivors that remain alive with us today. 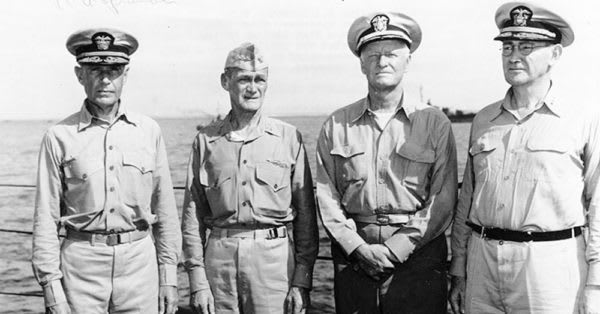 The story of the USS Indianapolis has been told in books and in a Hollywood movie. Now, over the weekend, news has come out that parts of the hull of the USS Indianapolis have been found by a research team funded by Microsoft co-founder Paul Allen. Allen had recently purchased and refitted a 250 foot research submarine vessel called the Petrel. He had it equipped with all the latest sub-sea research equipment available and it is capable of diving to 6,000 meters, or about 3 miles. This was important because the wreckage of the Indianapolis was found at 5.5 kilometers below the sea surface, or about 3.4 miles.

The surviving members of the crew of the Indianapolis and those who went down with her, or lost their lives in their fight for survival over those 5 days in early August of 1945 can now have some closure with this find.

Allen said in a report of the finding: “To be able to honor the brave men of the USS Indianapolis and their families through the discovery of a ship that played such a significant role in ending WWII is truly humbling. As Americans we all owe a debt of gratitude to the crew for their courage, persistence and sacrifice in the face of horrendous circumstances.” 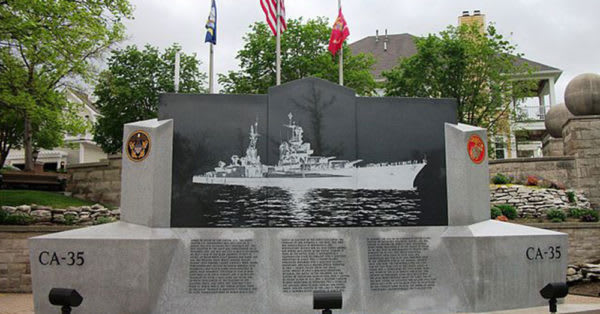 Source: Wikimdia Commons
A memorial to the USS Indianapolis.

The Veterans Site offers its respect to the memory of those who went down with the USS Indianapolis, to those who died during those five harrowing days on the sea and to those who survived and remain with us today. Your service and your sacrifice in helping to bring an end to the war against Imperialism in the Pacific will never be forgotten. You will always be heroes to us and to the nation. Bravo Zulu to you all.

We wish to thank Paul Allen and all those involved in the efforts to find the remains of the USS Indianapolis. You have helped to give some needed and deserved closure to the 22 men who remain with us today, and to the families of those who perished. Bravo Zulu to you too.