The USS Enterprise (CVN 65) is the latest iteration of eight ships bearing that noble name. She has had a storied history of her own over the last five decades that she has been in service. She will be decommissioned at a private ceremony before a small crowd of maybe 100 people on February 3, 2017.

She is to now enter something called the Ship-Submarine Recycling Program, but that is just a fancy name for the scrapyard.

The Big E, as she has been affectionately known by the sailors who served on her is a Enterprise class carrier. As sailors are prone to do, depending on their experiences aboard, they had many other nicknames for her too. Many are humorous, others more visceral, but they all knew her as home for some period of time over the last 50 and more years.

Her keel was laid down in 1958 and she was launched in 1961. She was commissioned for service in 1962 and served actively until 2012. Her homeport was the Naval Station Norfolk, Virginia.

Over the course of her five-decades-long-career the USS Enterprise saw most of the world and took part in most of the major wartime events since the 1960s. Her first action was during the Cuban Missile Crisis where she showed her might to the Russian navy and took part in the successful effort to turn back Russian warships and ships carrying missiles to Cuba. That was less than a year after she was commissioned. In February of 1962, she acted as a tracking and measuring station for the flight of “Friendship 7, Project Mercury space capsule in which Lt. Col. John Glenn made the first orbital space flight. In 1964 she circumnavigated the globe on a mission to show her speed and her might in an operation called, “Operation Sea Orbit.”

In the following year, 1965, she was deployed to Vietnam. She carried 2 squadrons of F-4 Phantoms and 4 squadrons of A-4 Skyhawks, and an assortment of support aircraft. This would be only the first of 6 combat deployments she would make to Vietnam. In 1968, while serving with Bravo Co., 3rd Recon Bn., 3rd Mar. Div., I was one of 5,000 Marines and Navy Corpsmen on the base at Khe Sanh during the Tet Offensive siege that lasted 77 days.

During those days, we would watch F-4 Phantoms and A-4 Skyhawks, along with others fighter planes pounding away at the NVA forces who were engaged in the siege battle against us. They swept in over us, bringing their speed, noise, and their destructive power to bear on the enemy, even right up to our perimeters. Many of those F-4s and A-4s were off of the Big E and other aircraft carriers. We who endured that siege will never be able to say thank you enough to those brave pilots. They endured the gauntlet of heavy anti-aircraft and heavy machine gun fire every time they came over that valley in between the mountains that were thick with enemy troops. They were extremely instrumental in helping us survive that time.

After Vietnam, the Big E was the first U.S. carrier to fly the F-14 Tomcats. In the 1980s she was involved in two different operations: “Operation El Dorado Canyon” in Libya, and “Operation Preying Mantis” near Iran. When 9/11 happened she was deployed to the Middle East and had the honor of launching the first retaliatory strikes against both al-Qaeda and the Taliban in Afghanistan. They did it quickly and with great effect. And she has been deployed to the Middle East and the Persian Gulf many times since then with her air-wing participating in the War on Terror from the beginning. 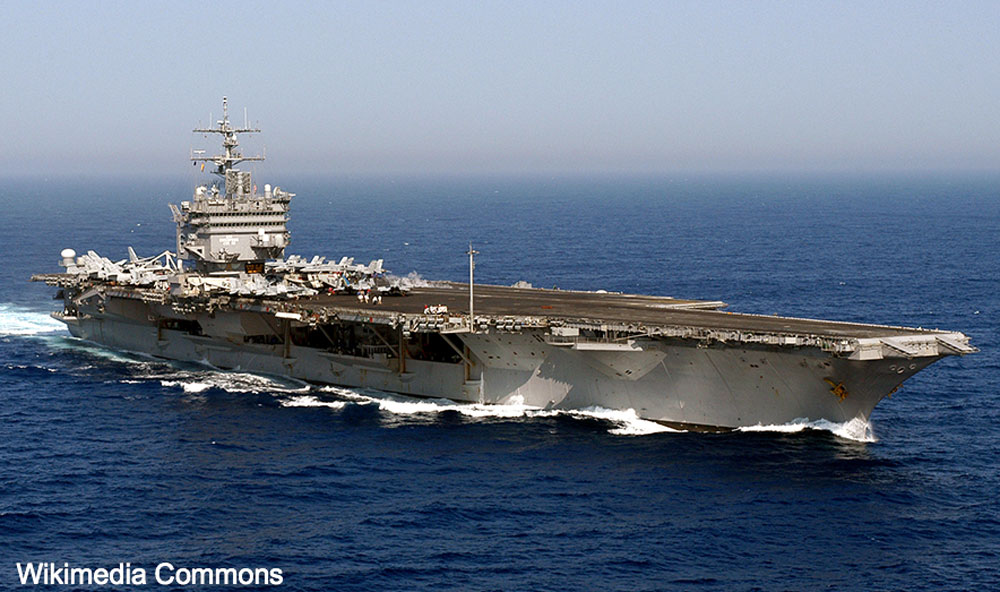 In 2009, the decision was made to decommission her. The Big E was the successor of the Nimitz class USS Enterprise (CV-6) and she will not be the last of that noble and historic name. She will be replaced by a Gerald R. Ford class carrier (CVN 80), which will be built starting in 2018.

To all those sailors, officers and airmen who served on the Big E, the USS Enterprise (CVN 65), we offer you our thanks and respect. You served on one the most powerful and advanced ships of the time and in some of the most challenging wars of our day.

Though I was a Navy Corpsman, I never saw a day of sea duty. I do not know what shipboard life is like, because most of my time in the Navy was spent with our Marine Corps brothers as an FMF Corpsman. Still, I can imagine that watching a noble ship, one on whose decks you served in war and/or peace, go into the boneyard must cause a lot of varied emotions for you. You can always be proud of your time and service on her. Those of us who benefitted from the bravery and skill of your air wing pilots and their support crews along with those sailors who launched and landed them on her pitching decks, will remember you with both deep respect and honor.

We wish you all, and those who will serve on her successor,