The United States Coast Guard recently made a record-setting seizure of drugs in the Pacific Ocean as part of Operation Martillo, an international effort to stop illegal drug trafficking from Columbia and other Central American countries. A total of 7 tons of cocaine and 14 pounds of marijuana were intercepted, estimated to be worth $135 million. In addition, 24 suspected smugglers were apprehended during the recent missions.

The crew of the USCG’s Cutter Thetis made a large discovery during its 68-day patrol with the Pacific Tactical Law Enforcement Team. After a military plane spotted debris floating in the water, the Thetis set out to investigate. What they found were 26 bundles tied together containing 1,800 pounds of cocaine worth $53 million. The crew also found something tangled in the ropes binding the packages together — a trapped sea turtle.

“There were some marks on her neck, so she may have been there a day or two,” said Commander Jose Diaz.

The crew of the Thetis immediately went to work freeing the loggerhead turtle. 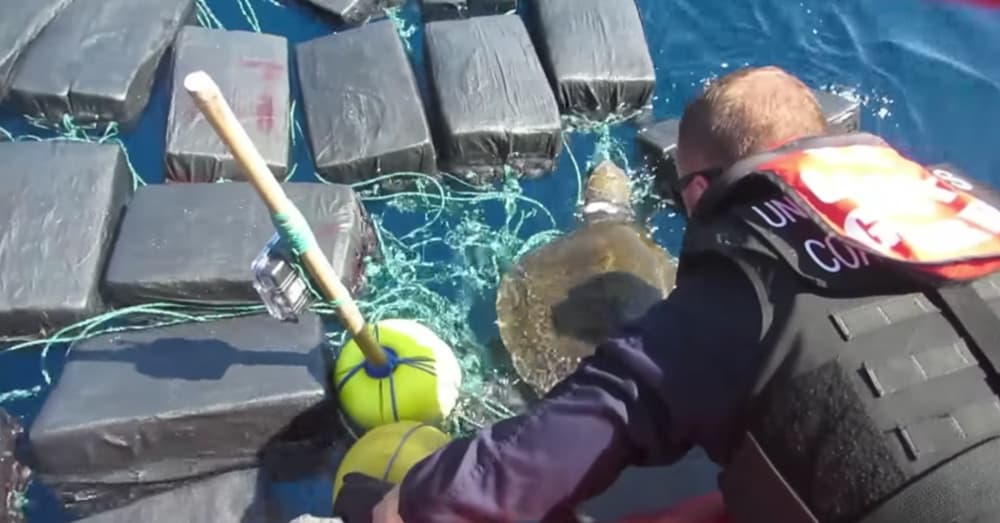 Screenshot/U.S. Coast Guard — Guardsmen work to free a sea turtle from bundles of cocaine found in the Pacific.

“Coast Guard Ens. Mark Krebs, the pursuit mission commander, said that as his team arrived on scene with the jettison field, they immediately noticed the entangled sea turtle,” according to a statement by the Coast Guard. “They saw significant chaffing from the lines on his neck and flippers. They briefed the commanding officer and went to work, carefully cutting the lines wrapped around the sea turtle and then eventually freeing him.” 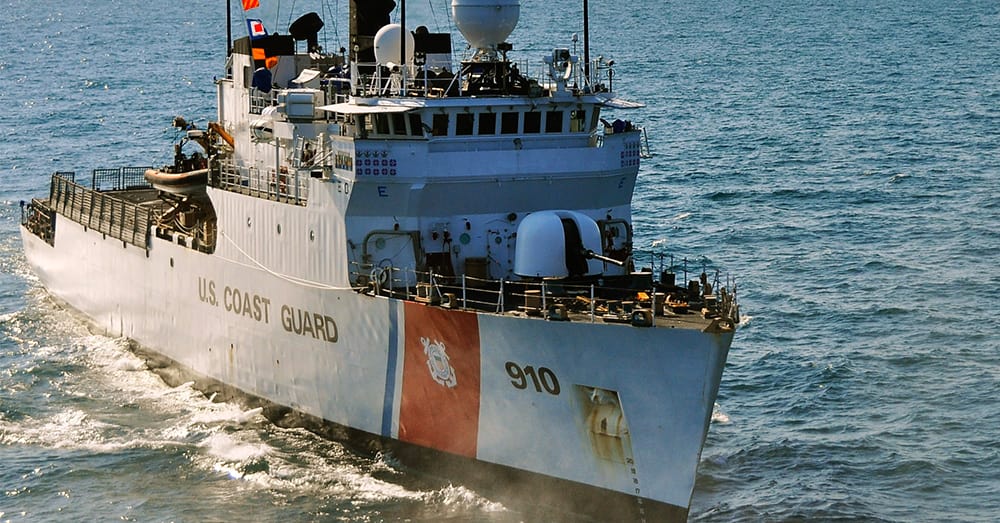 The guardsmen were able to free the sea turtle, seize the floating bundles of cocaine, and remove 75 feet of line to prevent more sea life from getting snared or harmed.

Loggerhead sea turtles are an endangered species of marine life. Named for their large heads, adult loggerheads can weight 250 pounds and reach 3 feet in length. They have populations in several regions of the world.

As for the bundles of cocaine which trapped the sea turtle, they were likely thrown overboard by smugglers in an attempt to evade the Coast Guard, according to Commander Diaz. “They probably felt the heat coming and got rid of it,” he told NBC News.

Watch this amazing Coast Guard rescue in the video below!

Click through to the next page to read about the Coast Guard’s latest record cocaine interception!