Guarding our coasts is a very specific way to describe the job of the U.S. Coast Guard. But the country’s general population is oftentimes unaware of their actual duties.

The Coast Guard’s job is to defend us from enemies but also against the threat of drug dealers, stopping illicit substances from entering the country, which is what happened after a Navy plane spotted one of the most incognito drug threats to our nation: the narco-sub.

What happened next lead to one of the biggest drug busts in U.S.C.G. history… 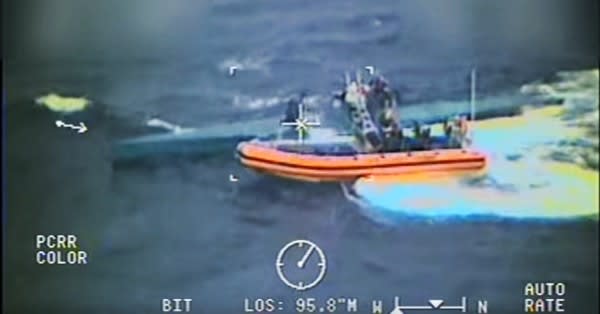 The first question you might be asking yourself is, what is a narco-sub? They are homemade semi-submersible vessels that are often painted the exact color of the water in order to camouflage them. The word semi-submersible is key here; the only part of these subs that protrude’s from the water is the vessel’s smoke stack. This allows drug dealers to smuggle thousands of pounds of narcotics into foreign countries in a manner that’s extremely hard to detect. The DEA actually estimates that in 2012, about 30% of drugs coming into the U.S. through maritime sources in the Andean region are coming from narco-subs. Unless you have the might of the U.S. Armed forces on your tail!

Which leads us back to the history-making bust…

On July 18th, a Navy plane spotted a 40-foot, blue narco-sub about 200 miles off of the Pacific coast of Mexico and alerted the Coast Guard to its presence. The U.S.C.G. has made busts like this before but they weren’t expecting this one to be so huge!

They detained 4 smugglers on board and began unpacking pound after pound cocaine from the vessel’s hull. According to NBC, they managed to retrieve 275 bales of cocaine weighing about 12,000 pounds. The sub then sank with the remaining 4,000 pounds of product still inside of it, preventing a total of 16,000 pounds of cocaine from entering the U.S. Officials are estimating that the amount of cocaine is valued at $181 million, which would make it the biggest narco-sub bust in U.S.C.G. history!

The seizure of this narco-sub not only proves the might of the Coast Guard,

but it illustrates how the U.S. military machine works together to protect us from those who wish us harm. With the Navy’s help, the Coast Guard was able to keep those drugs from being sold in our communities. This bust reminds the general public how hardcore the Coast Guard is, but it also sends a very important message to the drug dealers sending out these narco-subs: “The Coast Guard’s comin’ for ya’ and there’s nowhere to hide!”

…not even the ocean.