This is a story of both tragedy and heroism. It is about the sinking of the diesel powered Navy submarine designated S-51 and the efforts to recover her from the bottom of the Atlantic Ocean near Block Island, south of the coast of the state of Rhode Island.

The tragedy occurred at night on Sept. 25, 1925. The Navy submarine, S-51 had left the Naval base at New London, Connecticut earlier in the day for routine sea exercises. Her crew was made up of 36 officers and crewmembers. Her commanding officer was Lieutenant Rodney H. Dobson.

That night, while much of the crew was asleep in their bunks, she was cruising on the surface with her starboard and port lights on. The watch spotted another ship in the distance. It was the merchant ship City of Rome.

Why the City of Rome did not see S-51’s lights, or why the Navy sub did not maneuver out of the way earlier is not fully known, but both became aware that it was too late and the City of Rome struck the USS S-51 and opened a huge gash in her hull. The seawater rushed into her with such terrible speed and force that she sank swiftly settling on the bottom of the sea, 132 feet beneath the surface.

Only three of the S-51’s crew survived. They were picked up by the City of Rome and taken to New York.

This accident could not have come at a worse time for the Navy. They were already under heavy criticism for previous accidents. Only a short time before this event a Navy Commander was briefly lost at sea while attempting to fly a seaplane to Hawaii from the West Coast. He was later found and rescued. And the Navy had also recently lost an airship (dirigible) and all 14 of its crew members in a crash in Ohio. With the news of the sinking of the S-51, the public began demanding answers. 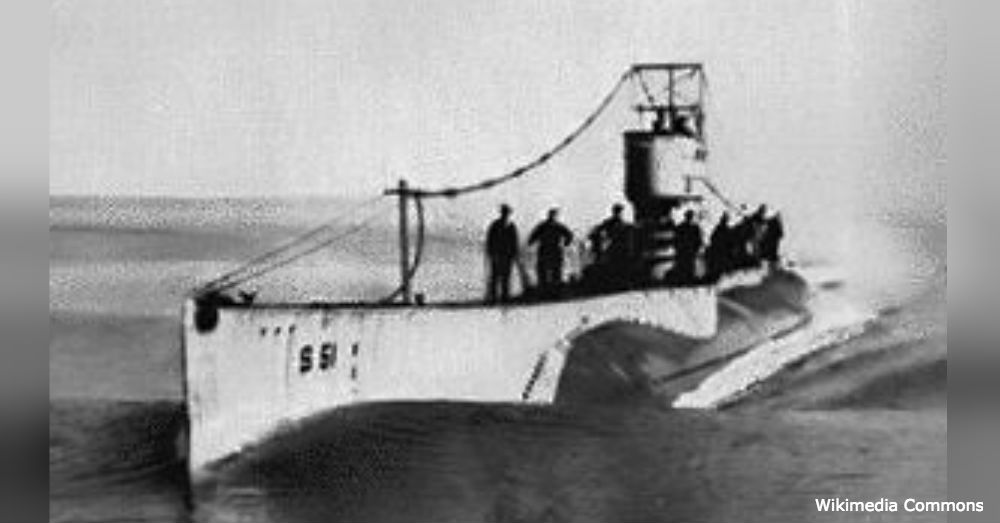 The Navy put Rear Adm. Edward Ellsberg in charge of the effort to raise the S-51 from the bottom of the sea and to bring back the bodies of the crew. In his book, On The Bottom: The Raising of Submarine S-51, he says of it, “Nothing that the ingenuity of man has permitted him to do is more unnatural than working as a diver in deep water. As a result, if a vessel sinks a few hundred feet beneath the surface of the sea, she becomes inaccessible as if transported to a distant star.”

The efforts to raise the submarine proved to be heroic in scope and nature. There is one story about a diver that sent a chill of dread through me as I read it.

A diver by the name of Francis Smith was engaged in an effort to create a tunnel under the partially buried hull of S-51. They were going to pass heavy chains under her hull through these tunnels in order to be able to lift her to the surface. It was impossible to do that work in the bulky diving suits and helmets with picks and shovels, so they decided to use firehoses blasting high pressure water to burrow a tunnel through the mud.

Smith was halfway beneath the hull when the tunnel behind him collapsed. The people above noticed that something must be wrong because the firehose leading over the rail was “throbbing violently.” Ellsberg used the telephone connection to Smith’s helmet to check on him and to ask if he should turn off the hose.

According to Adm. Ellsberg’s account in his book, Smith literally screamed back, “No! For God’s sake keep it going! The tunnel has collapsed behind me.”

It is not hard to imagine the kinds of thoughts that must have crowded Smith’s mind in those moments. There he was in a narrow tunnel of mud, beneath the 1,230-ton hull of the sub, in the dark, with the way forward still unopened by the pressure hose, and the tunnel he had just made behind him suddenly collapsed. Somehow he maneuvered the firehose between his legs pointing the hose with its heavy stream of pressurized water behind him, guiding it with his feet.

Smith was eventually able to escape the tunnel. What did he do next? He leaned up against the hull, rested a few minutes, then returned back into the tunnel to complete the job. That kind of courage and determination is incomprehensibly stunning.

It took ten months to complete the effort to raise the S-51 and to recover her crew. Since then, many things were learned. New technologies would eventually be designed and created by Navy personnel that would make survival and rescues of sunken submarine crews more effective and viable.

Though the loss of the S-51 is a clear tragedy in every sense of the word, the heroic effort to lift her to the surface again and to recover her crew is one of epic heroism. History is replete with stories of failure and loss that lead to new technologies to prevent or to rectify them more speedily and successfully if, or when, they occur in the future. The story of the sinking of the S-51 is one of those stories.

The Veterans Site wishes to honor those who were lost to the bottom of the sea in the S-51 on that tragic day in 1925. We also honor the ingenuity and the heroism of those who were engaged in the mighty efforts that were undertaken to bring her back to the surface and to bring her crew members home to their families. The Navy Submarine Service is the better, safer, and more effective because of all those who were involved then and who have been involved since then.