On July 26, 2017, President Donald Trump announced via Twitter that transgender Americans will be banned from serving in the United States Military.

The president justified his decision based on the “tremendous medical costs and disruption that transgender in the military would entail,” according to the announcement.

“After consultation with my generals and military experts, please be advised that the United States government will not accept or allow transgender individuals to serve in any capacity in the U.S. military,” President Trump wrote. “Our military must be focused on decisive and overwhelming victory.”

According to a recent study by the RAND Corporation, any medical costs for transition related health coverage would be quite low, roughly a “0.04- to 0.13-percent increase in active-component health care expenditures.” In comparison, Business Insider notes that based on its 2015 budget, the Pentagon spends nearly five times that in health coverage for Viagra. 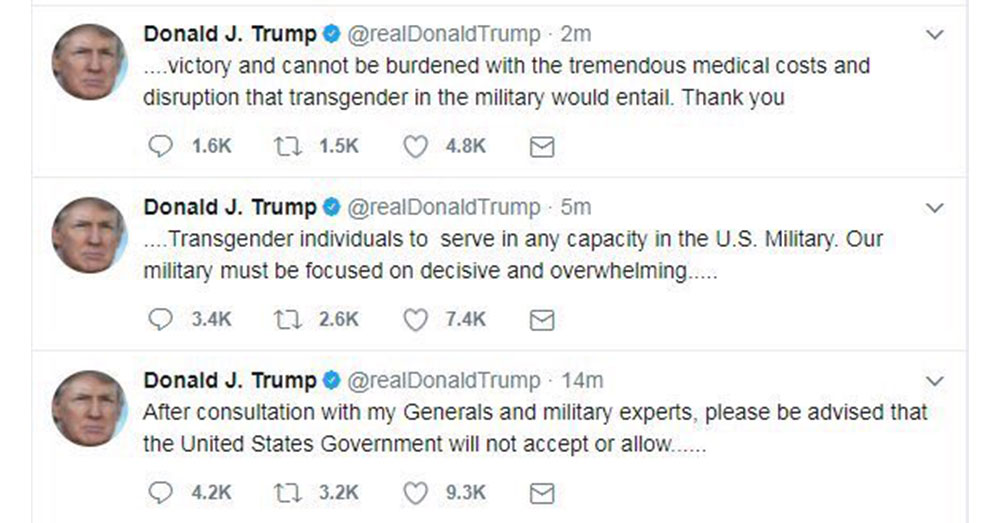 The president’s announcement comes a year after President Barack Obama’s Defense secretary Ash Carter cleared the way for transgender individuals to join and openly serve in the military.

“This is the right thing to do for our people and for the force,” Carter said in a June 30, 2016 DoD press release. “We’re talking about talented Americans who are serving with distinction or who want the opportunity to serve. We can’t allow barriers unrelated to a person’s qualifications prevent us from recruiting and retaining those who can best accomplish the mission.”

The policy was to have been implemented no later than July 1, 2017.

In June of 2017, the policy to allow transgender Americans to serve openly was delayed by Defense Secretary Jim Mattis. Mattis claimed it would take another six months for military leaders to consider the policy’s implementation and impact.


Estimates from the 2016 study by the RAND Corporation suggest that President Trump’s new ban on transgender participation in the military could affect more than 2,450 people currently enlisted in active duty, out of a total of 1.3 million active service members.