This story originally appeared at AWM.

A businessman man was waiting for his plane to take off when he noticed when the United States soldier walk board plane, wearing his uniform. The businessman, Brad, was pleased when the soldier sat down in the seat next to his. He greeted the member of the U.S. Army, who introduced himself as Mr. Glascott. The two shared a few kind words and established a friendly connection.

During their flight, Glascott had said he was on leave and headed home. The soldier and father was planning a trip to Great Wolf Lodge with his family. It was his son’s ninth birthday, and Glascott wanted to give his son a great time they all would remember.

After the flight landed, the two men parted ways. Glascott felt good about the conversation he had with the businessman but didn’t think about it again. He soon found his family waiting for him waiting at the gate. Not long later, the family went to the lodge to celebrate the boy’s birthday. But when they got to the resort, Glascott was greeted with a surprise.

The receptionist at the front desk told him before he could check in that there was a note on his account. 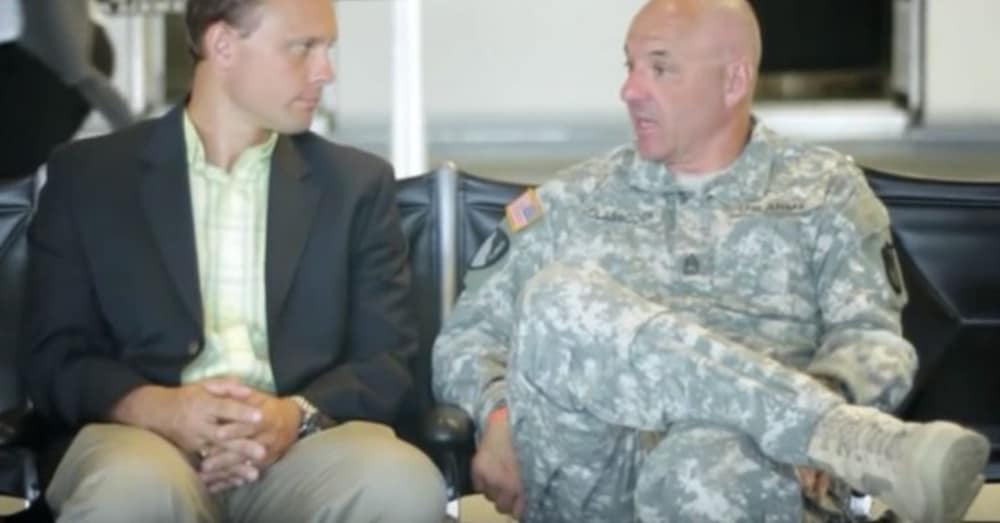 Glascott was worried something had gone wrong with the reservation. He didn’t know what he would do if the vacation and birthday plans for his son were ruined.

When asked, the receptionist said, “You have a message on your account from Brad.”

Glascott had no idea who this Brad was. Not only was it a mystery to him, the whole family was puzzled. The receptionist told Glascott that Brad was sending his good wishes to the family from Atlanta. Then it clicked for the soldier. Brad was the businessman he had met on the plane.

While he thought it was thoughtful that Brad had left his family a note, he was stunned when the receptionist said that there was more.

The Army dad was all ready to check into the resort. After getting a nice note from the man he met on his flight, Glascott pulled out his credit card to pay for the stay. The receptionist waved away Glascott’s card.

“Your money is not good here, soldier,” she said.

Now Glascott was confused. He started to object having never faced this issue before. The receptionist interrupted before he could say anything.

“I didn’t mean it like that,” shet said. “Your account has been pain. In full. Brad wants you and your family to enjoy your stay at Great Wolf Lodge.”

Glascott couldn’t believe what was happening. Brad had given his family a great gift. His eyes began to water. He was overwhelmed. After years of service, it was a total stranger who let him know he — and his service — was greatly appreciated.

While the family enjoyed the free stay at the resort, Glascott’s son got the best gift of all: time spent with his dad home from deployment.