One Of The Bloodiest Battles of The Vietnam War: The Siege At Khe Sanh

Every year at this time, for that last 51 years now, I begin to think about one of the most life-changing periods of my life.

I had been stationed for about a year at Camp Lejeune, the sprawling Marine base in North Carolina as a Fleet Marine Force, Navy Hospital Corpsman. I had gone through the Marine Corps, Field Medical Service School there, after which I was assigned to a Sick Bay with 2nd Force Service Regiment. In mid December 1967 I received my orders for Vietnam.

I was able to be home for Christmas on a 30-day leave before heading to Vietnam. 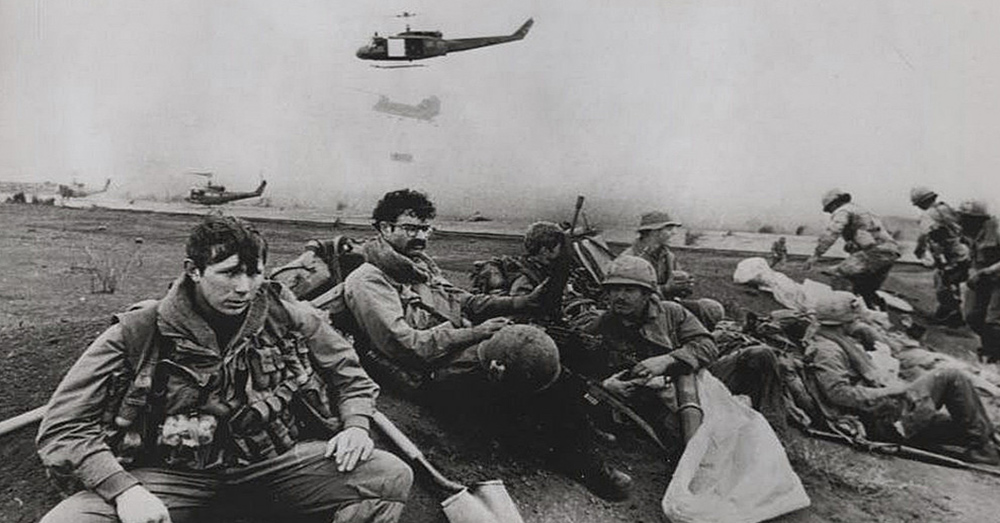 The unit I would join when I arrived in Vietnam, Bravo Co. 3rd Recon Bn., 3rd Marine Division, was already at Khe Sanh with the 26th Marines. They had been there during the late summer and the fall of 1967 and had been conducting regular 6-8 man recon patrols around the Khe Sanh base. During that time, and especially in the months of November and December, they had been seeing more and more of the enemy and had been coming into contact more and more often and closer and closer to the base. 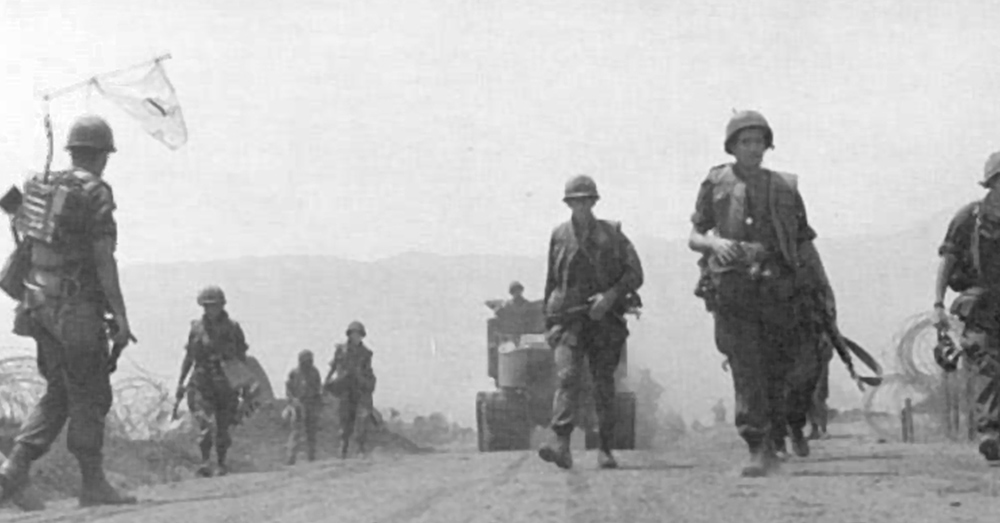 The higher ups in-country and at the Pentagon at that time were deciding whether to pull out of the base or to reinforce it and the decision was finally made to reinforce the 26th Marines at Khe Sanh right about the time that the siege began. It was at this time that I arrived in country at Phu Bai, then up to Dong Ha, and from there to Khe Sanh to join my unit, Bravo Co. 3rd Recon.

This video will give you the perspective of two of the men who were there with the rest of us during the 77-day-long siege that began on January 21, 1968, some 10 days before the Tet Offensive began over the full length of South Vietnam. We would finally be relieved and be taken out of Khe Sanh on April 9, 1968. 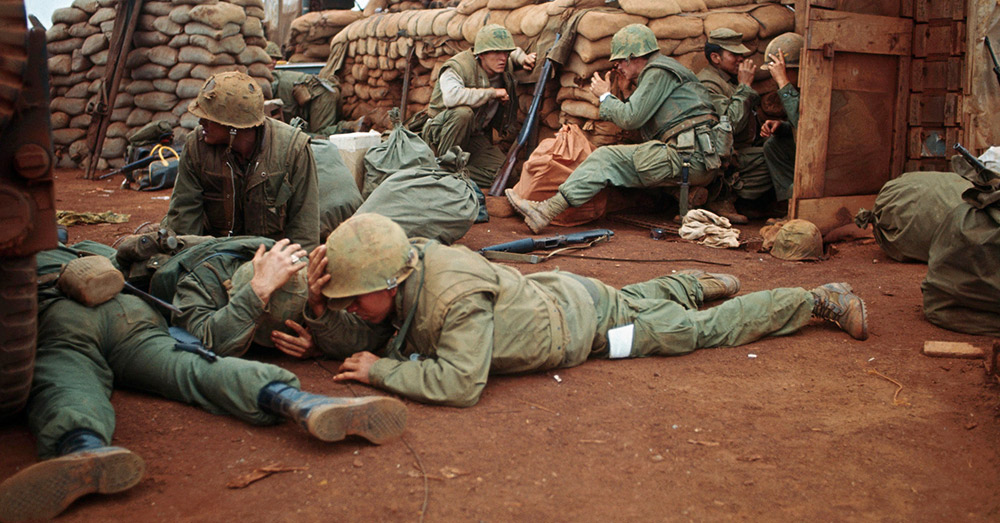 Source:flickr/manhhai
U.S. Marines lie prone on the ground in sandbagged trench as they take cover from Communist mortar fire.

One of these men was one of our Chaplains, Rev. Ray Stubbe. He was everywhere there, on the base, and out in the hills around Khe Sanh where other Marine units were often in hand-to-hand combat with the NVA defending those hills. He is beloved by all of us who were there. He was always there for us, supporting us, listening to us, meeting our spiritual needs and caring for the wounded and being present to the dying. Listen to these men and watch the visuals and you will get a very intimate sense of what it was like to be at Khe Sanh during the siege and how it is still very close to all of us.

Though that experience is now 51 years in my past, at this time of the year my senses get a little sharper, I start having the occasional dreams and I start remembering again the sounds, the smells, and the red dust of that bleak place. It was tattooed into our memories. We will always remember those who we endured those days with, and those who fell there. Many of us keep in touch and see each other every year now at our Khe Sanh Veterans reunions.

We are brothers and our love for each other is a bond that time and age only strengthens. 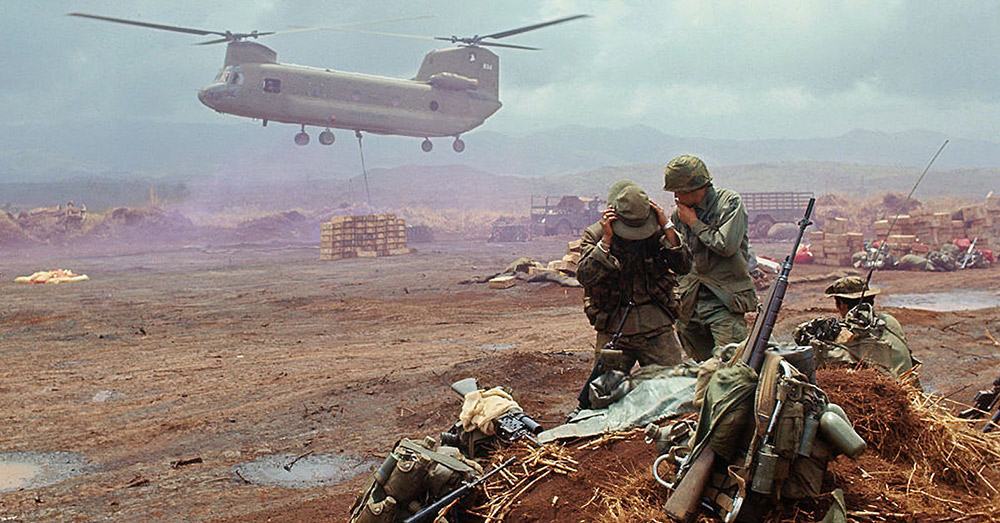 Ray Stubbe wrote a book about that time called, “Battalion of Kings: A Tribute to our Fallen Brothers who Died Because of the Battle of Khe Sanh, Vietnam.” It is an account of each day and of those who were wounded and those who fell. For Khe Sanh veterans it is our memorial, told with loving care and devotion by a man of true courage, who somehow made those who came in contact with him feel listened to and cared for with a love that stood out like a bright candle in the darkness and the intimate, present danger of that place.

To this day we say, without guile, that we love Ray Stubbe.

The Veterans Site sends its deepest thanks to all who endured the Battle of Khe Sanh. To those who fell there, we promise to never forget your sacrifices. We thank Rev. Ray Stubbe for what he did for the Marines and Corpsmen at Khe Sanh and in the surrounding hills during that time. You showed us all the true meaning of the Marine Corps motto, Semper Fidelis!