Did you know that the most famous service dog in the U.S. military started out as a stray? Or that he captured German soldiers all by himself? Those are just a couple of the amazing facts about Sgt. Stubby, the fighting dog of WWI and the only service dog to be promoted through combat! And this unexpected hero got his start thanks to a caring soldier who took the time to care for the stray dog.

In July of 1917, members of the 102nd Infantry, 26th Yankee Division were training at Yale University in New Haven, Connecticut. Watching the soldiers train was a stray dog, a terrier-mix with a short, stubby tail. Private J. Robert Conroy saw the stray dog and decided to take him in, caring for him at the barracks and naming him Stubby after his tail. Stubby was good-mannered, friendly, and obedient, and provided great amusement and distraction for the men as they were preparing to go off to fight in World War I.

Conroy and the rest of the 26th Division were set to ship out for Europe in October of 1917, but by that time, Conroy had become too attached to his dog to leave him behind. So had the rest of his unit. He was a morale booster for the troops, and more importantly, he was a beloved pet. The Army’s rules, however, strictly forbade him from bringing an animal with him. Conroy also knew that if he left Stubby behind, he would become a stray again with no one to take care of him. 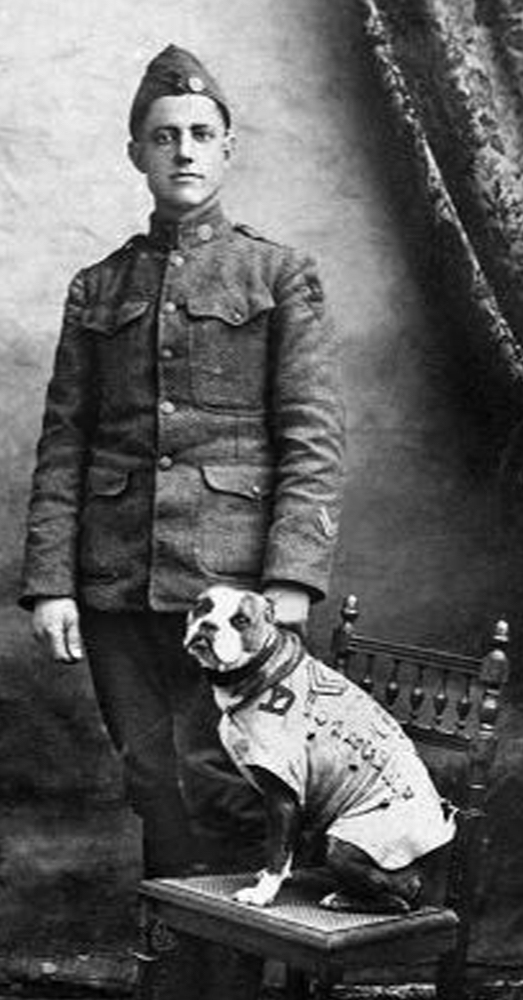 With the help of the other men, Conroy snuck Stubby onto the USS Minnesota that was to take them across the Atlantic to the war. For several days, they were able to keep the dog’s presence a secret from any of the officers. Then it happened. Conroy’s Commanding Officer found the two of them together and was immediately angry. Conroy pleaded his case to the officer and then pulled an ace out of his sleeve. While still at Yale, they had taught Stubby a special trick. Conroy gave the command “Present Arms!” and Stubby lifted his paw to his head in a salute.

That was enough to win over the officer. Not only was Conroy allowed to keep Stubby, but he was also made the official mascot of the unit and was to accompany them onto the battlefield. Of course, they all thought that Stubby would be just a mascot — something to boost morale and distract them from the misery of war — but the scrappy young dog would soon prove to be so much more.

The first time Stubby showed what he was really made of was on February 5, 1918. After being with Conroy and the other men in the trenches for some time, he followed his owner onto the battlefield at Chemin des Dames, France. Charging right along with the other soldiers, Stubby became a fighting military dog. Over the next 18 months, he would quickly develop useful skills, get wounded, save lives, and even capture enemies. 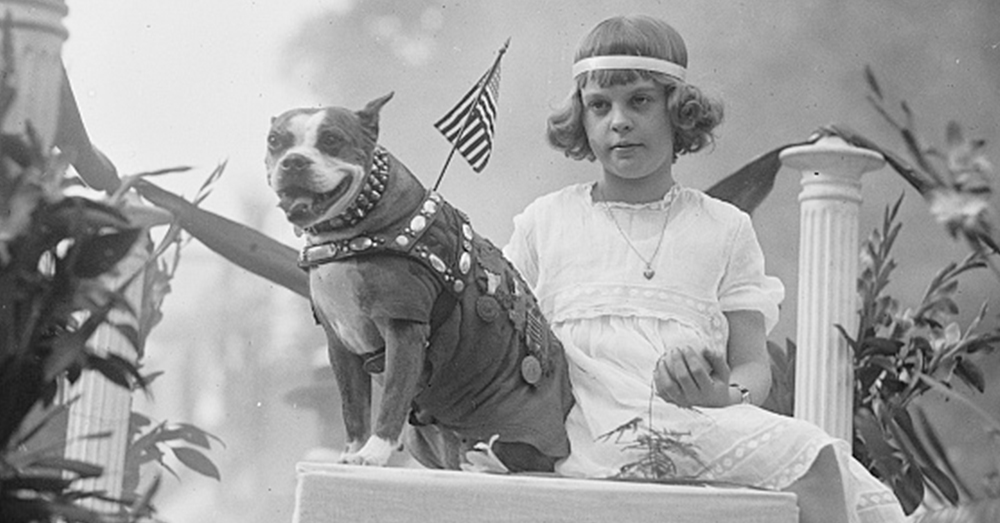 Photo: Library of Congress Prints and Photographs Division Washington — Sgt. Stubby in a parade after the war.

Stubby was first wounded by poison gas during an attack. As he recovered from that, it became clear that Stubby’s already keen canine smell was now more tuned to the gas. He could smell it before it would reach the men and he would bark to alert them of the coming poison. Early one morning while the soldiers were still sleeping, the Germans launched a gas attack, but Stubby smelled it first and woke the men to put on their gas masks. He received his second wound stripe at Schieprey, where retreating German soldiers started throwing hand grenades behind them. His front leg and chest were injured by shrapnel, and he was sent to the rear to heal.

His hearing was also a lifesaver, as he could hear the whistle of artillery shells before it was audible to human ears. Again, he would bark in the trenches when he heard incoming artillery, giving the soldiers early warning to move or cover. There was no surprising the 26th Division or taking them off guard while Stubby was around. His bravery was also shown in his willingness and ability to go into No Man’s Land — the desolate, bombed, bullet-strewn area between opposing trenches — to find and rescue wounded soldiers. Stubby would find the wounded and then bark for a medic to arrive. He also helped lost soldiers get safely back to the trenches.

Continue reading Sgt. Stubby’s amazing story on the next page!