When The Chinese Closed In On His Men, This Medic ‘Snapped’ And Took Them All Out On His Own

War has often been described as long periods of boredom broken by sudden eruptions of deadly chaos and the need for instantaneous responses. There is no greater example of this than the story that you are about to read concerning Army Medic and Korean War veteran, Sergeant David Bleak.

Sgt. Bleak was an Army medic serving in Korea with 2nd Bn., 223rd Infantry Regiment, 40th Infantry Division. In Korea his unit was assigned to a mountainous terrain near an area called Minari-gol, which was near the 38th Parallel. In June of 1952 Bleak went out on a reconnaissance mission with 20 other soldiers from his unit.

Their mission was to probe the enemy lines and to capture a Chinese soldier for intelligence and interrogation purposes. 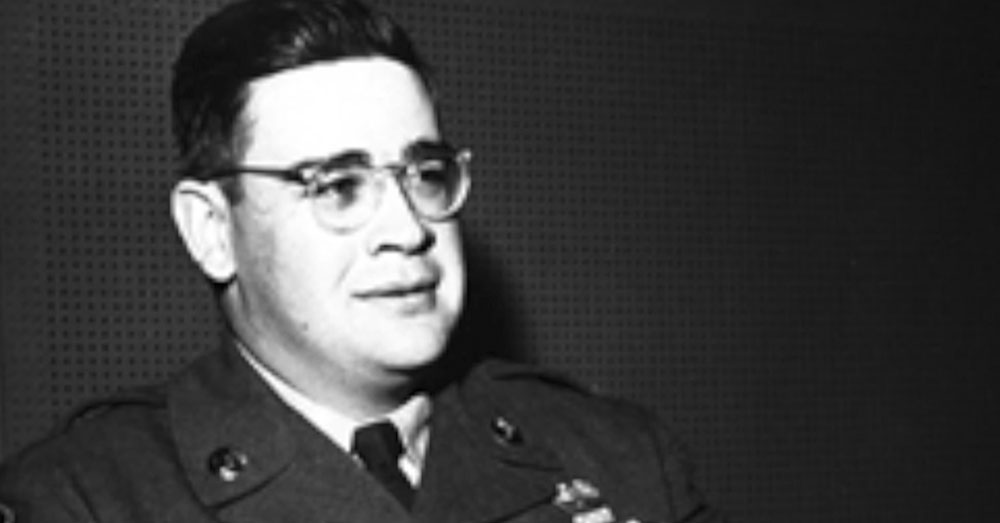 The patrol was operating pretty much in open ground with little concealment because it had mostly been blown away by previous fighting in the area. The patrol was on Hill 499 when they came under an ambush by small arms fire. Immediately, several of the recon patrol were hit and Bleak ran forward to care for each of them as they went down.

While his team members were able to suppress the ambush, Bleak took care of the wounded and they were all able to continue on with the mission. 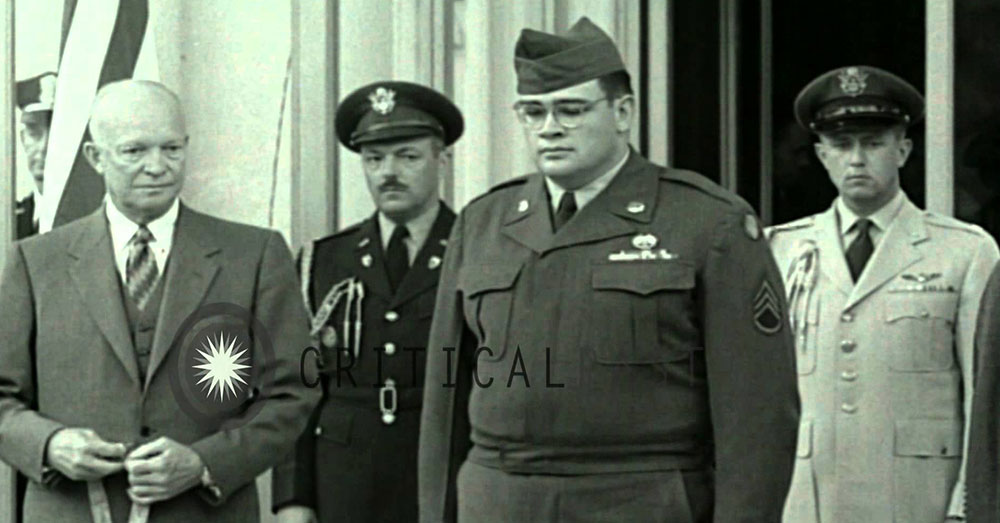 They were ambushed again by intense small arms fire coming at them from nearby Chinese communist trench line.

It was at this point that Bleak snapped.

He rushed at the enemy position with only his bare hands. As an Army medic, he was armed only with a knife and a .45 cal. pistol. He just reacted in defense of his men. He lept into the trench where the Chinese soldiers were firing from and immediately snapped the neck of the first one he got his hands on. A second Chinese soldier came at him and he grabbed the enemy soldier around the throat with his bare hands so hard that he crushed the man’s windpipe. A third Chinese soldier rushed toward him at that moment and Bleak pulled his combat knife and stuck it in the enemy’s chest. 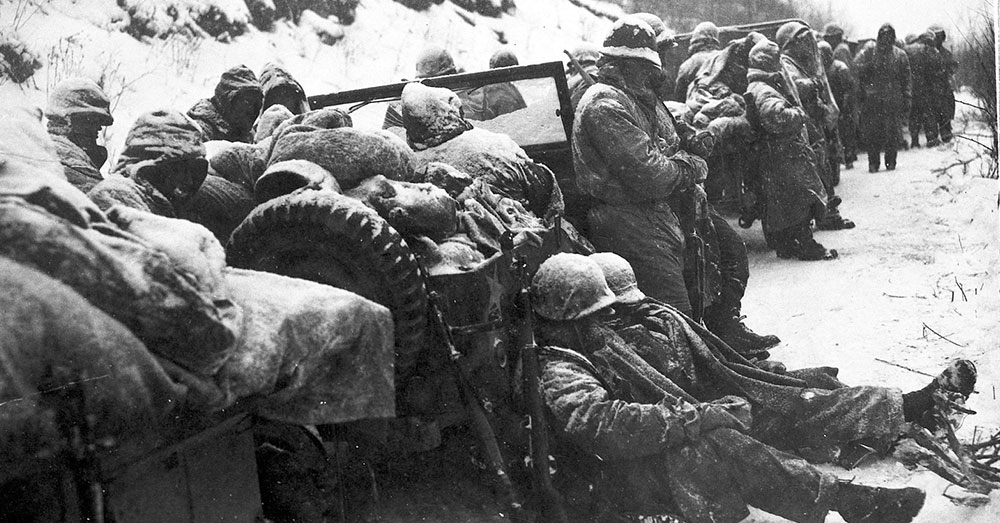 Source: Wikimedia Commons
Korean War Marines fought back fifteen miles through Chinese hordes, where they organized for the epic 40-mile fight down mountain trails to the sea.

Then, without hesitation, he returned to his men and treated those who had been wounded in that second ambush.

While he was working on one of those wounded men, a Chicom grenade bounced off of the helmet of one of his men who had been standing over him as he worked. Without hesitation again, Bleak pushed that man away and then covered the wounded soldier with his body to shield him from the shrapnel. The gods were with him here too. Amazingly, no one was hurt from the blast. 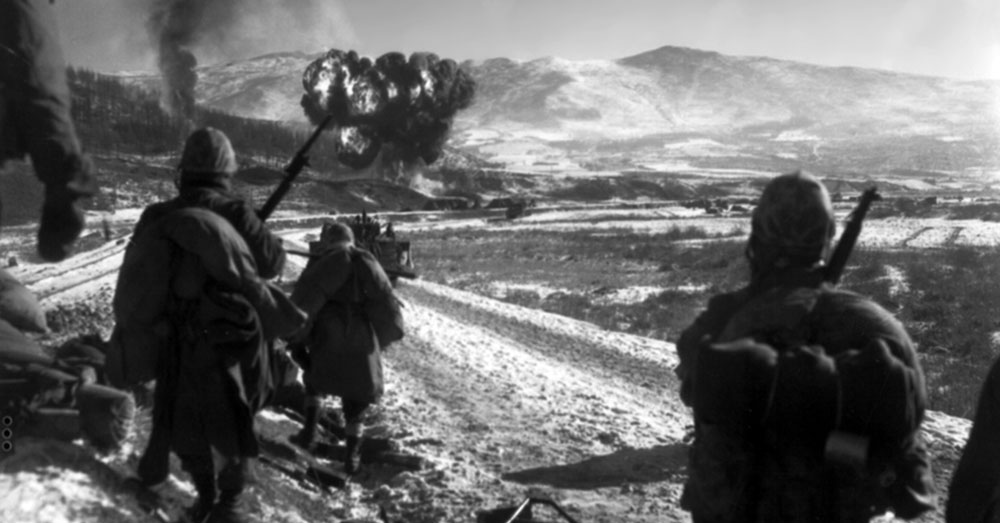 By this time the recon patrol had a captured soldier and they headed back to the U.N. lines. On their way back they were ambushed a third time. Three more of Bleak’s men were wounded in this attack. Bleak, himself, was wounded in the leg by small arms fire as he ran toward his injured men.

He was able to treat all of them and himself successfully and the patrol continued back to their lines. But, one of the newly wounded soldiers was too badly wounded to stand, so Bleak picked him up and began to carry him at the rear of the returning patrol. 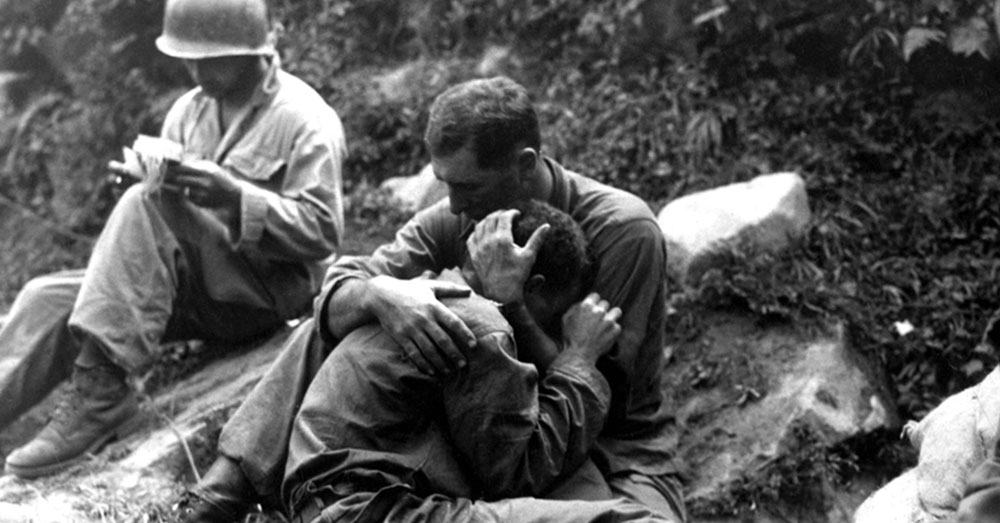 Unbelievably, it wasn’t over yet for Bleak. As he was carrying his badly wounded soldier, two Chinese communist soldiers came at him with fixed bayonets. Bleak apparently wasn’t having this. He quickly put his wounded soldier down and charged, barehanded, directly at the two attacking enemy soldiers. He somehow avoided their bayonet thrusts and smashed their heads together so hard with his bare hands that he crushed their skulls.

Bleak again picked up his wounded brother and made it back to the friendly lines.

Because of Bleak’s actions that day, both as a medic and as a soldier protecting his own, every one of the 20 men who went out on that patrol returned alive though a third of them were wounded.

A year after this battlefield event took place, Bleak was presented the Medal of Honor by President Dwight D. Eisenhower in a White House ceremony.

See Sgt. Bleak’s Medal of Honor ceremony in the video below.

Bleak would go on to live in Wyoming after the war and worked as a truck driver and a grocery store butcher and as a rancher. He moved to Idaho in 1966 and had a dairy farm for 10 years.He would work until he retired in the mid-90s with the Idaho National Engineering Laboratory.

He died on March 23, 2006 of emphysema and Parkinson’s Disease. Ironically, he died on the same day as another famous Army medic and Medal of Honor winner, Desmond Doss, the conscientious objector whose story was told in the 2016 movie, “Hacksaw Ridge’.

There is something in the heart and soul of a medic that drives them to be men and women for others. What Sgt. David Bleak did on that patrol in Korea in 1952 seems like something out of a movie about “The Hulk.” But those who have been in combat know that, in the midst of the chaos of battle, men are able to do things in defense of their brothers and sisters that seem in the usual sense of things, to be “outside the norm.”

Learn more about Sgt. Bleak in the video below.

Sgt. and medic Bleak did what he did for his men, without concern for himself. Bleak was a medic’s medic and a soldier’s soldier.

The Veterans Site honors the memory of this good medic and soldier, Sgt. David Bleak. We do not forget and we lift him up to you our readers so that you will remember this brave and dedicated man as well.