Ever Wonder What Really Happens On An American Aircraft Carrier?

This video will give you a sense of what everyday life is like onboard one of our U.S. Navy aircraft carriers, from the serious business of launching and landing aircraft to the fun of the traditions known by sailors everywhere as “Crossing the Line.”

While at sea, modern carriers have to meet the variety of needs of their sailors. The sailors on board have their daily duties covering every aspect of shipboard operations, from cooking for 6,000 sailors several times a day, to laundries, to maintaining the propulsion systems and managing the organized chaos on the flight deck.

They have shipboard doctors, nurses and corpsmen, even dentists. The onboard hospital operates much like a traditional hospital with a receiving/pre-op area with room for up to seven beds. It has two operating rooms, a three bed ICU, and a 23 bed recovery area. There are also up to as many as three dental wards where the dentist can do everything from regular cleanings to root canals. There is usually one surgeon, one anesthesiologist, a couple of surgical technicians, a critical care nurse and at least one or more Hospital Corpsmen when on deployment. There is also an internal medicine physician and a general medical officer to take care of the overall healthcare of the ships company.

The flight deck on an aircraft carrier is one of the most dangerous worksites anywhere. The sheer power of the catapults, jet engines and propellers is enough to demand a constant state of awareness. Things happen quickly on that deck. Every one has to know their jobs expertly. There is little room for error. Making even a small mistake, or even a moment’s lapse in attention can be disasterous. Yet, these young men and women carry out those duties with great professionalism. Their various actions are choreographed like a complex ballet. It has its rhythms and it precise movements, and when they are done right, it is a thing of true beauty and efficiency. And all of this is done as the huge ship rolls and rises over heaving waves and the in the winds that sweep across the deck when she is put into the wind to launch or to land aircraft.

This is serious business, but there is always room for fun, even here. There are workout facilities on board, with all the equipment you might find at a Gold’s Gym. A basketball court can be set up in the hangar deck surrounded by jets and other aircraft. They are also able to stay in touch with loved ones when necessary like at no other time in naval history, even at sea and on the other side of the world.

One of the Navy’s oldest traditions called, “Crossing The Line,” happens when the ship crosses the equator. When the line is crossed, all those aboard who are crossing it for the first time undergo a shipboard “hazing.” This tradition goes back centuries and involves a first timer’s transition from a slimy Pollywog to a trusty Shellback, which makes one a “son or daughter of Neptune. These events offer a fun break from the daily routines of the ship’s company. 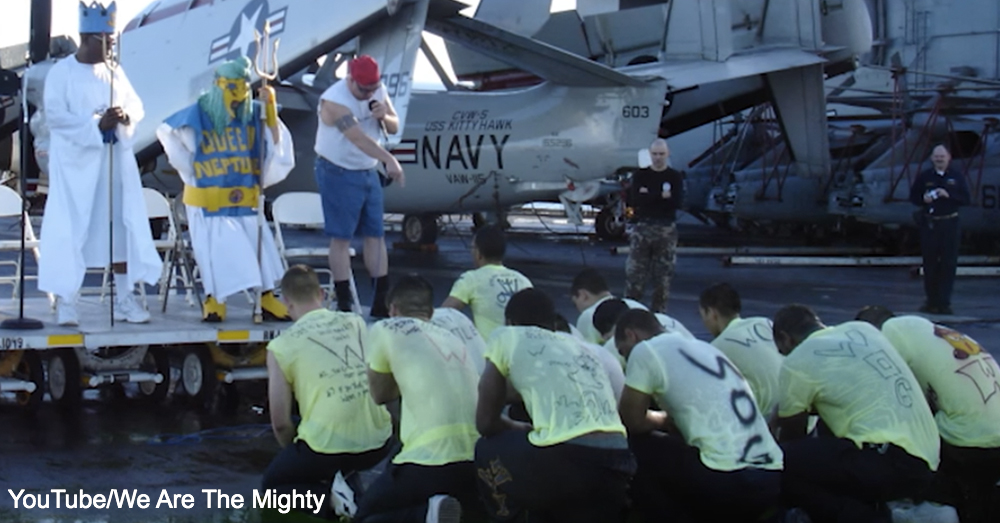 Young recruits are dedicated to the Mysteries of the Deep.

These mighty aircraft carriers of the United States Navy are true marvels of engineering and organization. They are capable of bringing swift and powerful force to every part of the world in war, or in peace. The sailors aboard these ships serve with distinction and skill. Everyone, from the Captain, to airdales, to snipes take great pride in their service aboard these incredible ships.

The Veterans Site expresses its respect and thanks to all who have served and all who are currently serving on one of our U.S. Navy carriers. Your skills and your commitment to keeping us safe are truly appreciated.