Not much is known about Serina Vine, the 91-year-old U.S. Navy, WWII veteran who died in the Department of Veterans Affairs Community Living Center in Washington, D.C. on May 21st of this year. She had been living there since 1995 when she had been found living in the streets of the nation’s capital, apparently showing signs of dementia. When she died, there was no family of record and only 4 people were going to attend her funeral. But Maj. Jaspen Boothe was not going to let that happen. 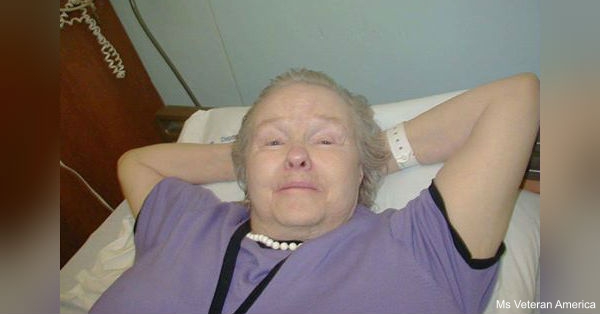 Maj. Boothe was one of the four people who were invited by retired Marine, William Jones, who works at the Quantico National Cemetery to attend Vine’s funeral, which was to take place on June 7, 2016. Boothe agreed to attend, but she was moved to do something more.

“In the military we don’t serve alone, therefore, we should not die alone,” she said.

Boothe took to social media, reaching out to all of the military and veteran organizations in the D.C. area. The response stunned her. She thought that maybe a handful of people would respond, but at the funeral that day early this month, hundreds showed up. Many active duty and reserve military showed up in their dress uniforms. Veterans came to pay their respects to a fellow veteran too. Not one of the attendees knew Serina Vine. All they knew was that she was a fellow veteran.

All of this happened by word-of-mouth and by something much deeper. Serena Vine was one of them. She served in the U.S. Navy from 1944 to 1946. They knew that she had died apparently without family, that she had lived in the VA Community Living Center for the last 21 years of her life. There really wasn’t much else that even the staff at the Living Center knew about her. They knew she spoke three different languages, that she loved to dance, and that she loved going to church every Sunday. It was not the details of her life that brought active duty, reserve military, and veteran service members to the funeral at Quantico National Cemetery. It was the brotherhood and sisterhood that moved them all to be there for her. She had served. They could not let her die alone.

This sense of brotherhood and sisterhood is a real part of the military and veteran communities. We experience it whenever we get together. It is a bond that transcends all the accidental differences that so often causes such consternation and tension in the rest of society. As Maj. Boothe so accurately stated, when we served, we did not serve alone. That bond remains with us for the rest of our lives. It is that bond that brought the military and veteran community out to the sunny, sacred grounds of Quantico National Cemetery recently. They were there to stand with and to honor a fellow veteran. They could not stand by and let Vines be put to rest alone.

The Veterans Site wishes to say thank you to the military personnel and veterans who chose to attend Serina Vines’ funeral.

We wish her Godspeed. May she rest in peace.