Here’s Proof The Sea Bees Live Up To Their Motto: ‘Can Do! We Build, We Fight!’

Ever since WWII, the Seabees have been an integral and extremely important part of the United States Navy. They were established after Pearl Harbor during WWII and remain one of the most versatile assets in the Navy’s arsenal.

The Naval Construction Battalions, otherwise known as the Seabees are unique to the Navy as they are essentially a land based unit. Their job is to provide all the building skills that go into building everything from airfields to military complexes that include housing, hospital facilities and anything else that is needed in forward military areas.
And they do it all quickly and with professional skill. 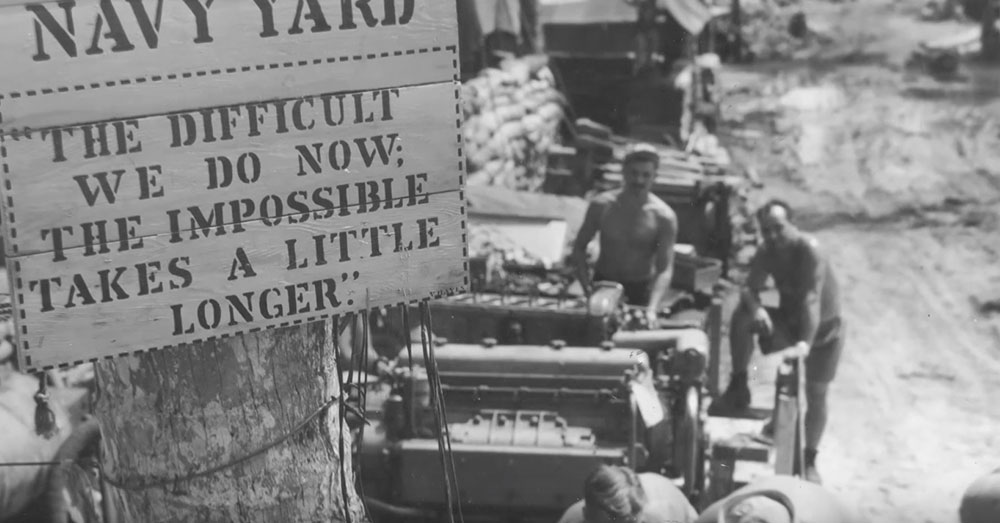 Source: YouTube/U.S. Navy
The Naval Construction Battalions, otherwise known as the Seabees are unique to the Navy as they are essentially a land based unit.

There is a sign that appears in the middle of this video that was hand printed and hung up on a tree at some outpost in the island hopping campaigns in the Pacific during WWII that will give you a sense of the indomitable character and confidence of the usual CB, or Seabee Battalion. It reads: “The difficult we do now, the impossible takes a little longer.” That is another way of saying “Can Do,” which is one of their most well-known mottos.

There was a small unit of Seabees with us at Khe Sanh during the siege in 1968. They had built and were charged with maintaining the airstrip there. That was not an easy job, given the fact that it was constantly being hit with NVA artillery and mortars. Their compound was next ours on the Khe Sanh combat base, right near the airstrip. 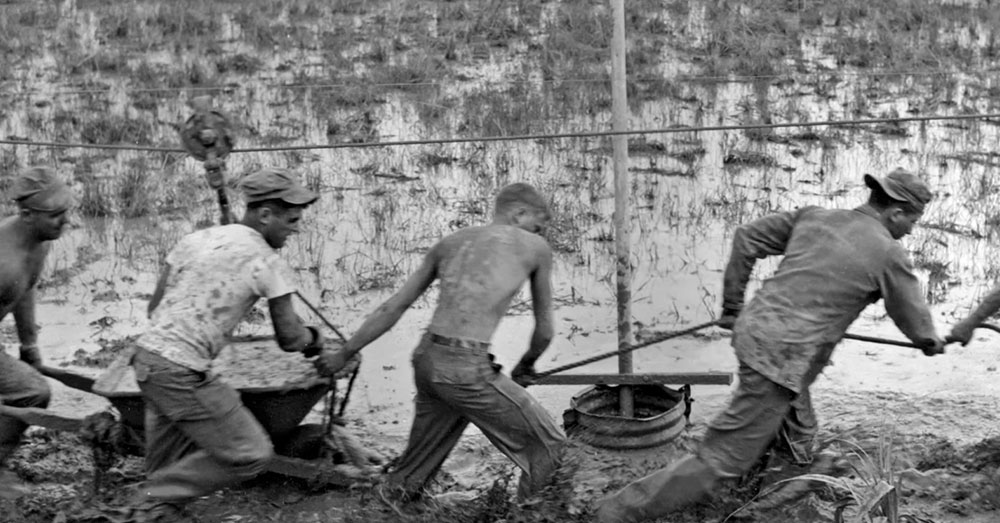 Source: YouTube/U.S. Navy
The job of the Sea Bees is to build everything from airfields to military complexes, including housing, hospital facilities and anything else that is needed in forward military areas.

It is not unusual for Marines and Seabees to be in near proximity with one another. They are both among the first in the fight. And that is an important thing to remember about the Navy Seabees.

Another of their mottos is: “We Build, We Fight!” They are trained in the arts of small arms combat as well as in the building arts. They have an illustrious history of courage under fire over the course of their history.

It is also a fact that the Navy Seabees are a profoundly valuable asset that can be brought to bear anywhere in the world, in a very short period of time, to help peoples and nations in their recovery efforts after they have suffered severe natural disasters. They have been real ambassadors of American skill, know-how and care on hundreds of occasions over their history. The Navy can deliver these Mobile Construction Battalions anywhere along with all of the necessary supplies to help people begin the rebuilding processes after those disasters. 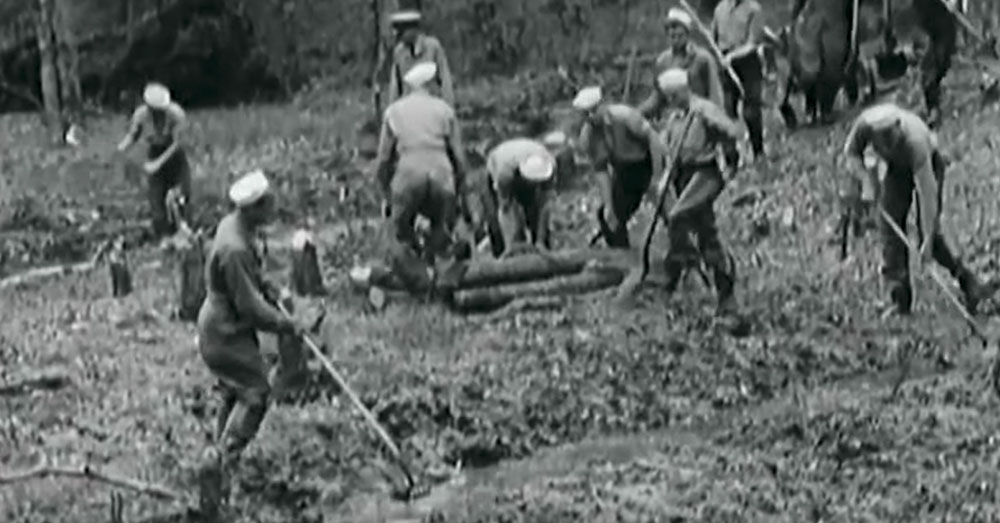 Source: YouTube/U.S. Navy
One of the mottos of the Sea Bees: “We Build, We Fight!”

The Seabees have one Medal of Honor recipient, Marvin G. Shields, a Construction Mechanic 3rd Class, who was killed in action at Dong Xoai, Vietnam in 1965 while serving with Navy Mobile Construction Battalion 11. This was a camp that housed U.S. Army Green Berets from the 5th Special Forces Group.

During an overwhelming attack by a regimental size Viet Cong force, Shields fought alongside his fellow Seabees and the Green Berets for over three hours and, though wounded twice, Shields continued to resupply his fellow Americans with ammo and other supplies and returned fierce fire of his own. At one point in the battle, he volunteered to go with the commander to take out an enemy machine gun that was devastating the camp. He carried a 3.5-inch rocket launcher. 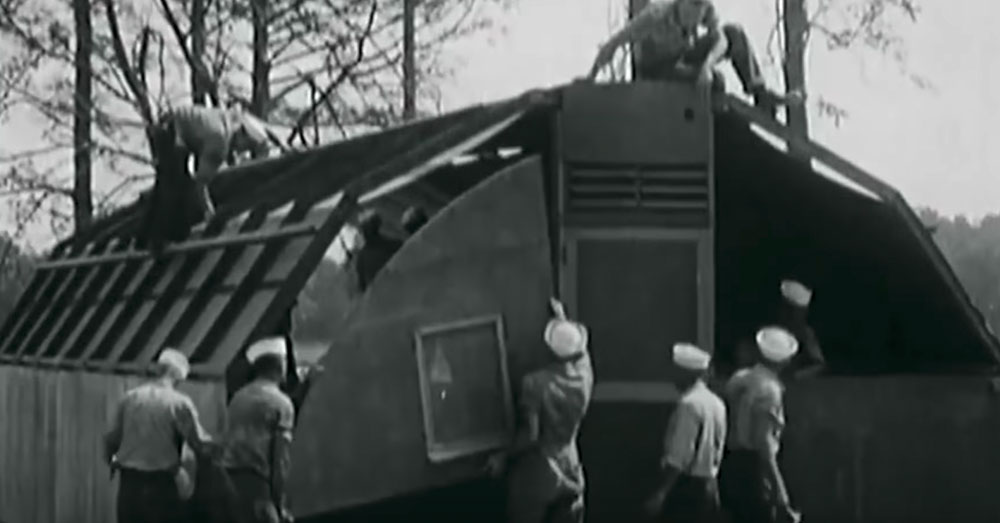 Source: YouTube/U.S. Navy
A number of Sea Bees have been recognized for extraordinary service.

They took out that machine gun, but Shields was later hit a third time by enemy fire and was mortally wounded. Shields demonstrated, in this action against a superior force, the fighting skill and determination of a good Seabee.

The Veterans site honors the history of the U.S. Navy Construction Battalions and all who have served and those who serve today in the Seabees. You are a most valuable and honored part of the Naval Service. You deserve the respect of all those you have served with in war and all those you have helped in times of peace.