A U.S. Navy surveillance aircraft was recently intercepted at close range by a Russian military jet as it flew over the Black Sea in what the State Department called a violation of “existing agreements and international law.” The whole incident was captured on film from the U.S. aircraft, and it’s shocking to see just how close the two got while in the air.

The incident was between a U.S. Navy EP-3E Aries II surveillance aircraft and a Russian Sukhoi Su-27 fighter jet. The United States, Russia, and NATO all operate closely in the region, leading to similar interactions in the past. This most recent interception of the Navy aircraft by the Russian fighter jet lasted just over two and a half hours above the Black Sea.

The Russian Defense Ministry said, “The crew of the fighter jet reported the identification of the American reconnaissance aircraft and accompanied it, preventing it from violating Russian airspace, observing all necessary security measures,” according to CNN.

However, the U.S. State Department disagreed. A statement from the Navy’s 6th Fleet said, “This interaction was determined to be unsafe due to the SU-27 closing to within five feet and crossing directly through the EP-3’s flight path, causing the EP-3 to fly through the SU-27’s jet wash.” 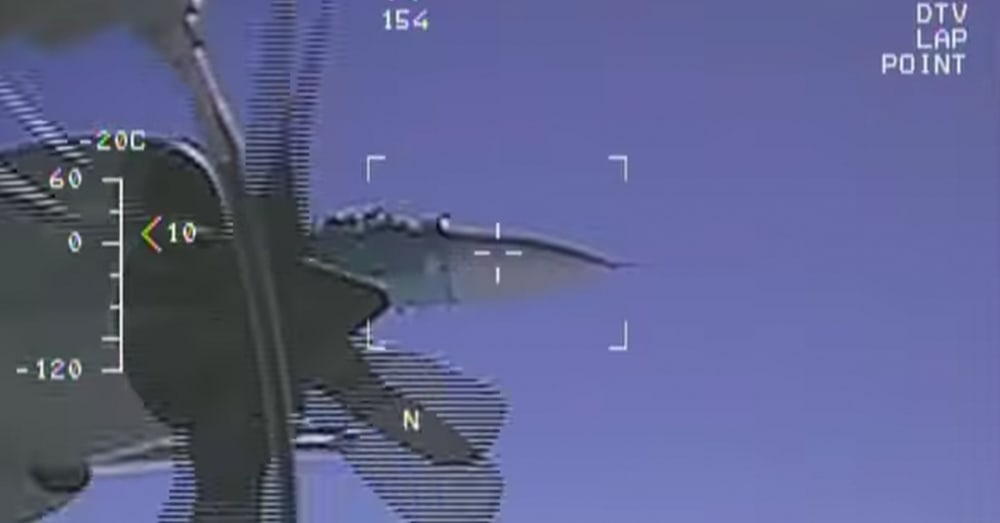 “This is but the latest example of Russian military activities disregarding international norms and agreements,” said State Department spokesperson Heather Nauert. “We call on Russia to cease these unsafe actions that increase the risk of miscalculation, danger to aircrew on both sides, and midair collisions.”

According to the 6th Fleet, the Russian fighter “executed a hard right-to-left turn from the U.S. EP-3’s right side with an excessive closure rate and came within five feet of the EP-3’s right wingtip. The Russian Su-27 then proceeded to enter the flight path of the U.S. Navy EP-3, crossing within 10 feet and executing a sharp dive below, which resulted in violent turbulence for the U.S. EP-3 and its crewmembers.”

Watch the up-close interception footage on the next page!