Recently, I ran across an article from the Washington Post written by Michael E. Ruane, that concerned a photograph taken during the siege at Khe Sanh.

The photographer who took it caught a single moment in time, a fragment of history.

The freeze frame of it caught a small group of Marines struggling to carry the body of a young 2nd Lieutenant who had just been killed in an ambush just outside the base with his platoon. It struck me right between the running lights when I opened it up because I had never seen it before, and because myself and others from my company were ordered to replace a unit of the 26th Marines on the perimeter wire defenses, while they were sent out on a patrol to try to recover the rest of the bodies of their brothers who had fallen during that ambush.

It is not an easy photo to look at. Though I did not know any of the men involved, they were brother Marines, and what had happened to them put a hurt into all of us.

You can see the anguish and the determination on the faces of those Marines who were bringing their young platoon commander out of the jungle desperately trying to get him and themselves back to the relative safety of the base. As is the nature of photography, that moment of terror and bravery and loss has been frozen in time. 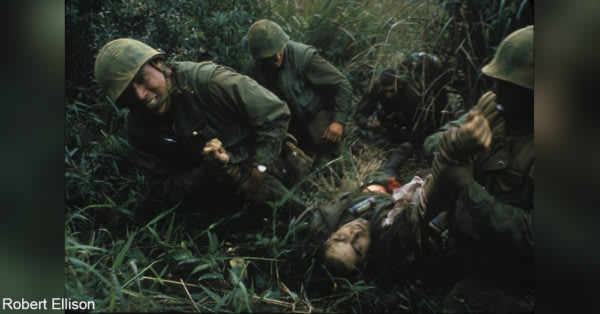 There are six men in the photo. The dominant color in the photo is green; a dark, thick green. It is the color of the jungle, and the color of the Marines uniforms, flack jackets and helmets. Their faces break the monotony of the green, but even they are only half seen in the shadows, or covered by a helmet.

The two Marines in the foreground are struggling to drag the body of their brother through the thick vegetation. The face of the fallen Marine, 2nd Lt. Donald Jacques, appears serene as if he were asleep. Other Marines are in the background emerging out of the green hell of bush and the sound and fury of the ambush. Though they are only mere feet in the background, the last two are almost completely concealed by the verdant wall of vegetation.

Twenty-four of those who went out on that patrol were killed in the ambush and Lt. Jacques’ body was the only one immediately recovered, according to the Washington Post.

Of the Marines caught in this picture we only have one name, that of the young, fallen, platoon commander, 2nd Lt. Jacques, who was being carried out of the ambush zone by his Marines. He was only 20 years old, and the other Marines are certainly no older. Yet, you can see their fierce will to bring their brother back. Lt. Jacques was from Rochester, N.Y. He had graduated from Basic Officer Training at Quantico Marine Base in Virginia only six months earlier. He had been one of the youngest to graduate in years.

As the Washington Post article points out, he and most of his classmates were serving “during the deadliest year of the war, 1968,” one of just 39 in his classs killed in Vietnam.

This photo tells more than just the reality that the Marines faced at Khe Sanh. The man who took this photo, Robert J. Ellison, was a 23-year-old freelance photographer who had been at Khe Sanh on assignment for Newsweek Magazine. Ellison took this photo, and many others he had shot at Khe Sanh, to Saigon shortly after it was taken. After filing them with Newsweek he, “bartered his way aboard a flight from Da Nang to Khe Sanh that was to bring in more Marines and equipment.” 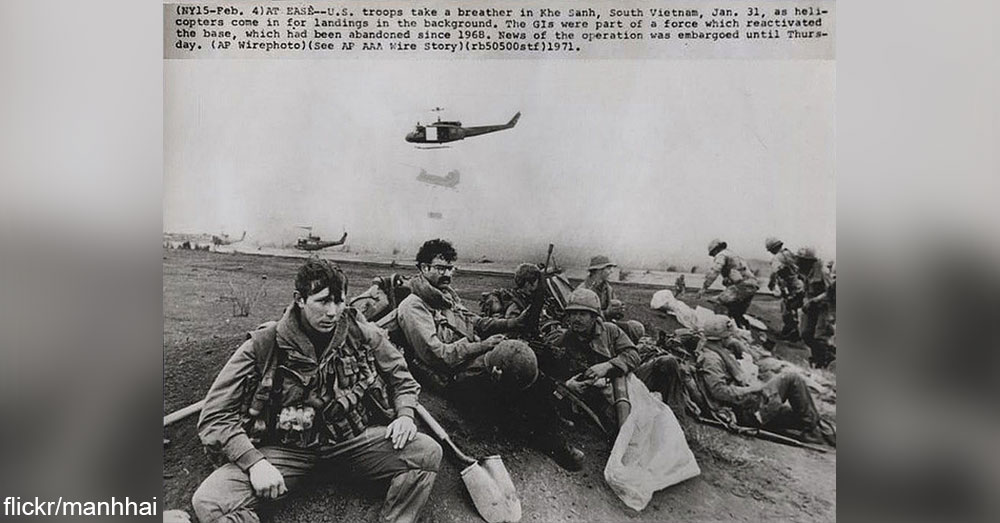 The east end of the airstrip at Khe Sanh extended right up to a deep drop off that fell sharply down to the Rao Quan river below. The NVA had set up heavy anti aircraft weapons down below and were often deadly accurate in hitting planes approaching for landings. This is one reason why most supplies were air dropped to the base.

The plane that Ellison had bartered his way onto to return to Khe Sanh was carrying both supplies and Marine replacements. As it approached the base for landing it was hit by the enemy anti-aircraft fire and went down. All 40 aboard were killed on that day, March 6, 1968. On March 18, Ellison’s photos and information about Lt. Jacques and his men were published in a Newsweek cover story titled, “The Agony of Khe Sanh.”

This photograph and its photographer were both a part of the story of the Vietnam War, and particularly about the battle for Khe Sanh. A 20-year-old Marine 2nd Lt. and a 23-year-old freelance photographer were both casualties of the war. As in all wars, the majority of those who fight and die are young men. Most are dimly aware, at some deep level, that they are serving an ideal, something larger than themselves. But in reality, they were simply fighting for each other.

As this picture shows, when all hell broke loose, those young Marines did what they could to help a fallen brother. Though they were still under fire and had been badly mauled by the enemy, these few remaining Marines were going to do everything that was required of them to get their brother back to the base.

Ellison, the young freelance photographer, was full of idealism as well. He was risking his life to tell the story. Though he may have been full of youthful bravado, like all of us were, he knew the immediacy of death’s threat and still took his chances to get the pictures that would help tell the story of what we were going through at Khe Sanh. These young men are part of the same story. We are humbled by their courage and deeply saddened by their suffering and loss.

The Veterans Site honors both 2nd Lt. Donald Jacques and freelance photographer, Robert J. Ellison. We honor all who have fallen in our wars. They must not be forgotten. We must remain “Semper Fidelis” to their memories.

Those who fell are the real heroes.