It was after a plane carrying an unknown virus crashed in the U.S. that the zombie uprising began, and the world found its fate resting in the hands of a few hungover veterans locked in the drunk tank. At least, that’s the fictional near future presented by director Ross Patterson in his new blood-soaked horror/comedy “Range 15.”

The film stars many actual veterans, including Marcus Luttrell, retired Navy SEAL and subject of the book, “Lone Survivor”; Leroy Petry and Clint Romesha, Medal of Honor recipients; Tim Kennedy, Army Green Beret and UFC MMA Fighter; and well known film stars William Shatner, Sean Astin, and Danny Trejo. Patterson, Nick Palmisciano, and Billy Jay wrote the film, which cost around $1.8 million, $.1.1 million of which was raised from over 10,500 donors through a crowd-funding campaign that simply pledged to “blow some s–t up, and make the best military movie ever.” 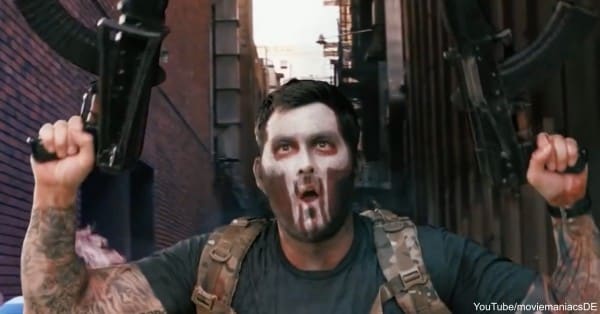 When the “Range 15” trailer first appeared on YouTube, it tallied over 2.5 million views in less than a day and a half.

“We’ve had a lot of offers for this movie,” Palmisciano told MovieMaker, “but there were a lot of things we would have had to change, and that’s not really what we wanted to do. We blanched at the idea of going against the system this whole time and then selling out at the end.”

The film debuted in May at the GI Film Festival, winning the GI Choice Film Award, and opened in 350 theaters around the country on June 15.

Patterson worked with clothing companies Article 15 and Ranger Up in producing the film. With Ranger Up CEO and former Army officer Palmisciano, the film crew was able to portray military veterans in a light that was both realistic and empowering.

“We decided to do this film for one reason and one reason only,” Palmisciano told MovieMaker. “This movie is for the veteran community. It’s not for anyone else if they don’t want it to be. I hope that it becomes a big hit; I hope it makes a lot of people smile, and I hope it does a lot to bridge the veteran-civilian divide. But if it doesn’t, and the only thing that happens is our veteran community has a movie that they love, then we have succeeded.”

While “Range 15” horrifies with comic brutality, we can’t forget those veterans who aren’t in starring roles, but face just as great a challenge as they struggle on the streets every day. A recent study conducted by the U.S. Department of Housing & Urban Development (HUD) and the Department of Veterans Affairs (VA) reports that on any given night there may be over 75,600 homeless veterans in shelters and on the streets across the country. Over the course of one year (October 2008-September 2009), 136,334 veterans spent at least one night in a shelter or transitional housing program, more than 5,000 of them alongside their families. Follow this link to find out how you can help.