This is one of those stories that touches all the emotional chords. It speaks to the better elements of our nature and the human capacity for empathy and mutual care. It is made even better by the fact that a simple, almost inconsequential event that happened 70 years ago would connect two generations of families who were affected by the terrible consequences of WWII.

Eligio Ramos is a WWII veteran. He is 91 years old now, but during that war he was a 20-year-old soldier. Serving with the U.S. Army’s 250th Artillery, Ramos was involved with liberating several German concentration camps toward the end of the war where so many millions of Jews and others had been sacrificed to the madness of Nazi hate and the indifference of too many others.

Though those events took place seven decades ago, Ramos still remembers the concentration camp prisoners coming out of the camp gates and their buildings, so emaciated and weak that many fell into their liberator’s arms and died. But many were freed and were able to live out their lives because of the tough, war weary, hardened troops in units like Ramos’. 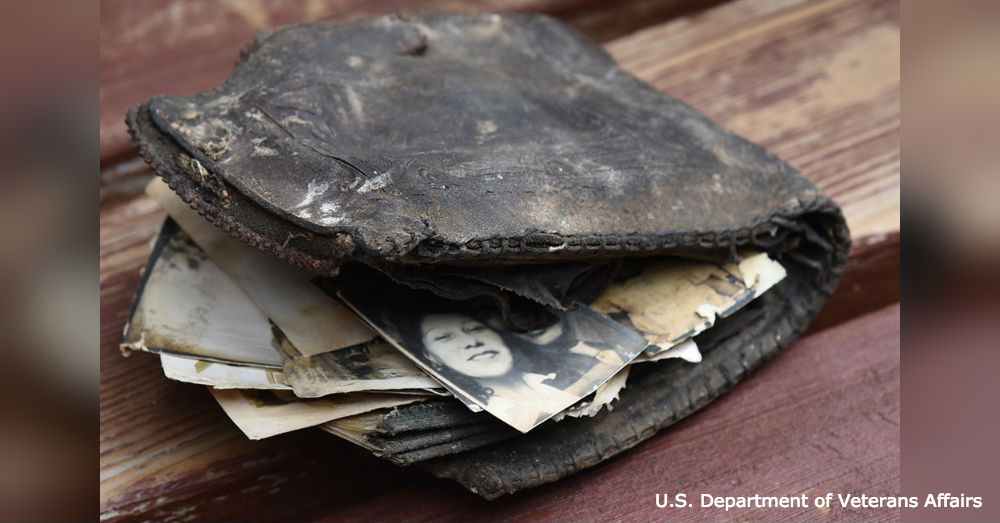 But Ramos, like so many others, had pushed those memories far into the recesses of his mind over the years. His children never heard much about his wartime experience, except that he was with an artillery unit. They had a picture of him, and others in his platoon, standing next to an M119 Howitzer.

About 70 years ago, Ramos and his platoon were resting briefly from a long march in a farmhouse in the Austrian countryside. When they left he had not realized that his wallet had fallen from his pocket. And when he realized it was gone, there was nothing he could do about it, so he just forgot about it.

Recently, a letter had come to Ramos, bringing with it a glimpse of the past. Being of an age where things like strange letters are not so important, Ramos set the letter aside. It went unopened, that is, until his 72-year-old daughter was visiting him and going through some of the old veteran’s mail. She saw that one letter had very unusual stamps on it. She was about to pass over it, but decided to open it. And what a surprise it was, indeed.

The letter had come from a Dr. Josef Ruckhofer of Salzburg, Austria. The doctor’s family owned that farmhouse that the Americans had rested on that day 70 years ago.

Ruckhofer had been doing some renovation on the building. After removing some wooden planks from a wall, he found an old leather wallet at the bottom of the wall. He said, “It was a bit dirty but still okay.”

He opened it and found photos, stamps, papers, and Eligio Ramos’ military ID card with his birthdate, and his hometown, Harlington, TX. Ramos was drafted in 1942 from Harlington. This started an effort by Dr. Ruckhofer to try to find the person who had lost it, if that would even be possible. He would, after all, be pretty old, if he was even still alive.

It didn’t help, of course, that Ramos is a very common name in Texas. Or that Ramos no longer lived in Texas and had moved to California, and was now a resident of the VA’s Central California Health Care System in Fresno, CA.

Long story short, the wallet made it home, 70 years after it was lost by its exhausted, war-weary owner as he rested from the terrors and burdens of that war in an obscure farmhouse in Austria. The family, many of whom had only been little children back during WWII, gathered together at the VA facility around their beloved relative to celebrate the minor miracle of the old wallet’s return.

History has a way of entering into the present in unusual ways at times. This wallet is one of those unusual echoes that open a window to the past, that breaks through the cobwebs of memory to remind us who we are and what we have done.

Eligio Ramos was one of those that we call The Greatest Generation. He was not famous. After the war he came home and lived his life quietly, doing what was necessary for his family, contributing to society in his own small way. But he, along with so many other anonymous men who offered themselves in service of freedom during that war made a real difference in the lives of countless people by their service.

The return of Eligio Ramos’ wallet may be a small thing in the big picture of history, but it represents something great. It represents the fact that ordinary men acted in extraordinary ways for the good of others. Theirs was a selfless sacrifice, done mostly in anonymity. With the return of this wallet we are given another chance to reflect on that fact and to honor those like Eligio Ramos, who gave so much for the cause of freedom.

The Veterans Site thanks you, Eligio Ramos, for being brave enough and selfless enough to serve with so many of your brothers in that war that threatened the freedom of so many millions you would never know. We are humbled by the courage and the service of your generation. We will never forget.