One of the newest guided missile destroyers in the U.S. Navy is going to be named after a fallen Marine hero of the Iraq War. It will be called the USS Rafael Peralta (DDG 115). It will be full of the latest in naval warfare technologies and will take its place with the fleet after sea trials are completed. Every sailor who will sail aboard her will know the story of Sgt. Rafael Peralta and it is an inspiring story indeed.

Sgt. Peralta was deployed with the 1st Battalion, 3rd Marine Regiment to Iraq in 2004. He took part in the battle for Fallujah during Operation Phantom Fury. During a patrol in Fallujah, he had already cleared three houses. Entering another one, he was hit by multiple enemy rounds and was severely wounded. Even though he was critically injured, he dropped to the floor to clear the way for other Marines to engage the enemy inside the building. At that point a grenade bounced near him and his fellow Marines. 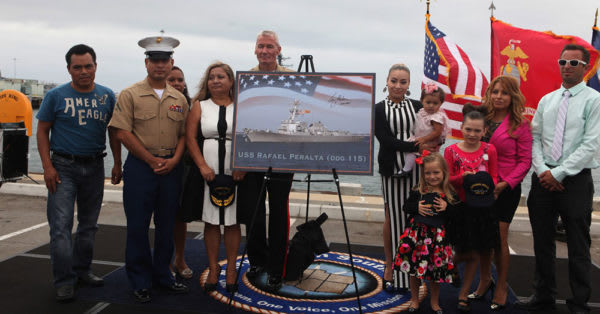 Peralta, without hesitation, pulled the grenade underneath his own body, allowing his body, his body armour and gear to absorb the explosive power of the grenade. He was killed immediately, but the lives of his brother Marines were saved. Peralta was recommended for the Medal of Honor by Lt. General Richard Natonski, the commander of the 1st Marine Division at that time. He based his recommendation in large part on the personal accounts of Peralta’s Marine brothers who were there. But it was announced later that he would receive the Navy Cross. There were some conflicting perspectives on whether Peralta was already dead when the grenade was thrown. New evidence has recently shown otherwise and he was deemed worthy of receiving the Medal of Honor. 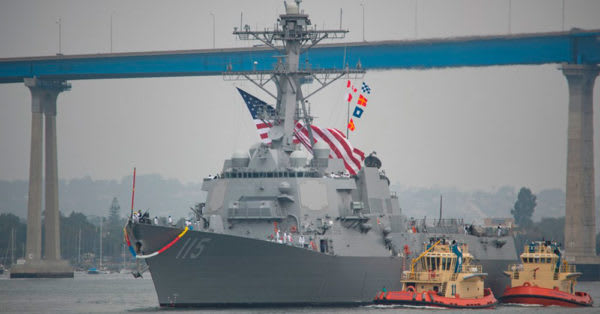 Peralta’s cause had a worthy ally in a fellow Marine, now congressman, Duncan Hunter. Hunter has been championing Peralta’s Medal of Honor for years. He introduced legislation on behalf of this matter in 2012 and in February of this year he filed a petition with Secretary of Defense, James Mattis. Congressman Hunter was able to cement Peralta’s legacy of service with the naming of this new destroyer. Peralta is the second Marine KIA during the Iraq War to have a ship named after him.

Peralta’s story is important for another reason as well. You see, Rafael Peralta was born in Mexico City, Mexico. He immigrated to the United States with his family as a child and graduated from high school in San Diego, California. He was awarded his green card in 2000. With that, he walked into a Marine Corps recruiting station and signed up. Apparently, according to, We are The Mighty website, this was no surprise to his family or friends. They say he was “fiercely patriotic” like his father before him. He posted his certificate of graduation from Marine Corps boot camp next to a copy of the Constitution and the Bill of Rights on his bedroom wall. Peralta loved his new country, but he also loved the Marine Corps and the Marines of his unit. This was evident in his actions on that day in Fallujah. His dedication to his country and to his fellow Marines made him willing to give his all for them. 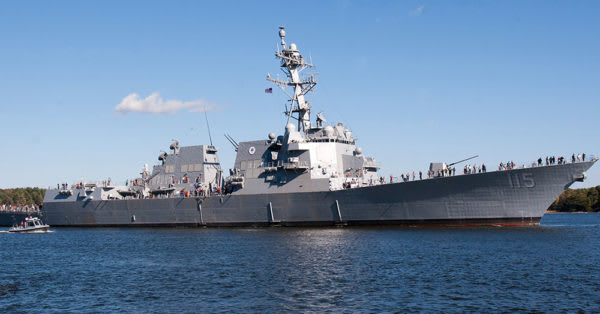 It is entirely appropriate and good that Sgt. Rafael Peralta’s memory will now go on in the exploits and duties of this new guided missile destroyer that is being commissioned with his name. By his actions, he is worthy of the nation’s highest award for valor. And the USS Rafael Peralta (DDG 115) honors the nobility of his character.

The Veterans Site wishes to add its honor and respect to the memory of Sgt. Rafael Peralta. We give him and his family our eternal thanks and we are humbled by his love of country and his fellow Marines. May the sailors of this fine new ship know his story and dedicate themselves to making her a noble and honored addition to the fleet.