Will We Place Progress Before Preservation of Sacred Ground?

This is a different kind of story. It is about history and how modern life is threatening the memory of that history. Both sides have their arguments in the matter, and both, if given proper consideration, have their merits. But for this writer, the argument comes down to the struggle that has become very evident in today’s cultural environment.

It is an example of the current argument at every level of society today, from the academic to the political, between the understood values of the what is commonly known as the Humanities (which includes disciplines like History, Literature, Social Studies, etc.) and those of Science, Technology, Engineering and Math, now known most commonly by the acronym, STEM.

This story concerns the Institute for Advanced Studies, one of the nation’s premier academic institutions devoted to science and technology, part of the Ivy League Princeton University campus in Princeton, New Jersey, and a coalition of historical preservationists including the Princeton Battlefield Society, the National Park Service, the National Trust for Historic Preservation, and the Civil War Trust. It is centered on the use of land that is part of one of the most important battlefields in American history. 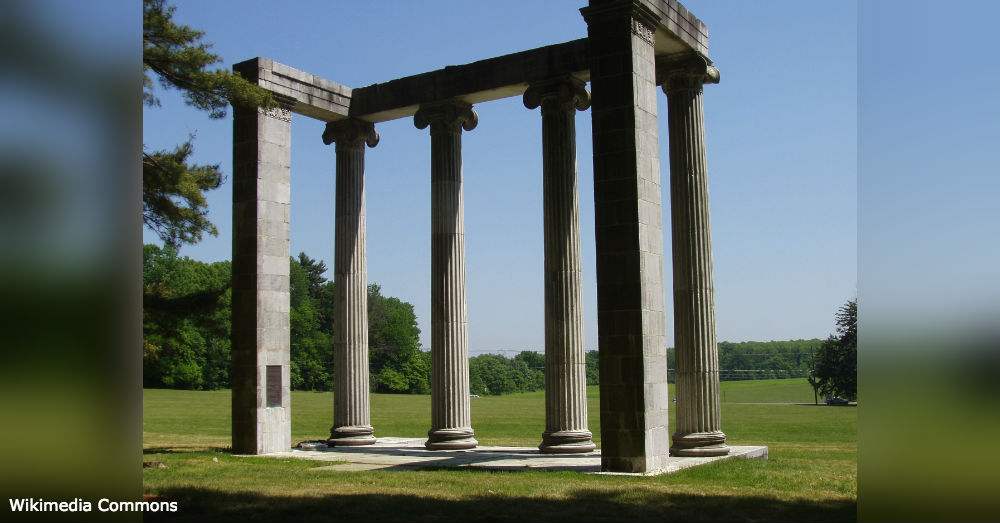 The Institute owns some 22 acres of land between its campus and the current Princeton Battlefield State Park in Princeton, NJ. It wants to build housing on seven acres of that land for current faculty, emeritus faculty, and international visiting scholars, to create a residential community of scholars, for the Institute that was founded by Albert Einstein.

It is clear at this time in our history that the STEM argument has gained a great deal of clout over the past few decades. Indeed, its success has in many ways diminished the value of the Humanities in the minds of many today. This is part of the concern in this argument.

The ground that is at the center of this struggle today is the very ground on which George Washington led his troops in their first decisive victory against British regulars in the Revolutionary War. At the time, the ground on which the Battle of Princeton took place was known as Maxwell’s Field. Washington and his troops had suffered several losses. The troops were demoralized and the revolution was on the verge of collapsing. This battle, fought on January 3, 1777, became the turning point in the Revolutionary War.

For the first time, the British were forced to realize that the Americans were capable of countering their supposed superiority. It is because of this fact alone that Maxwell’s Field ought to be preserved as hallowed ground. Its significance in our history as a nation is incalculable.

The problem, as I see it, is that the value of our history is no longer well known or even respected or honored in this day and age. Everything is valued today by its importance in the moment. Science and technology clearly rules today. Computers, and software capabilities change and advance with exponential speed. Technology governs almost every area of our lives today, from education to business, to medicine and space, even to the arts of war.

We have become habituated to the new, to the latest gadgets. History takes a back seat to all of this. The value of knowing history, especially the history of our own country, seems to have been shunted aside by the power, drive and immediacy of modern technology. The question is, How is this affecting our understanding of ourselves? 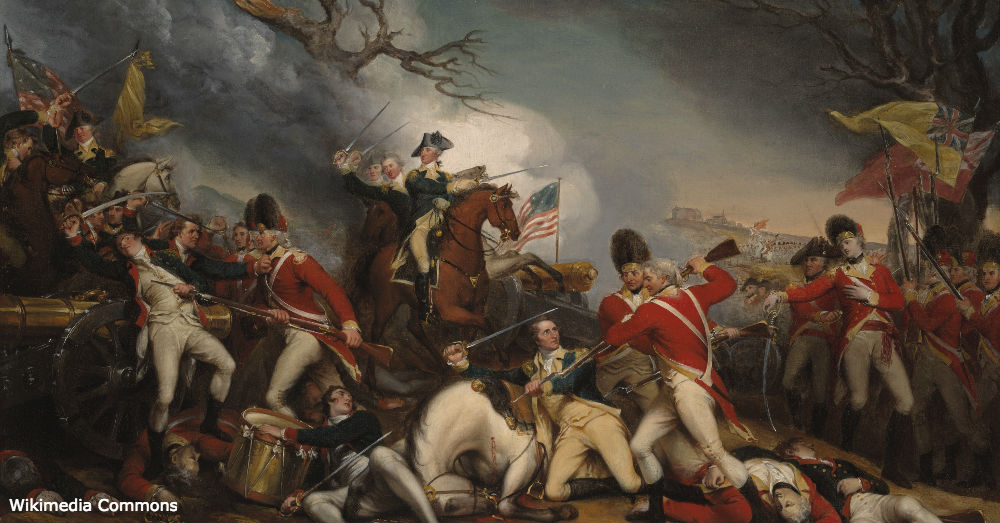 The Death of General Mercer at the Battle of Princeton, January 3, 1777 by John Trumbull.

To forget our history, or to never be taught that the past has direct value to us in the present, is a danger to our well being. To see only the negatives of the past and to then deny the knowledge of that as valuable is to refuse to learn from those mistakes. To deny the value of the good things of the past is a failure of curiosity. It is a denial of reality, of the facts that formed this nation, which has been the most important experiment in human freedom and democracy in human history.

The Battle of Princeton, fought that cold winter day on Maxwell’s Field outside of Princeton, ought to be preserved and promoted as one of the most significant historical sites in our land. It is as important as the battlefield at Gettysburg.

Sadly, according to Kip Cherry, Vice President of the Princeton Battlefield Society, in an article in the Philadelphia Inquirer, “Ninety-nine percent of the people in Princeton don’t realize this.” That is quite a statement. This is, in part, due to the fact that currently the State Park does nothing to tell the story of the battle. It is presently used mostly as a jogging and walking park. That is the fault of the state and of the city of Princeton. That most of the people who live in Princeton, NJ at this time do not know the significance of that battle in the founding of the nation, ought to be embarrassing.

Both sides in this argument have their validity. It seems that there ought to be some room for compromise, though that art seems to have gone the way of history in today’s environment too.

What is most important is that this history, indeed, this inexpressibly important historical site, ought to be preserved and promoted much more vigorously than it has been. It was on that hallowed ground that George Washington and his ragtag collection of farmers and civilian soldiers turned the tide of the Revolutionary War toward its ultimate victory. Without it, we would not have had the opportunity to become the free nation we are today. This ought not only be remembered with appropriate dignity and honor, its historical importance ought to be promoted and taught with the dignity and honor it deserves.

The yearning to be free that drove those revolutionary soldiers on that day, ought to be known well enough to give renewed life to our own yearnings to preserve that freedom today. 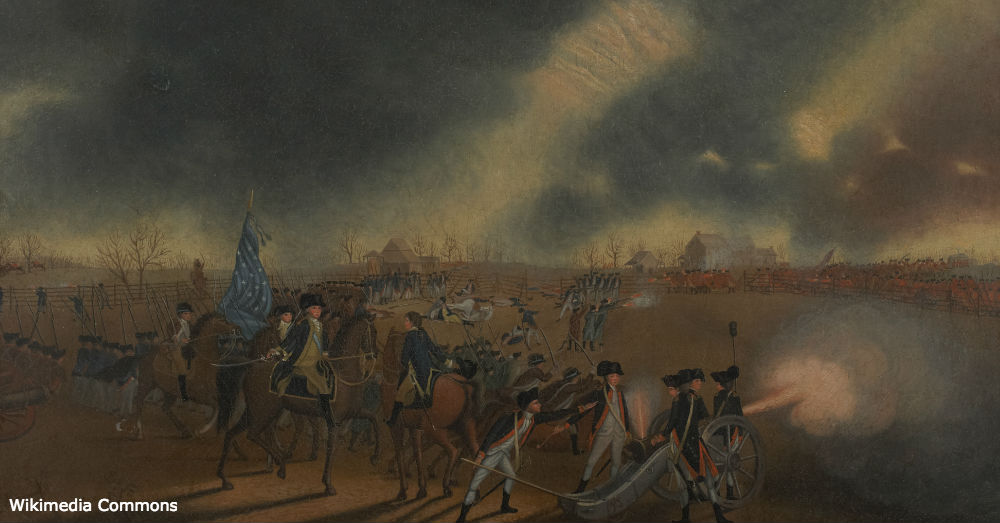 The Battle of Princeton by James Peale.

The Battle of Princeton reminds us of the value of the citizen soldier as well. From the founding of this nation to today, the citizen soldier has been called on many times to protect, to defend, and to continue this nation’s liberty. For over two hundred years it has been the citizen soldier that has fought the good fight, that has willingly and courageously made the sacrifices that were necessary to protect and defend the Constitution of the United States of America and to keep its people free and prosperous. This ought never to be forgotten.

It seems to this writer that the preservation of the Princeton Battlefield in Princeton, NJ is as important to the nation today as is the growing importance of science and technology today. There ought not be an argument between history and the present. They go hand in hand. The present is the direct result of the past. We ought to promote the value of studying, knowing, and honoring our past just as vigorously as we promote the expanding importance of today’s scientific and technological advances.

A people that refuses to learn and honor its past is a people that will inevitably lose its sense of self.