Polito “Paul” Olivas is a man made of some very tough stuff. He is no average guy in any sense of the word. He just turned 100 a couple of weeks ago, and to celebrate that august event, this centenarian jumped out of a plane at 14,000 feet.

The jump was covered by Stars and Stripes.

At 100 years of age, you would think that a man might be satisfied with just waking up in the morning and being able to sit up and take nourishment. But Olivas is not and, as you will soon see, has never been “average” or “typical” at any stage of his life.

He is a man of distinction in more ways than one. 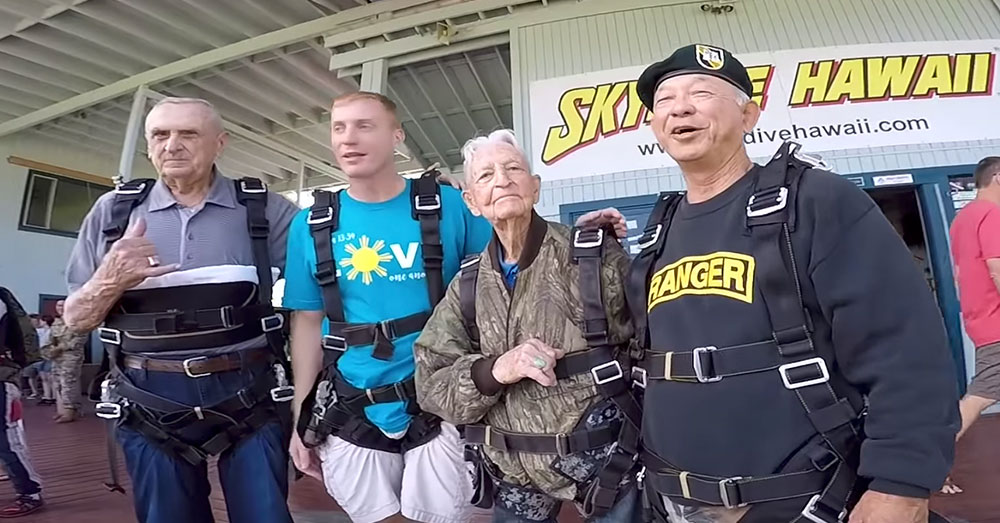 Olivas served a career in the Army and fought in WWII and in Korea. He served with the 101st Airborne Division during WWII and jumped into Normandy on D-Day, June 6, 1944. He would jump a second time into Holland during the ill-fated “Operation Market Garden” effort that was given the mission to take and secure nine bridges to open up avenues to continue the effort to drive German forces back into Germany. He would be with the 101st Airborne also at Bastogne during the Battle of the Bulge.

Those combat jumps were usually done at around 300 feet and were always static line jumps. Olivas told the Stars and Stripes reporter, “The closer you are to the ground, the less of a target you are.” 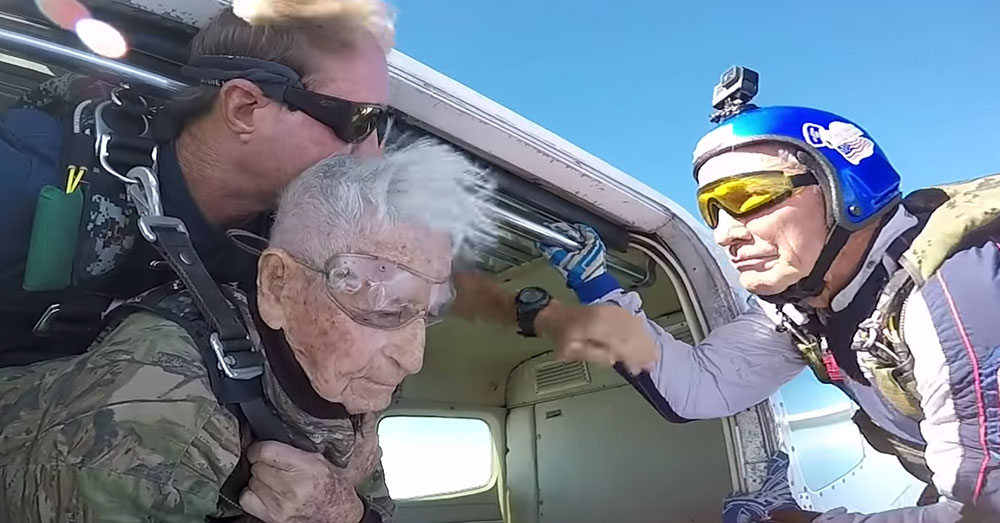 Source: YouTube/Star-Advertiser
100-year-old Olivas is ready to dive tandem for the first time in his life.

In reflecting back on what it was like to jump into those hot, combat conditions, with bullets hitting the airplane and whizzing past as you descended under your chute into the middle of a firefight, he remarked, “Fear turns into anger. Then, all you want to do is kill, like a mad dog. The adrenaline really works.”

Olivas fought with the 101st Airborne Division all the way into Germany.

He stayed in the Army and, when the Korean War broke out, he went to Korea in 1951 with the 187th Airborne Regimental Combat Team. In 1952 a new opportunity opened up, that is, the formation of the new 10th Special Forces Group, Airborne. Olivas jumped at that opportunity to join this new outfit, without hesitation. 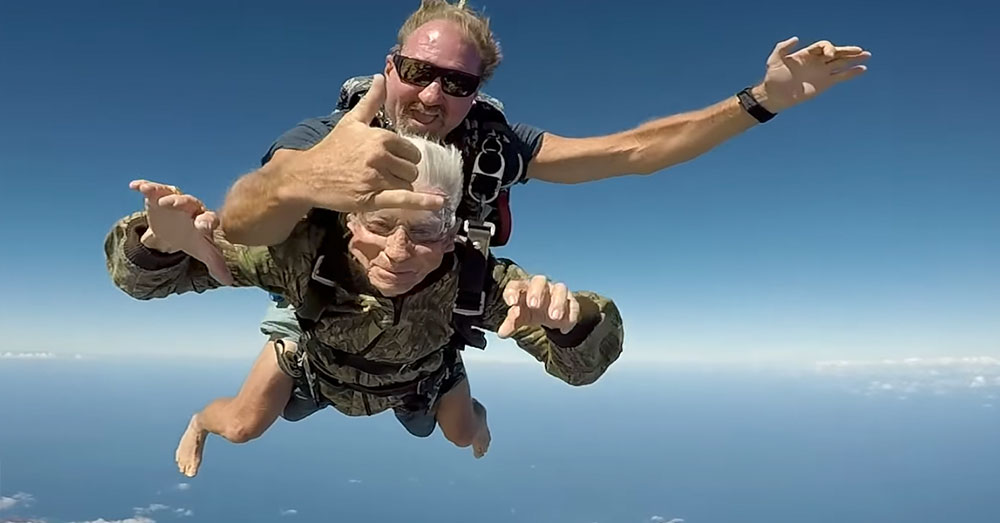 Source: YouTube/Star-Advertiser
The adrenaline rush during a skydive is like nothing else.

The troops in this unit started favoring wearing green berets, though they were not officially authorized at the time. This would eventually become a part of their official uniform and they became known as the Green Berets.

Olivas apparently settled into this new group with real excitement and commitment. He liked the toughness of the training and thrilled to the kinds of weapons and tactics they were trained to use in combat situations. 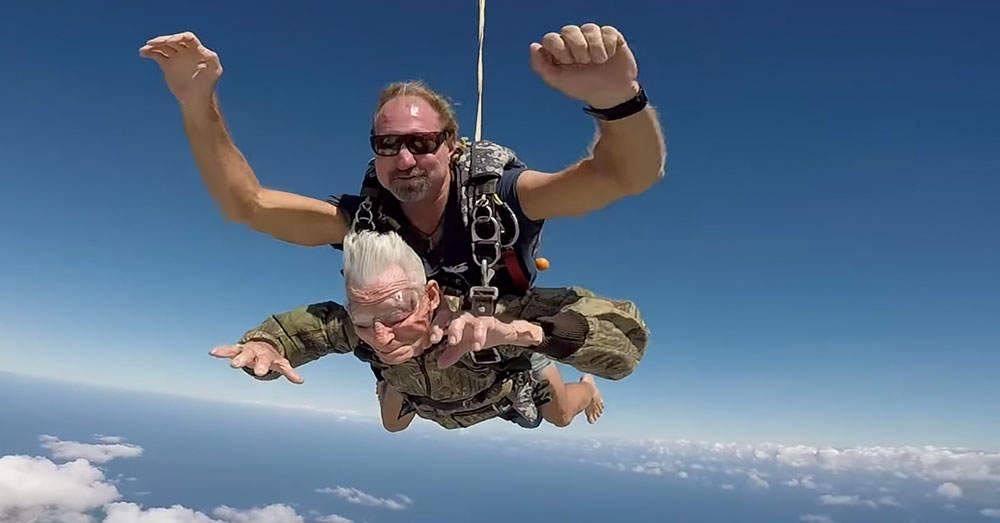 It is not an exaggeration to say that Olivas is made of unusually tough stuff. The fact of the matter is that at 100 he is still a man who loves the adrenaline of adventure. This is evidenced by the fact that he wanted to do a tandem skydiving jump recently, just one week after his 100th birthday. But it is also a fact that at 100 he is in great physical shape. He weighs 120 pounds, has no need for eyeglasses, and takes no medications. He is witty and quick of mind, and maybe just a little crazy, in that crazy way that we all knew as young men.

On this occasion, Olivas went to Skydive Hawaii on Oahu, which is at Dillingham Airfield. Those of you who have done this will remember that you are asked a lot of questions by the skydiving employees before they are willing to strap you up for a jump. They have to cover their bases for insurance after all. The young woman who was checking Olivas in asked him the usual questions like, “Do you have any medical conditions that would affect your ability to jump?” 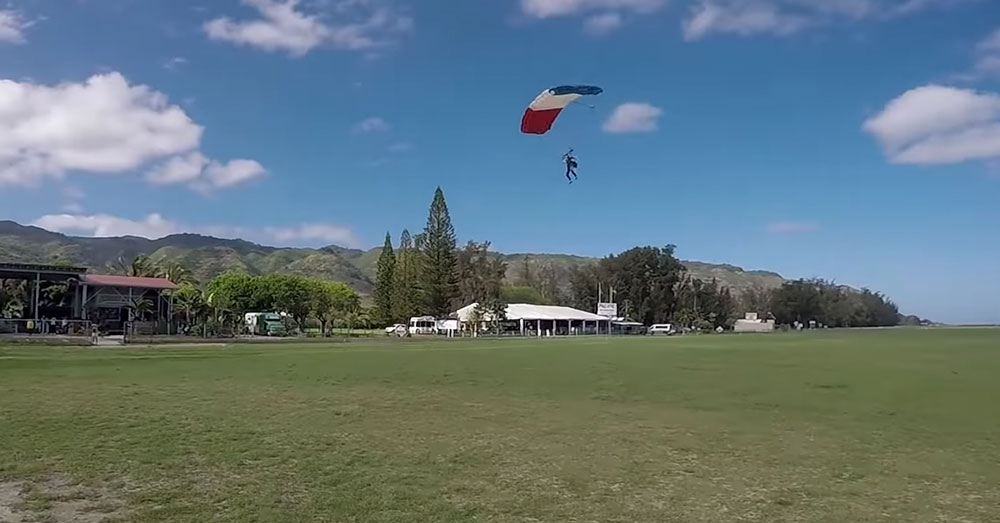 Source: YouTube/Star-Advertiser
Olivas and his tandem partner land without any issue.

Olivas’ impish personality is revealed in his response to that question. He answered jokingly, “Anxiety.”

He got through the details and was strapped into his harness and went aboard the jump plane with his partner for the jump, Richard Dopplemayer, and the plane climbed to an altitude that he had never jumped from before. He had never jumped in tandem, nor had he ever experienced the sensation of free fall before the chute opens.

He and Dopplemayer jumped. He experienced free fall for the first time, then felt the shock and pull of the chute when it caught air.

He was thrilled through it all. 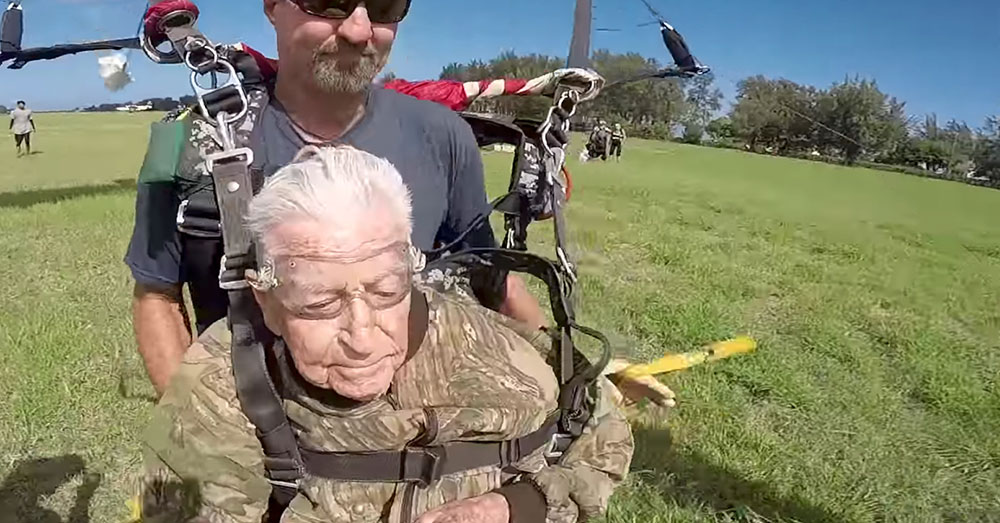 Source: YouTube/Star-Advertiser
Another successful jump in the books!

They landed back at Dillingham Airfield, softer and more controlled than he had ever landed before in those hundreds of low altitude, static line jumps he’d always done before.

If any of you have done this before (I have) you know what that thrill is like too. But I did it when I was 70. That is nothing in comparison to Olivas doing it on his 100th birthday. We should all be so lucky as to have the health and the attitude that this centenarian possesses in our own lives at any stage.

The Veterans Site sends its birthday greetings to Polito “Paul” Olivas on the occasion of his 100th birthday. We also send our complete respect for his honorable and committed service to our country in war and in peace. You are a great example of how to live life every day as if it is all a great adventure.

The motto of the Green Beret is, “De Oppresso Liber,” “To Free the Oppressed.” You have shown us how to live in that bold manner both in your youth and in your 100th year. We offer you our sincerest thanks.