It’s been nearly 40 years since President Lyndon B. Johnson tried to bring peace to the war in Vietnam. His initiative — despite his best intentions for both sides — would nevertheless be thrown off course.

As a recently-released trove of notes from aide H.R. Haldeman now show, it was Richard M. Nixon behind the ‘throwing.’

According to the New York Times, “Nixon directed his campaign’s efforts to scuttle the peace talks, which he feared could give his opponent, Vice President Hubert H. Humphrey, an edge in the 1968 election. On Oct. 22, 1968, he ordered Haldeman to ‘monkey wrench’ the initiative.”

Haldeman would use different channels to reach South Vietnamese president Nguyen Van Thieu to delay Johnson’s peace talks, despite the understanding that a deal was already forming. Among those entreated to play in Nixon’s scheme were his own secretary Rose Mary Woods, Chinese nationalist and Nixon fundraiser Anna Chennault, and even Taiwanese president Chiang Kai-shek. Yet Nixon would deny it all fervently — on television to David Frost, over the phone to President Johnson, and to the world.

“I did nothing to undercut them,” he told Frost in their recorded interview. “As far as Madame Chennault or any number of other people. I did not authorize them and I had no knowledge of any contact with the South Vietnamese at that point, urging them not to.”

But the candidate from California had plenty of motive in hiding his aims. As the BBC reports, President Johnson was well aware of Nixon’s “subterfuge” and placed the campaign under FBI surveillance in the months leading up to the election.

“We have found that our friend, the Republican nominee, our California friend, has been playing on the outskirts with our enemies and our friends both, he has been doing it through rather subterranean sources,” Johnson told Senator Richard Russell. “Mrs Chennault is warning the South Vietnamese not to get pulled into this Johnson move.”

The newly remodeled Nixon Library lauds the 37th president’s work in civil rights and foreign relations, but the cases against him for criminal acts are undeniable. It’s been four decades since Watergate, but the famous scandal — and its repercussions — are still known to many. The staggering death toll on both sides of the war, however, could be a result of Nixon’s actions in foiling peace talks in 1968.

The National Archive lists 58,220 American service members that were killed or later died from injuries sustained in the Vietnam War. The year with the greatest amount of casualties? 1968.

That very year, the Paris Peace Talks were planned to bring an end to a war that had already claimed the lives of 30,000 U.S. service members. A day before American voters chose between Nixon, Humphrey, and George Wallace, however, South Vietnam left the talks and waylaid the process.

Humphrey, aware of Nixon’s actions, chose not to use them against his opponent, feeling it too divisive an issue. Nixon, on the other hand, labeled the delay as an example of the Johnson administration’s ineffectiveness.

Nixon would win the election. 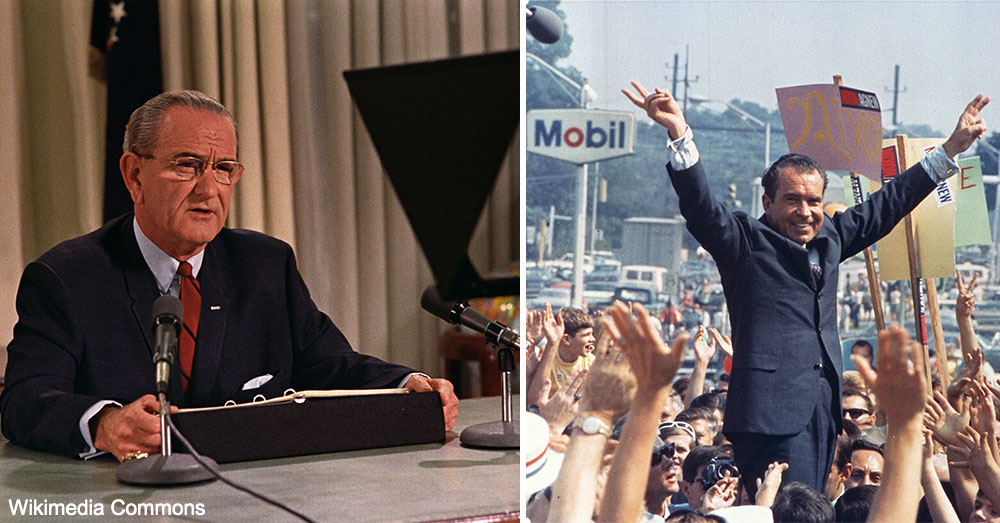 The Haldeman notes have actually been available from the Nixon presidential library since 2007, but only recently placed into context by John Farrell in the New York Times. And not everyone believes peace in Vietnam was actually sabotaged by Nixon in 1968. Jack Torry, at Real Clear Politics, explores the idea that peace was not as forthcoming as many were led to believe by Henry Kissinger and other advisors.

The search for truth will undeniably continue for Nixon’s historians and biographers.