The newest ship in the U.S. Navy’s arsenal doesn’t require anyone on board to complete its missions. That’s because it’s a drone ship. With the help of the Defense Advanced Research Projects Agency (DARPA), the Office of Naval Research completed development on the unmanned drone ship, called the Sea Hunter.

The drone ship is 130-feet long and built for hunting submarines, according to a press release from DARPA. It is designed to operate completely unmanned in all weather conditions, day or night, for months at a time. It can safely navigate thousands of miles of open sea, following navigation rules and avoiding collisions.

The practical use of an unmanned ship to seek out submarines or mines has immediately obvious benefits. If something were to go wrong while taking out a mine in the open sea, it would be a costly error, but that cost would only be monetary and not involve the lives of brave men and women.

The Sea Hunter, or Anti-Submarine Warfare Continuous Trail Unmanned Vessel (ACTUV) as it is officially called, isn’t joining the Navy fleet just yet, but it is one large step closer now. 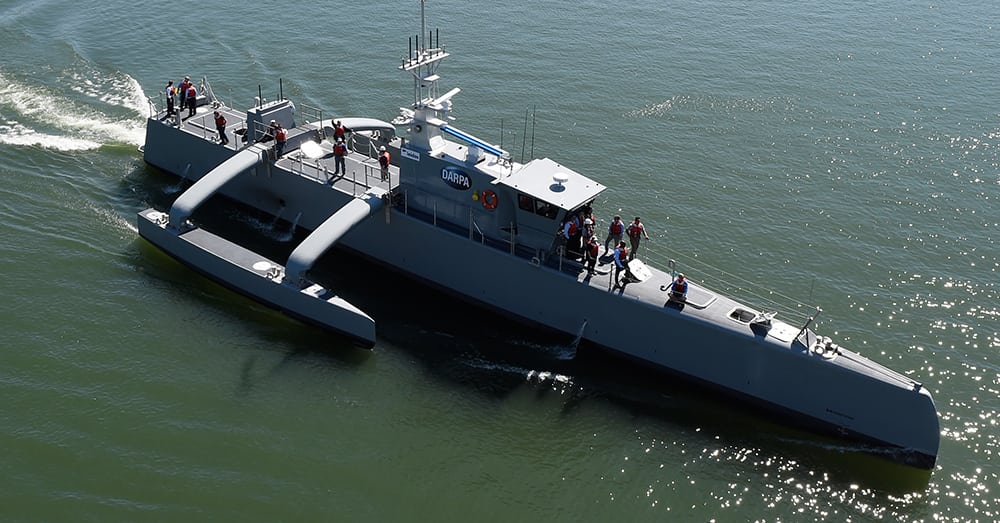 “Through at-sea testing on a surrogate vessel, ACTUV’s autonomy suite has proven capable of operating the ship in compliance with maritime laws and conventions for safe navigation — including International Regulations for Preventing Collisions at Sea, or COLREGS,” the DARPA release said. “ACTUV accomplishes this feat through advanced software and hardware that serve as automated lookouts, enabling the ship to operate safely near manned maritime vessels in all weather and traffic conditions, day or night.”

Check out this video of the Sea Hunter Drone!

DARPA turned over the Sea Hunter to the Office of Naval Research for further development and testing, with different ideas floating around on how the ship could be used — from detecting submarines and hunting mines to being a floating communications node. A second model has already been commissioned to be built as the Navy tests capabilities and options for use.

Check out another powerful new ship in the Navy’s fleet on the next page!