How Are Veterans Helping Provide Relief During The Recent Winter Tornadoes?

Natural disaster is sweeping across America, this time in the form of tornadoes. Starting on December 23rd, a series of violent storms blew through Mississippi and Texas. As of the writing of this article, the storm system has claimed 18 lives. And now the storm is said to have caused severe weather as far away as Illinois and Michigan! Meanwhile, as Mississippi waits for the President and FEMA to declare this a “natural disaster,” there is a group dedicated to providing relief: Team Rubicon, utilizing military strategy and experienced veterans to effectively combat the damage in the wake of the storm.

Team Rubicon deployed “Operation Skipping Christmas” on December 25th. The volunteers that make up Team Rubicon left their Christmas celebrations behind in order to help provide immediate relief to victims of the storms. It often takes FEMA and large government organizations a while to respond to natural disasters.

Team Rubicon ensures that victims of natural disasters have assistance right away.

The strength of Team Rubicon lies in their team members, many of whom are U.S. Military veterans. Team Rubicon recruits veterans because of their unique skills. In the military, troops are trained to react with precision during high-stress combat scenarios. Their ability to stay calm under pressure, as well as knowing how to provide strategic and tactical support, makes them a huge asset during natural disasters. 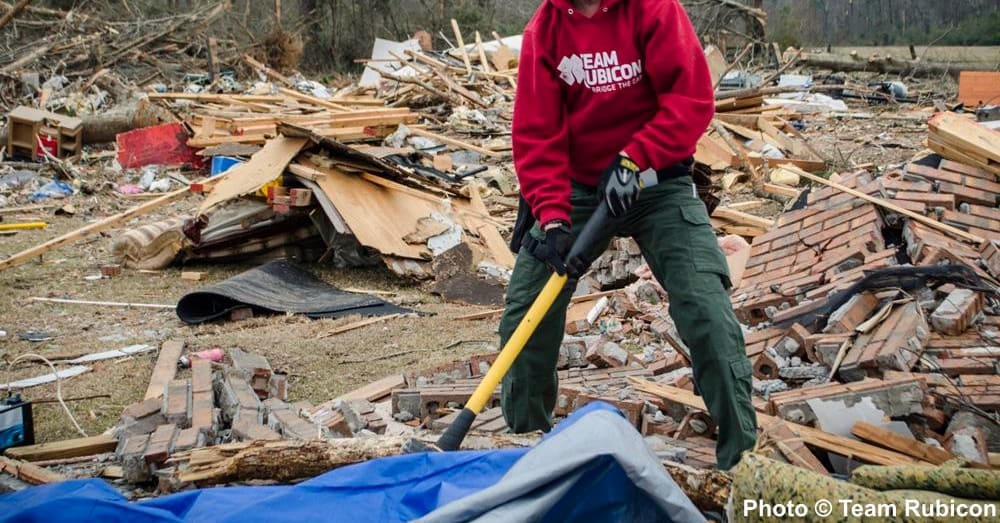 Veterans are able to lend their skills to Team Rubicon through the Clay Hunt Fellowship. This fellowship offers veterans a stipend and unique skills that they can apply to the civilian workforce. Through this fellowship, Team Rubicon is able to help veterans transition to the workforce after their military service. It gives vets a sense of purpose while they provide crucial support during natural disasters such as the storms that are currently ravaging our country.

After serving in the military, these brave men and women are serving their country yet again. You can make a donation to support them as they support those affected by the storms.

Team Rubicon needs support from us in their relief effort. Depending on the length of the operation, Team Rubicon will need to bring teams in to rest up the others. The Veterans Site is collecting donations to help aid Team Rubicon in their efforts to aid and rebuild the communities affected by these awful storms. Donations will help pay to keep the responders onsite as needed as well as purchase materials to assist in their relief efforts.

Will S. is a left-handed bibliophile who now owns a cherry-red Schwinn Traveler III. On summer afternoons you can almost see his vermilion shadow passing you at great speeds.
Whizzco