Iireland, a Belgian Malinois, served two tours in Iraq with her handler, Sgt. Joshua Sutherland, USMC, before she was adopted by Sutherland and his family. The brave bomb-sniffing military dog passed away recently at age 13, but she was given full military honors at a memorial service conducted at Camp Nelson National Cemetery in Kentucky.

The memorial service at Camp Nelson National Cemetery included a 21-gun salute, taps, a cannon fire, and the presentation of the flag. Several canine and military units attended and assisted in the memorial service for Iireland including the American Legion, the Camp Nelson Honor Guard, and the Marine Corps Military Police Company Alpha of Lexington, among others. For Sutherland, it was an emotional but proper goodbye to a fellow veteran and loved one.

“They deserve the same treatment as our brothers and sisters who fought over there,” said Shawnda Ebert, a chief petty officer in the U.S. Navy Reserve who helped arrange the memorial service – the first ever of its kind to take place at Camp Nelson National Cemetery. And while the memorial service was held there, the national cemetery does not currently allow military animals to be buried on the property, so she was buried at a family farm of Sutherland’s.

Sutherland echoed the sentiment by saying, “They [military dogs] deserve just as much as any man or woman out here. …All of our war dogs deserve the same honor.”

Iireland was a military dog from birth, coming from the Military Working Dog Breeding Program at Lackland Air Force Base. Originally a breeding dog, she was later put through training and became an explosive-detection dog for the Marines. She served two tours in Iraq in 2007 and 2009. Following the second tour, Sutherland, her handler, adopted her as the family dog where they lived first in Hawaii and then in Kentucky.

“The amount of people who came out, the love and support – it was more than we could have asked for. It was great,” Sutherland said after the service. 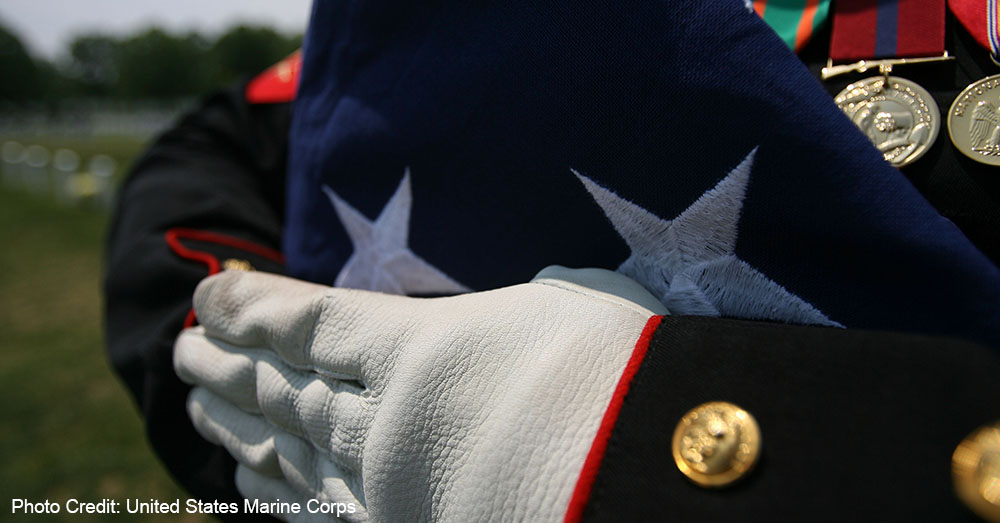 “The amount of people who came out, the love and support – it was more than we could have asked for.” – Sgt. Joshua Sutherland

Sutherland also spoke highly and fondly of Iireland, both during they deployment together and their family life afterwards. “There was no quit in that dog,” he said, adding that he always felt safe with Iireland doing her job and protecting himself and his fellow Marines. His happiest memories, however, come from the years they spent together with his family after he adopted her.

On losing her, Sutherland said, “It was the toughest loss that I’ve ever had to endure.”

Watch footage from the memorial service below: