These Military Sisters Root For Opposite Teams, But Their Family Has Been Fighting Together For Over A Century

This year’s annual Army Navy football contest for the Commander-In-Chief Trophy is over. Much to this “green side” Navy Corpsman’s dismay, Army came out on top in a 14-13 squeaker in heavy snow for their second win in a row.

It was a great game.

It is always inspiring at the end of each Army Navy game to see the tradition of both teams going to their respective stands and singing their respective school anthems. And may we all be reminded that this annual game is unique in all of football. 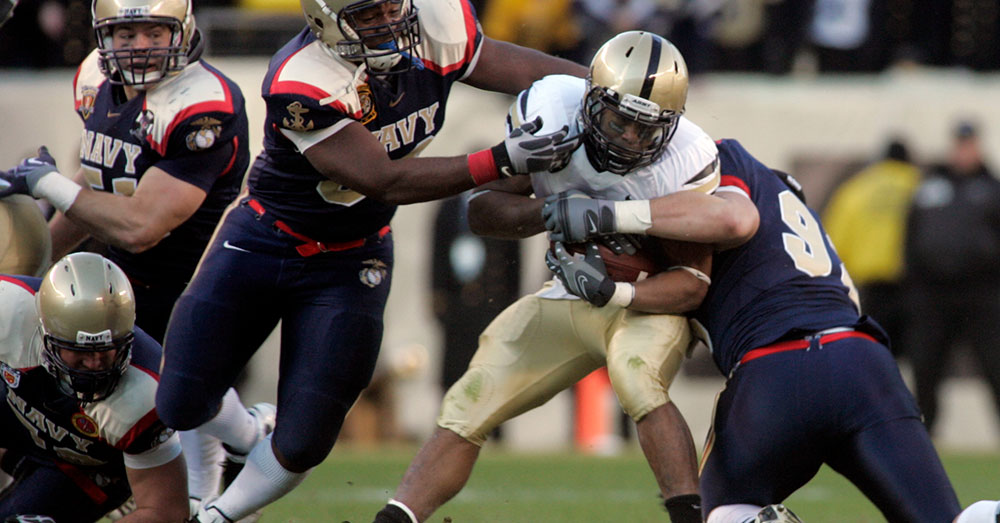 Unlike those who are praised as “heroes” for kneeling during the playing or singing of the National Anthem, or those who lift their voices in rancorous criticism of them, every man on both of these military academy teams is willing to put his life on the line to protect and defend all those watching them in the stands, or on their television screens, no matter their political stripe.

That said, there was another Army Navy game day story to tell this year as well. It is about three sisters, the Easter sisters: Madeleine, Adrienne, and Corinne. Their story tells us something about the quality and character of our military today. 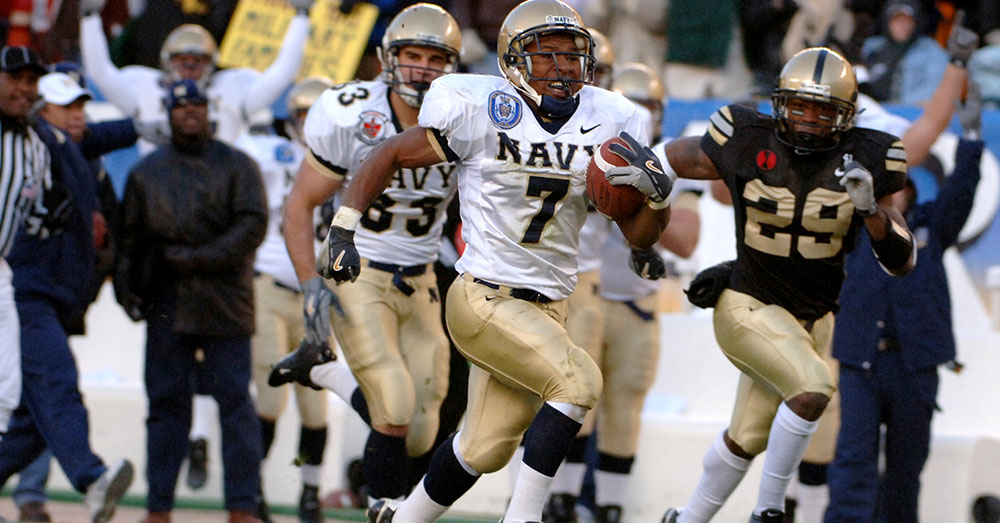 These three sisters come from a family with over 100 years (that’s four generations) of unbroken military service to this country, on both sides of the family. Their great-grandfather on the Easter side of the family fought in WWI. His son, Clovis Easter, was a Navy submariner in WWII and later an Air Force pilot who flew AC-130 gunships in Vietnam. Their maternal great-grandfather, William Pelfrey, served with the Army in the Philippines and China in the 1930s. His son, William Pelfrey II, fought three tours in Vietnam with the 7th Special Forces Group. He received a Silver Star for his part in discovering the secret tunnel systems at Cu Chi that the Viet Cong used throughout most of the war, and a Purple Heart.

Now, to the three sisters themselves. According to the Military Times, Madeleine is currently a sophomore at the United States Military Academy at West Point majoring in Spanish and Human Geography. She wants to be a Foreign Area Officer in the future. 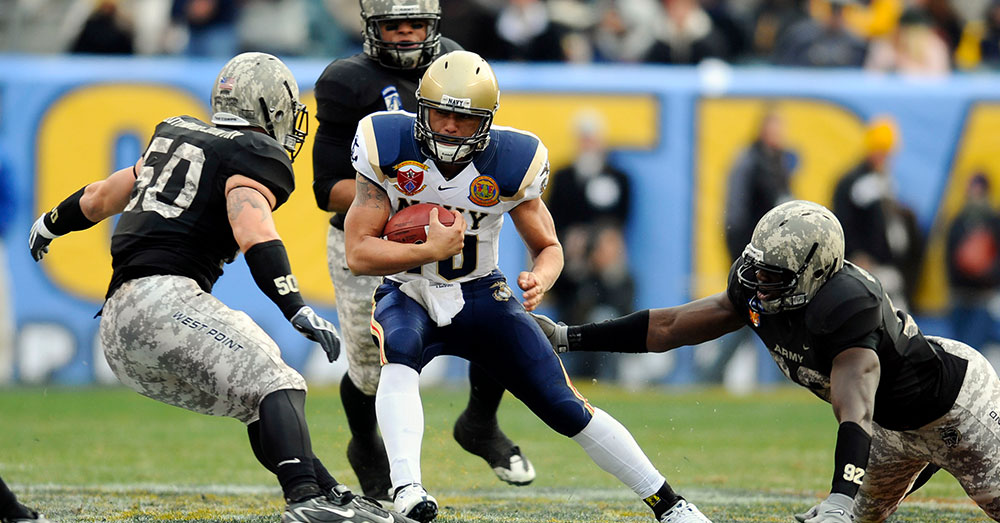 Photo: Wikimedia Commons
U.S. Naval Academy quarterback Kapo-Noa Kaheaku-Enhada (#10) scrambles for a first down during the first half of the 109th Army-Navy college football game at Lincoln Financial Field in Philadelphia.

Adrienne is currently a senior at the United States Naval Academy at Annapolis, MD. She has always wanted to be a pilot, like her dad. She just recently found out that she has been offered an aviator slot after graduation.

Corinne graduated from the United States Air Force Academy in Colorado in 2015. She now pilots MQ-9 Reapers, which are unmanned drones for the Air Force.

These three sisters are great examples of intelligent, strong, independent women who know what they want out of life and how to achieve their goals. They are all excellent students. All of them made the decisions they did on their own, without any family influence. They all were Gold Award Girl Scouts, played several sports, participated in many school clubs and activities, and took the SAT tests several times in order to get higher scores. 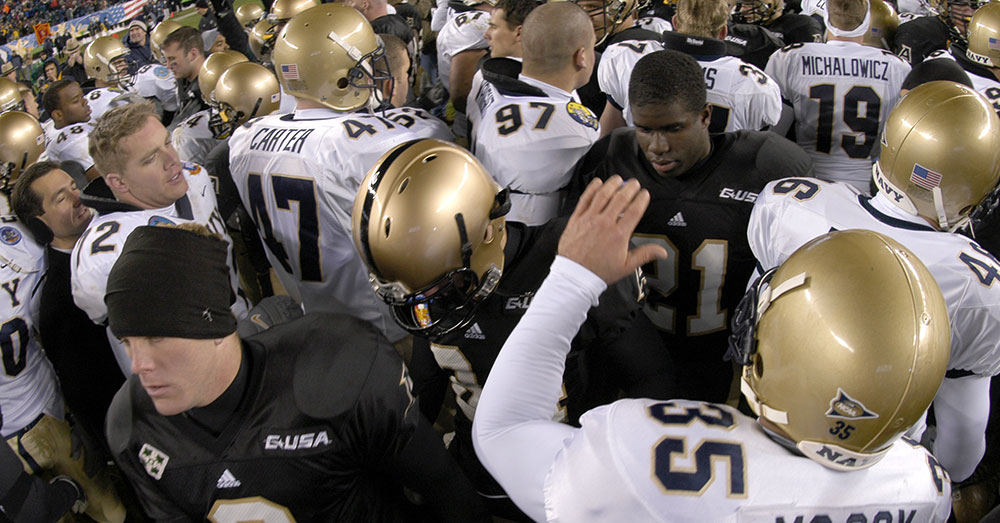 Photo: Wikimedia Commons
Army and Navy football players meet in the center of the field to congratulate each other on a good game following the conclusion of the 104th meeting of Army and Navy.

They were all National Merit Society Scholars as well. They all made it into their respective military academies, which is incredibly difficult in any case as they all accept only about 10% of those who apply.

This past Saturday, in the cold and driving snow of Philadelphia, Madeleine and Adrienne sat on opposite sides of the field dressed in their respective academy dress uniforms, cheering against each other.

Though Madeleine would be able to take home the bragging rights of victory this time, she and Adrienne and Corinne and the entire Easter family can take even greater pride in each other and in their family’s four generations of service to this nation.

The Veterans Site sends its respect to Madeleine, Adrienne, and Corinne Easter for their love of family and country. You are great examples for all of us to follow. May you all have great and successful careers in your respective services.