She Was Perhaps The Most Courageous And Prepared Of All The U.S. Army Nurse Corps

It is with great respect that I write this article to honor the memory of 1st Lt. Mary Louise Hawkins, an Army Nurse who served in the Pacific Theater during the toughest parts of the fighting there, and all those flight nurses who served in WWII and all the wars since then. What Lt. Hawkins did took not only courage but an unusually creative gift for dealing with the unexpected, relying on both a creative genius and a fierce determination to save the lives of the soldiers in her care.

The U.S. Army Nurse Corps graduated its first class of flight nurses on February 18, 1943, at Bowman Field in Louisville, Kentucky. The nurses who would be serving as flight nurses in the battlefield areas knew that they would be flying on aircraft that would also be used for evacuation and transportation of military supplies, which meant that they could not be marked with the traditional Red Cross insignia. With no such markings, their non-combat status would be moot. In fact, these aircraft were very vulnerable to enemy attack. For this reason, all flight nurses and other medical personnel were all volunteers.

These nurses were given extra training in things like crash procedures and survival training. They also studied the effects of high altitudes on various types of patients. The conditions of combat air evacuations of the wounded required that these nurses be in top physical shape as well. These flights would be very rigorous, involving combat landing and takeoff procedures. These aircraft were not like those available for this purpose today. They were far less sophisticated in terms of the equipment and technologies that were available to them at that time and far more vulnerable. 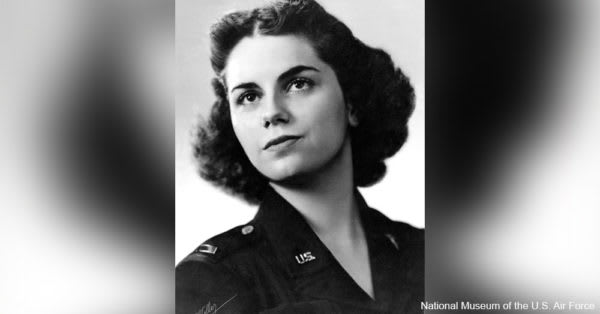 On September 24, 1944, Mary Louise Hawkins was on a flight that was evacuating 24 wounded soldiers from the fighting at Palau to Guadalcanal. The C-47 that she and the wounded were on ran low on fuel and the pilot had to make a forced landing in a small clearing on Bellona Island. As the plane landed hard in that too small space, one of its propellers tore through the fuselage and severed the trachea of one of Hawkins’ wounded soldiers.

This is where Hawkins’ training kicked in and she showed the kind of metal she was made of as a flight nurse. There was no hesitation in her. She was going to keep that severely wounded patient alive no matter what.

The soldier’s airway was compromised and she had to find a way to keep it open. The greatest need in that moment was for a suction tube in order to keep the man’s throat clear of blood until more sophisticated aid could arrive. She looked around and realized that all she had to work with was a “Mae West” life preserver. She removed the inflation tube from the Mae West and used that to accomplish the task at hand.

This contrivance worked so well that she was able to maintain that soldier until further aid arrived 19 hours later. The flight had begun with 24 wounded soldiers under her care. When it was all over, all 24 survived. For her courage and skill in those conditions, Hawkins was awarded the Distinguished Flying Cross.

The Veterans Site wishes to honor all those nurses who have served in the uniforms of our United States military. To those who served in combat capacities, in field hospitals and surgery wards, or in combat air evacuation units, we offer our humble thanks. Your courage under fire and your presence to those of us who were wounded cannot be praised enough.

You are the best!