The United States Marine Corps put out their newest recruiting commercial, and this one is absolutely amazing. Not only does it showcase one of the most elite military forces in the world, but it also features something else that’s special — USMC Capt. Erin Demchko, a female Marine.

The video follows a young girl standing up to bullies in school all the way through serving in the Marine Corps and beyond. It is a great message that shows the true spirit and character of a Marine is lifelong — starting in childhood, forged and refined in the Corps, and lasting long after serving. For a branch of the military that has had a hard time integrating women into its image, this commercial puts a female Marine right in the spotlight for recruitment. It’s a great step towards encouraging strong, young women who want to serve in the military and in the Marine Corps, especially.

“There are Few with the fighting spirit to face down fear, self-doubt and weakness. Will you be among them?” Marine Corps Recruiting says with the video on Facebook. With this being the first time a woman has been the focus of a national recruiting commercial for the Marines, it seems the branch is taking an aggressive step towards integrating more women into its ranks. 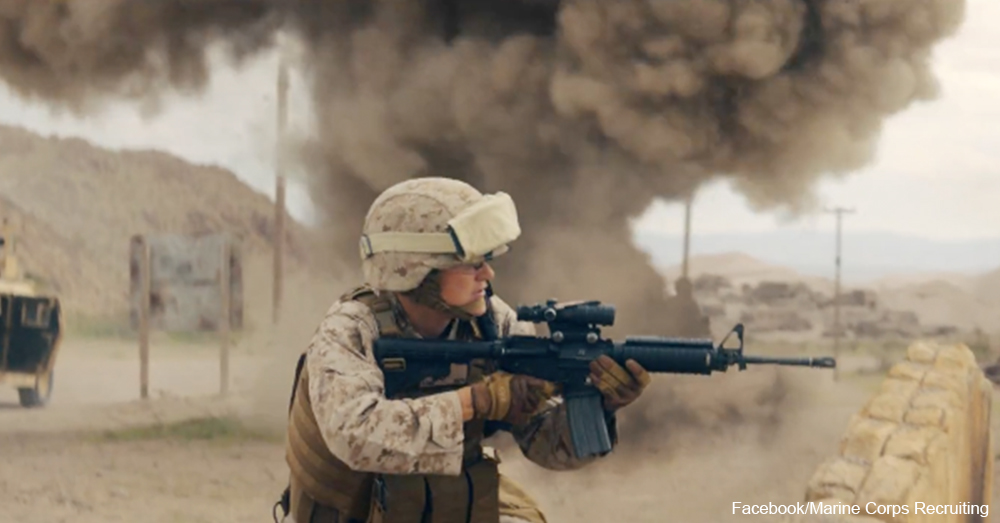 In 2013 a longtime ban on women serving in combat roles was lifted, and in 2016 all combat positions, including front-line combat, was opened to women in the Marines. Finally, in March of 2017, Pfc. Maria Daume became the first female to graduate from the Marine Corps Infantry School.

Maj. Gen. Paul Kennedy, head of Marine Corps Recruiting, said the message of the commercial should get people to “not think that we are only looking for a few good men, that we’re actually using all of our recurring efforts to find good women as well.”

Capt. Erin Demchko, the featured Marine in the new ad, echoed that by saying the commercial “is targeted at young women who are seeking a way to challenge themselves.”

As for filming the commercial itself, Demchko said it was different from what she’s used to, as far as having the cameras and crew right there. She’s used to taking orders from Commanding Officers, not taking directions from a camera crew. “The water was 27 degrees and coated with a layer of thick ice,” she said. “Giving the film production staff what they wanted, while maintaining my bearing as a Marine officer and trying not to look cold, was a challenge.”

Capt. Demchko added, “I am extremely humbled to be a part of such a big production. Professional actors can keep their jobs, though. I’d rather be a Marine.”

Watch this commercial from the United States Marine Corps below!