Sgt. Frank Praytor was the man in the iconic photograph of a Marine feeding a kitten with an eyedropper near the front lines of the war. The black and white photograph was published around the world and has been seen by so many. Sadly, Frank Praytor passed away this month at the age of 90.

Praytor started working as a journalist in his hometown of Birmingham, Alabama in 1947. When the Korean War broke out, he enlisted with the United States Marine Corps and served as a combat correspondent for the 1st Marine Division. In 1952, a photograph was taken of Praytor feeding a small, orphaned kitten on the battlefield. That moment of compassion and hope in the midst of war and tragedy captured the whole world.

Published in more than 1,700 newspapers at the time, the photograph was instantly iconic. For those who knew Praytor, it was just a photograph of him being himself.

“Frank was, first and foremost, a good human being,” friend and fellow Marine Chas Henry told Stars and Stripes. “That picture of him caring for a kitten lost on the battlefield wasn’t just cute; it captured his character. Beyond that, he was an elegant writer and master communication strategist. I was fortunate to be able to count him both a mentor and friend.”

Frank Praytor rescued the orphan kitten after its mother was killed on the battlefield. He named her Miss Hap, he said, “because she was born at the wrong place at the wrong time.”

The kitten was given canned milk with a medicine dropper by Praytor, who was able to get the kitten to eat meat from C rations eventually. A year later, he adopted a stray dog he named Mangy, caring for it until it went missing.

The iconic photograph not only touched the hearts of countless people back home, but it actually helped Praytor get out of some trouble himself. During his service in Korea, Praytor took photographs with his own camera in addition to his work as a combat correspondent. A photograph he took of a wounded Marine being treated by Navy corpsman won a contest in Photography magazine. Unfortunately, sending in the photo without first clearing it with military censors broke a major regulation and put him up for court-martial.

To his relief, Praytor was never charged because the commandant of the Marine Corps tore up the paperwork for the court-martial. The photograph was so famous at the time, prosecuting the Marine probably wouldn’t have been popular with the public.

“I assume the commandant realized I was a celebrity at the time and he let me off the hook, and for that I attribute to the cat,” said Praytor. “That little kitten saved me from the brig.”

After leaving the Marine Corps, Frank Praytor led a successful career in marketing and communications for many years. He and his wife, Katherine, were married for 46 years. The kitten from the photograph, Miss Hap, would go on to become the mascot for the 1st Marine Division’s Public Information Office, where she was believed to be adopted by another Marine and brought to the United States. 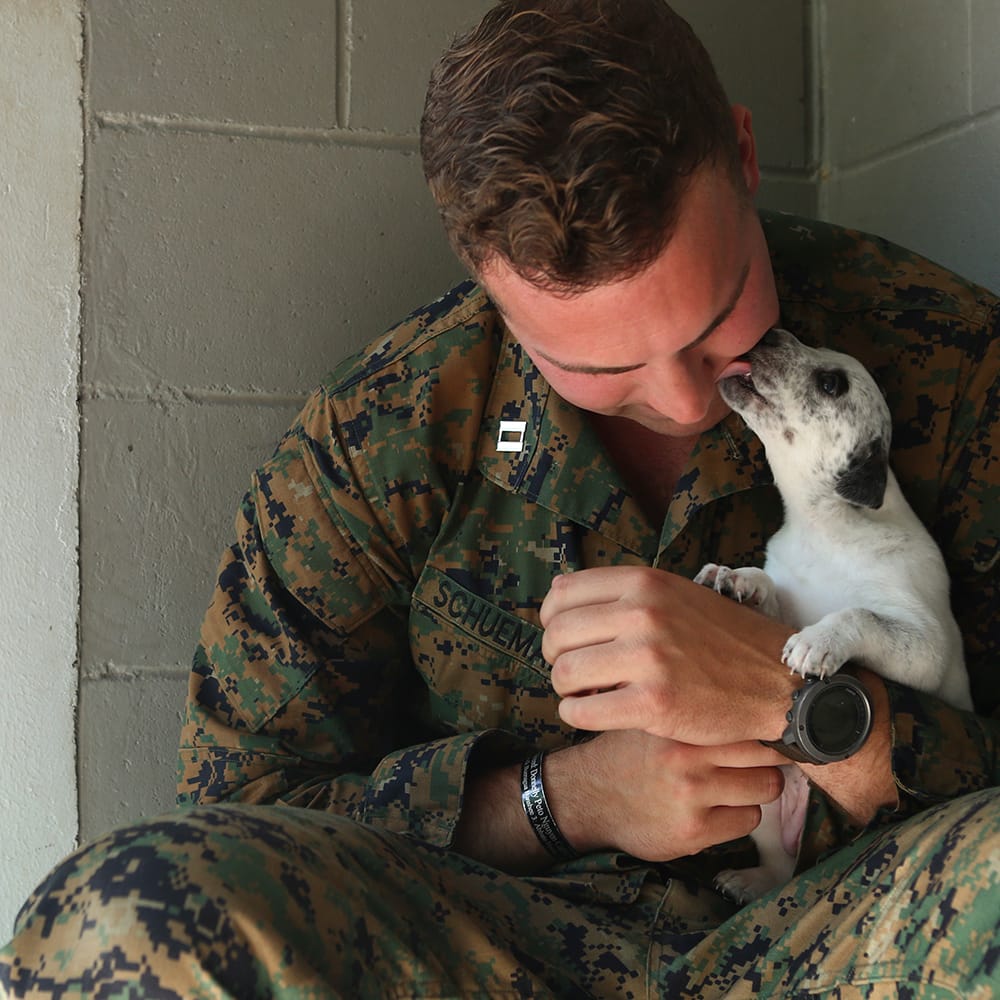 Help our deployed soldiers rescue, care for, and transport free-roaming dogs and cats.

In Afghanistan, it is common for dogs and cats to suffer from abuse and neglect. Many animals are free roaming with no families to turn to for help. If an animal is lucky enough to find its way to a U.S. base and is befriended by the soldiers, then the base becomes the animal’s home and finds love for the first time in its life. Puppy Rescue Mission (PRM) helps these animals, as it would be devastating to turn them back out into the wild when many have never known a different way of life.

You can help them!