Torrential flooding along the Gulf Coast has cost untold damages, forced more than 10,000 out of their homes, and led to the deaths of six so far.

Hardest hit is the state of Louisiana, where hundreds of roads have been closed or submerged, and 1,400 bridges must be inspected before they are reopened to traffic.

But there is hope. Among the stories of homes and loved ones being washed away or swallowed by rising waters are just as many of courageous military veterans taking the initiative to provide support for those in desperate need. With all of their training, veterans are uniquely prepared to handle emergency situations, and the flooding in Louisiana and other Gulf states is cause for emergency. 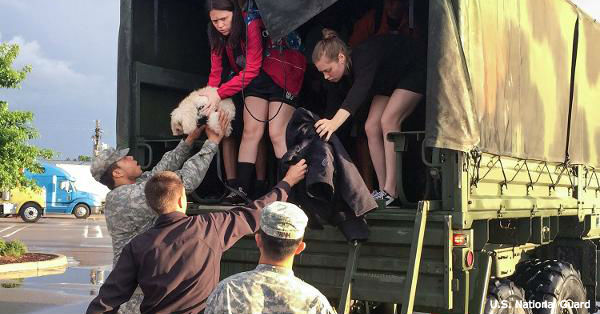 Initially, in Baton Rouge, more than 100 state Air National Guardsmen, some local residents of the area, were activated by Governor John Bel Edwards to provide support for those forced from their homes. Today, there are more than 2,000 personnel mobilized and equipped for rescue and relief missions with around 200 high-water vehicles. Authorities are making the most of their resources, too. THV11 reports that a movie studio’s buildings have been designated as a shelter, where around 3,000 are waiting for conditions to improve.

“I’d never thought I’d be going through something like this again,” said Airman First Class Jeremy Creer, a resident of New Orleans and a member of the 159th CES Civil Air Squadron. “2005, in Katrina, I was the one experiencing this. Now I’m the one helping aid get to those in need, being a part of the Air National Guard.”

“Not only has the National Guard provided security but also provided a wealth of advice and information on how to handle certain situations that the Guard has seen in recent disasters,” said shelter manager Ryan LeMaire. “We have greatly benefited from their expertise in the logistics of moving things all around the world and we really appreciate everything the National Guard has done.”

“That’s what we are focused on: saving lives,” said Louisiana’s adjutant general Army Maj. Gen. Glenn Curtis. “We currently have 1,700 people mobilized. Those numbers will build up towards 2,000 and possibly as high as 2,500 as requests come in.” He continued, “We can also bring on military police and give police officers a chance to rest and check on their homes.”

The Coast Guard took part in a daring rooftop rescue on Saturday, Aug. 13. Check out the footage below!

What the National Guard can’t reach, area citizens are filling in. Stories of last-minute rescues and loved ones reuniting continue to come from the deluged region…

In aid of the rescue and rebuilding effort, Home Depot has made $700,000 in grants available for the American Red Cross, Team Rubicon and Operation Blessing.

Team Rubicon volunteers have drafted Initial Situation Reports and are assessing their ability to respond as the waters recede, positioning resources and working with local partners to serve those affected. Once deployed, emergency response teams will do damage assessments and effectively execute disaster-relief services, including community stabilization, hazard mitigation, debris management, and emergency home repair. 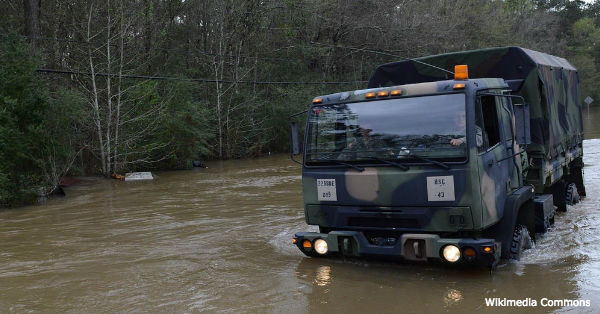 Volunteers are ready to help, but can’t provide immediate flood relief without support. Follow this link to provide them with emergency deployment kits, materials for rebuilding, and food and water.