Wednesday morning, President Trump announced on Twitter that three Americans, held as prisoners, were released by North Korea and were returning to the United States. The release comes at the end of Secretary of State Mike Pompeo’s second trip to North Korea, and on the heels of historic peace talks between North Korea and South Korea.

The three American prisoners released are Kim Dong-chul, Kim Hak-song, and Tony Kim. Kim Dong-chul is a pastor in his late 60s and was imprisoned by North Korea in 2015 and sentenced to a decade of hard labor. The other two men, humanitarians who worked at the Pyongyang University of Science and Technology (PUST), were each imprisoned in 2017. The charges against the men ranged from “hostile acts” to espionage, and the BBC reports “their imprisonments have been widely condemned as political and an abuse of human rights.”

All three men were flying to the United States with Secretary of State Mike Pompeo and were expected to reach Andrews Air Force Base in Maryland around 2 a.m. Thursday. President Trump said he will be there to personally welcome them home. 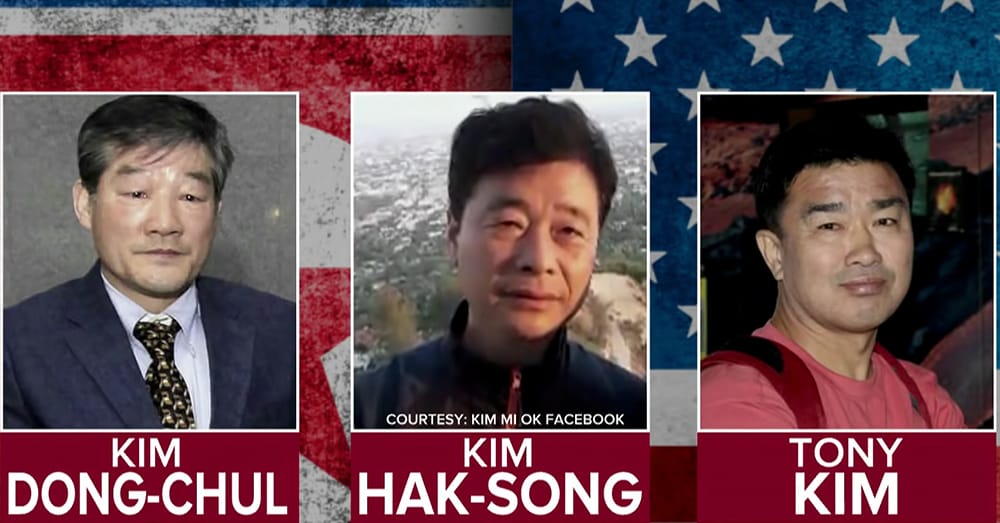 “I am pleased to inform you that Secretary of State Mike Pompeo is in the air and on his way back from North Korea with the 3 wonderful gentlemen that everyone is looking so forward to meeting. They seem to be in good health,” President Trump wrote on Twitter. “Also, good meeting with Kim Jong Un. Date & Place set.”

NPR’s Anthony Kuhn pointed out that all three men had religious affiliations and that their arrests were political in nature. “One is a pastor, one is a self-described missionary. Two of them taught at this school called the Pyongyang University of Science and Technology, which was founded by evangelical Christians and teaches children of North Korean elites,” he said. “Experts basically believe that these three were basically detained in order to serve as bargaining chips with the U.S. for North Korea, or even, in the event of a military conflict, human shields.”

A statement from the White House on Wednesday said, “President Trump appreciates leader Kim Jong Un’s action to release these American citizens, and views this as a positive gesture of goodwill. The three Americans appear to be in good condition and were all able to walk on the plane without assistance.” 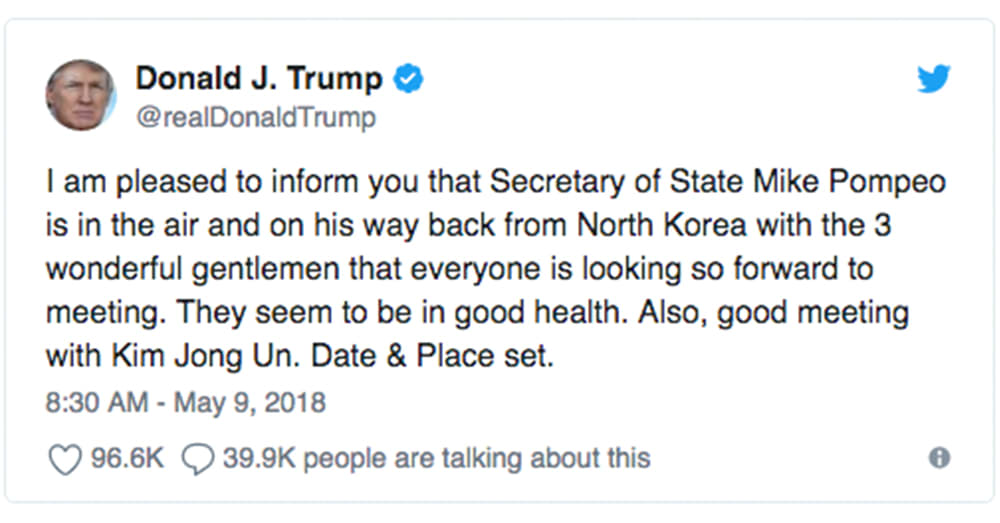 The last American imprisoned and released from North Korea was 22-year-old college student Otto Warmbier, who was detained by the communist country in early 2016. He was imprisoned in North Korea for 15 months until he was finally released in June 2017. However, Warmbier suffered from severe brain damage and was unresponsive when he was returned the to United States and died a week later. His parents, Fred and Cindy Warmbier, have filed a lawsuit against North Korea for allegedly torturing their son and causing his death.

With the release today of Kim Dong-chul, Kim Hak-song, and Tony Kim (also known as Kim Sang-duk), there are no other Americans believed to held by North Korea currently.

Greg Scarlatoiu, executive director for the Committee for Human Rights in North Korea said he was glad to hear about the three Americans being released, but also said this is “a time to remember the 120,000 men, women, and children held in North Korea’s political prison camps as well as political prisoners held at other unlawful detention facilities.” 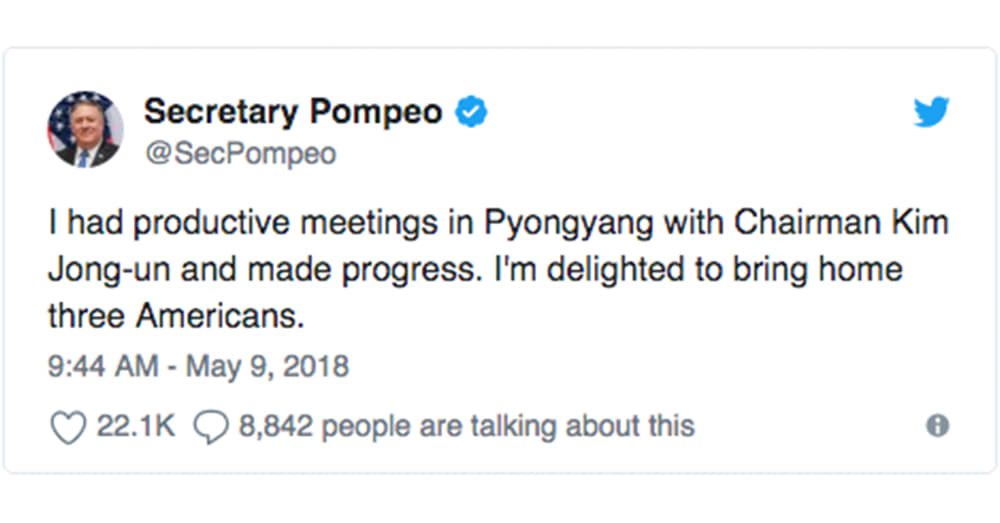 “We are very grateful for the release of our husband and father, Tony Kim, and the other two American detainees. We want to thank all of those who have worked toward and contributed to his return home. We also want to thank the President for engaging directly with North Korea. Mostly, we thank God for Tony’s safe return,” read a statement from the Kim family.

That statement continued, “We appreciate all of the support and prayers of friends and even strangers during this challenging year. You are dear to our hearts. We ask that you continue to pray for the people of North Korea and for the release of all who are still being held. Thank you.”

Watch news coverage of the release in the video below!

Learn More About The Peace Talks Between North & South Korea: Click “Next” below!