The year was 1968. It was January 21 and the beginning of the Vietnamese New Year, or Tet. The place: the Marine forward air base at Khe Sanh in the extreme northwest of Quang Tri Province, the northernmost province in what was then the Republic of South Vietnam.

It was a Sunday morning and Chaplain Ray Stubbe was going over his sermon notes when all hell broke loose. The North Vietnamese Army forces who had surrounded the base opened up with heavy bombardment of artillery and mortar fire. The 77-day siege had begun. 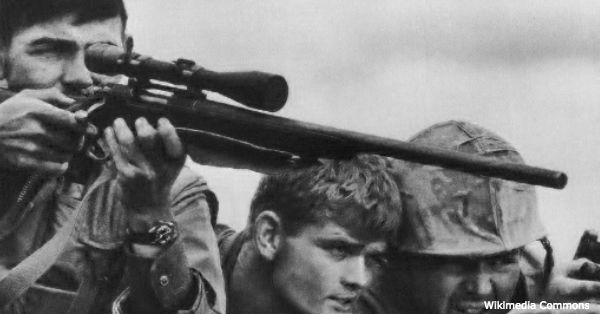 A Marine Corps sniper team searches for targets in the Khe Sanh Valley.

There were about 6,000 of us Marines and Navy Corpsmen, a reinforced Marine Regiment, on the mile-long, half-mile wide air base. We were surrounded by from 20,000 to 40,000 North Vietnamese Army troops (NVA). They were a well trained and equipped, highly experienced and fiercely determined force led by General Vo Nguyen Giap.

They were determined to make Khe Sanh the American’s Dien Bien Phu, which was the siege where the NVA, under the same General Giap, defeated the French in 1954.

The siege began with an intense artillery and mortar barrage that hit the fuel dump and the ammo dump at north end of the base. Chaplain Stubbe and the rest of us would endure another 77 days of such bombardments, along with occasional NVA infantry attacks probing for weaknesses along our perimeters.

Khe Sanh would be one of the bloodiest battles of the Vietnam War. My own company of Marines, Bravo Co. 3rd Recon Bn. 3rd Marines would suffer a 40 percent casualty rate. This was similar to that of the 26th Marines who were the largest contingent on the base. Units of the 9th Marines were occupying several hills around the base and many of them became engaged in fierce hand to hand battles over that period.

Chaplain Stubbe was there with us throughout the siege. He comforted us, was always with us in the thick of the battles. He would go out to the Marines who were engaged in the heavy hill fights. His presence, his courage, and sense of humor was a very important part of our ability to endure.

The Chaplain alluded to the fact that we all knew we were probably going to die there, which affected all of us in varying ways. Mostly, we became indifferent to the idea of dying. The deaths of our brothers, and the threat of our own death became the landscape of our inner mental and exterior physical environments. It walked and slept and ate with us for those 77 days. Chaplain Stubbe offered us both spiritual comfort and the faithfulness of his camaraderie with us. He was one of us. 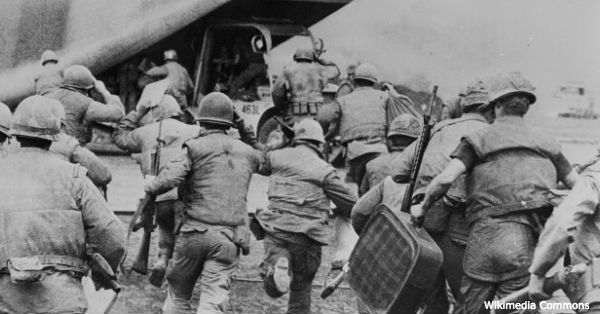 The final evacuation from the Khe Sanh base complex.

Chaplain Stubbe would go on to co-author a book with John Prados about the siege at Khe Sanh called “The Valley of Decision.” He also self-published an account of those who died during the siege, called “Battalion of Kings.” Chaplain Ray Stubbe is beloved by all the Khe Sanh Marines. I hope to see him at this year’s Khe Sanh Marines reunion in San Antonio this October.

The Veterans Site offers its respect and thanks to chaplain Ray Stubbe and all those Marines and Navy Corpsmen who fought the good fight at Khe Sanh.

To those who fell, we promise we will never forget you.

Read about a previous reunion that brought this Vietnam veteran back toegther with his buddies fro Khe Sanh by clicking the button below!