John McCain’s Diagnosis Is Met With Heartwarming Messages Of Support

Senator John McCain has been diagnosed with a brain tumor, following the removal of a blood clot at the Mayo Clinic in Phoenix, Arizona. The type of cancer — glioblastoma — is a particularly aggressive form of cancer, with the American Cancer Society giving a four percent survival rate for patients over the age of 55. However, the lawmaker and retired Navy veteran has faced hardships in the past, and it looks like he’s going to face this next challenge with as much grit.

Sen. McCain, the son of a Navy Admiral, joined the Navy during the Vietnam War where he flew as a combat pilot. He survived the fire on the USS Forrestal, which killed 134 sailors, but was wounded by an explosion. He was then assigned to the USS Oriskany, where he continued flying combat missions. On October 26, 1967, his plane was shot down over Hanoi, the capitol of North Vietnam. He was captured and taken to the Hoa Loa prison, called the “Hanoi Hilton,” where he would spend five years imprisoned and tortured as a prisoner of war. For his service, McCain received the Silver Star, Bronze Star, Distinguished Flying Cross, and the Purple Heart.

The POW veteran would go on to make a career in politics, getting elected as a U.S. Congressman in 1982 and then becoming a Senator in 1987. He was a candidate for President in the 2008 election against then-Senator Barack Obama, and has continued to serve in the U.S. Senate since. When news of his cancer diagnosis came out Wednesday evening, leaders throughout Washington were quick to respond. 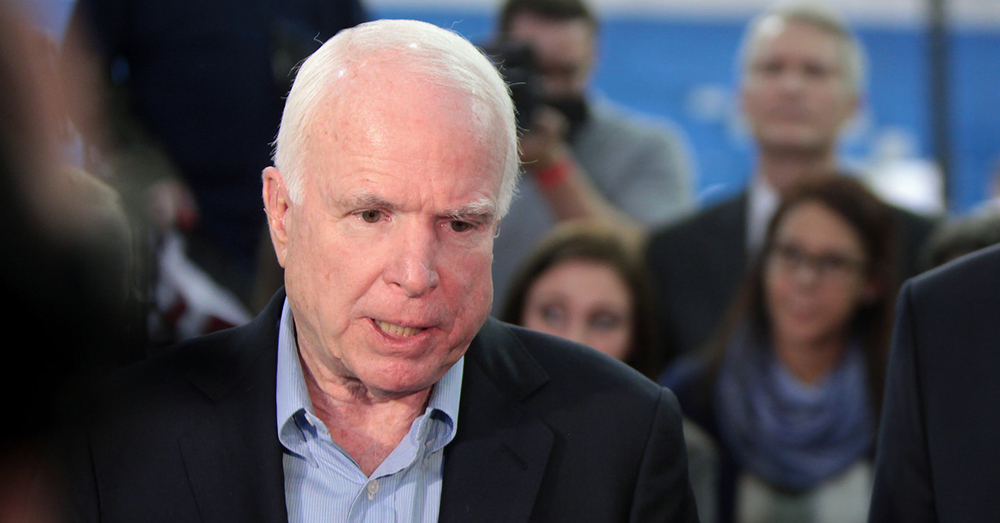 Former President Barack Obama, once his political rival, had a particularly poignant and heartfelt message for the Senator, which he put out on Twitter Wednesday evening. “John McCain is an American hero & one of the bravest fighters I’ve ever known,” Obama said in his tweet. “Cancer doesn’t know what it’s up against. Give it hell, John.”

Other former Presidents also expressed their best wishes and encouragement for McCain, praising his resilience throughout his many previous hardships. Former President Bill Clinton said on Twitter, “As he’s shown his entire life, don’t bet against John McCain. Best wishes to him for a swift recovery.” Former President George H. W. Bush said on Wednesday, “The Hanoi Hilton couldn’t break John McCain’s spirit many years ago, so Barbara and I know — with confidence — he and his family will meet this latest battle in his singular life of service with courage and determination.”

In fact, a flood of encouragement and support from politicians, lawmakers, and leaders throughout the county — and on both sides of the political spectrum — came pouring in as soon as the news of his brain tumor diagnosis was released. 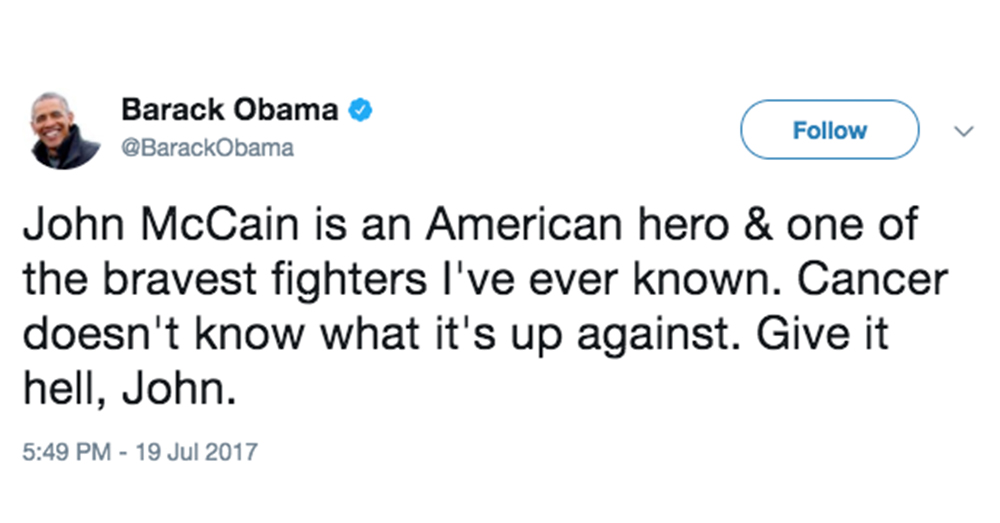 Twitter/@BarackObama — Former President Barack Obama, once a political rival, had strong words of encouragement for McCain.

According to his doctors, McCain is recovering in the hospital and doing very well. “The Senator and his family are reviewing further treatment options with his Mayo Clinic care team,” the hospital said in a statement. “Treatment options may include a combination of chemotherapy and radiation.”

In 2009, Senator Ted Kennedy died from the same type of malignant brain tumor McCain has been diagnosed with. However, McCain’s doctors say that his underlying health is excellent, and they are hopeful that treatment will help. There was no immediate news about when McCain would be returning to the Senate.

Meghan McCain, Sen. John McCain’s daughter, had inspiring words about her father on Twitter. “It won’t surprise you to learn that in all this, the one of us who is most confident and calm is my father. He is the toughest person I know. The cruelest enemy could not break him. The aggressions of political life could not bend him. So he is meeting this challenge as he has every other. Cancer may afflict him in many ways: but it will not make him surrender. Nothing ever has,” she said.

The outpouring of support continues to come in as leaders react to the news of Sen. McCain’s diagnosis, as seen below. The Veterans Site joins with so many others in wishing Sen. John McCain a fast and thorough recovery, and our thoughts and prayers are with him and his family.

Karen & I are praying for @SenJohnMcCain. Cancer picked on the wrong guy. John McCain is a fighter & he’ll win this fight too. God bless!

John and I have been friends for 40 years. He’s gotten through so much difficulty with so much grace. He is strong – and he will beat this.

.@SenJohnMcCain has always been a warrior. It’s who he is. All of us, not as Republicans or Democrats, but as Americans, are behind him. pic.twitter.com/B6iDpPultM

.@SenJohnMcCain is a hero, a patriot and a fighter. I am privileged to call him a friend. Paul & I pray for his recovery and his family.