The average American with no military experience, no reference points to understand a man like General James Mattis, might not think much about him, other than the fact that he is the President-elect’s nominee for Defense Secretary.

They might react with chagrin at the moniker, “Mad Dog,” which was given by those who served under him, owing to their affection and their respect. They might say that that’s just one of those macho Marine Corps things, but you would miss the target by a country mile thinking that.

Oh, it is a Marine Corps thing, for sure. But it is not a matter of knuckle-dragging, warrior cult braggadocio. General Mattis is much more than that. He is a man of uncompromising integrity and wisdom. He is a scholar and a warrior poet. That is, he knows that war is a terrible thing, that it demands more moral courage and commitment of the soldier than of the civilian in the rear. He understands that the world, despite our deepest, most heartfelt desires for peace, is not a peaceful place.

Because of this reality, he understands that a nation of free people needs a ready, willing, and able fighting corps to stand between the innocent and those who, for the sake of some medieval, or materialist political ideology, either threaten or actually bring war upon us. 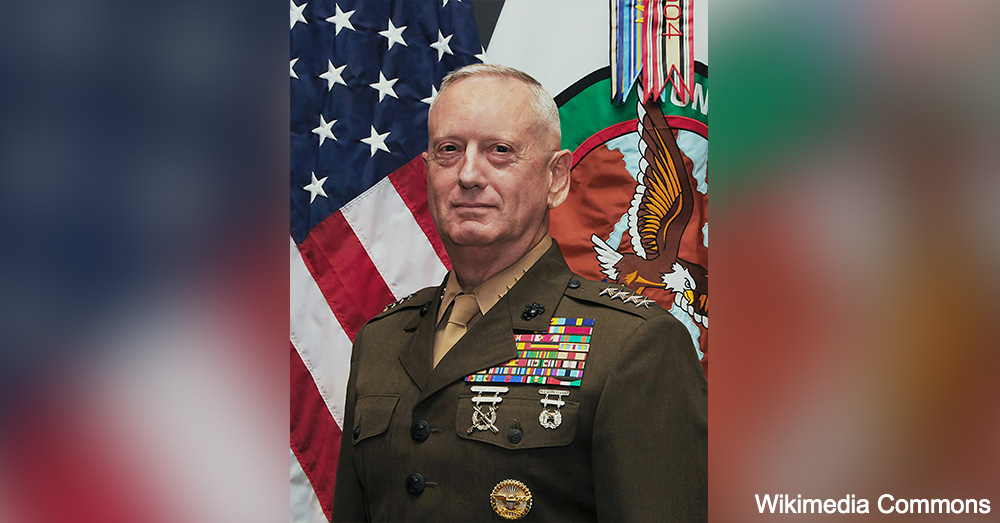 Marines love him because they respect a man of personal courage and integrity; a man who truly loves the Marines he leads. He treats them all, from boot private to general, with the respect a fellow human being deserves. Mattis is one who has willingly chosen to serve the nation, who has endured the hardest training, who when he received his Eagle Globe and Anchor at the end of that training, broke into tears of pride and accomplishment. He understands the brotherhood and leads from that understanding.

This is a man who has studied war and fought it. He is also a literary man and a philosopher. In other words, he is a man who thinks, who prepares, who considers deeply. His mind is shaped by the breadth of the world of ideas.

When the unforeseen circumstances of war fighting come up, as they always do, his preparation and consideration has given him the ability to respond quickly and with effect. He is a Marine’s Marine.

In 2014, a year after he retired from a 41 year career in the Marine Corps, Mattis was given the Semper Fidelis Award at the Marine Corps University’s Semper Fidelis Award Dinner. The following is a quote from the speech he gave upon receiving the award. It gives us a small insight into this man. The entire speech is worthy of being read, but this is a good taste of it:

“Now from a distance I look back on what the Corps taught me: To think like men of action, and to act like men of thought! To live life with intensity, and a passion for excellence, without losing compassion for mistakes made by high-strung, young patriots who looked past hot political rhetoric and joined the Corps,” The General said. “It taught me to be a ‘coach’ in General Lejeune’s style, summoning the best from our troops. The Father to Son, Teacher to Scholar bond that brings out the vicious harmony when together, we close the enemy. We were taught that the strongest motivation we all have, whether an F-18 pilot, or a Huey door gunner, whether a ‘cannon cocker’ firing a mission, or a logistics Marine hurrying supplies forward, the motivation that binds us, is our respect for and commitment to a 19 year old Lance Corporal infantryman upon whose young shoulders our experiment called America ultimately rests.”

In this writer’s opinion, Mattis is the right man for the job of Defense Secretary at this time in history. It is my hope that the President-elect will come to respect him in the way that his Marines do from the boot-private to his peers in leadership, that he will listen to this man, and seek out his counsel on matters concerning the military defense of the nation, and the just care for this nation’s veterans.

These are troubling times. We need a man of this thoughtful caliber in that position. Like all good warriors, he hates war, but knows that reality makes it necessary to be prepared to the highest levels. He knows that war must be governed by moral character. This man is an example of that character. He has inspired his Marines to that character as well. We hope that he is confirmed quickly and wish him Godspeed in his efforts.

General James Mattis is truly an officer and a gentleman in the best Marine Corps tradition. Those who are Marines know this. We hope that the nation will get the benefit of his service as Defense Secretary. For his 41 years of service to the nation in the United States Marine Corps we say, OooRah!

You are the bold, certain face of the Marine Corps motto.

Want to hear more about this softspoken hero? Click the button below to read about one veteran’s chance encounter with this “warrior monk,” and the moment they shared at Arlington National Cemetery.