During the summer of 2018, police and fire departments all over the United States had a little much-deserved fun with the “lip sync challenge.”

Essentially, these departments share videos of the dedicated officers performing a lip sync dance to a popular song, then they challenge a neighboring force to do likewise. The idea is to show our public servants in a positive light and encourage interaction between cops and the public they serve. Plus it’s just fun!

One police department in Georgia decided to use this challenge to accomplish more than just making people smile. The Pickens County Sheriff’s Department in Pickens, Georgia, took the opportunity to educate the public about a critical issue in our society: domestic violence.

The resulting video is incredibly powerful; so much so that we must include a trigger warning due to the realistic depiction of abuse in the video.

The video starts off like all of the other lip sync challenges we’ve seen to date, with the men and women of the Pickens County Sheriff’s Department busting a move to the ’90s dance song, “Whoomp! (There It Is)” by Tag Team.

But when the Sheriff himself steps into the room, the music comes to an abrupt halt.

“Really?” The Sheriff asks incredulously. “What’s wrong with thinking outside the box and doing something different? We are determined to make a difference, right?”

This is where the video departs from the norm and heads into important, but devastatingly hard-to-watch territory. Ninety-three staff members on the police force volunteered their off-duty hours to create this video, and at first, they weren’t sure how far they should go. Some members of the department thought they might be better off keeping things lighthearted, but soon they realized how important their message truly was.

“Everyone was not on board until we watched the first draft of the video and we realized we were onto something,” said Captain Kris Stancil. “We knew we wanted to show what it really looked like and there’s no easy way to portray that.”

The next song we hear is “Titanium” by David Guetta and Sia, a powerful song that perfectly captures the mood and terror of the scene that’s unfolding on the screen. In the video, the Sheriff plays a domestic abuser who comes into the room where his wife and daughter are watching TV. He instantly starts a fight, and within seconds he’s beating his wife.

As the wife and her abuser wrestle and fight in the living room, their young daughter, played by the niece of a staff member, runs to her room and hides behind her locked door. She pulls out a phone and makes a call, and we see her call received at the Sheriff’s dispatch office.

As the abuser, his victims, and the police act out their parts, they continue to lip sync to the song. The lyrics match the video perfectly.

As the police rush to the scene of the attack, the music builds to a crescendo and it’s nearly impossible to fight back the tears. There’s a certain visceral reaction to watching violence in the home, even if it is fictional.

At last, the police rush in and arrest the abuser. The daughter who made the call is immediately wrapped in a hug by a female officer who finds her hiding in her room.

The video ends in an even more non-conformist fashion, with an officer reading a statement about domestic violence in their state.

“According to most recent statistics, law enforcement in Georgia have responded to 65,487 family violence incidents in one year. Within the past year, approximately 15.5 million children have witnessed acts of domestic violence nation wide. We challenge you, our community, to help bring an end to family violence. If you or someone you know are being abused, there are community and state-wide resources available to you. Call the 24-hour hotline, 1-800-33-HAVEN for a confidential place to find help and resources.”

The response to this unusual lip sync video was immediate. The video instantly went viral with millions of views, and victims of domestic violence praised the police force for spreading the word about a troubling reality many people go through every day. 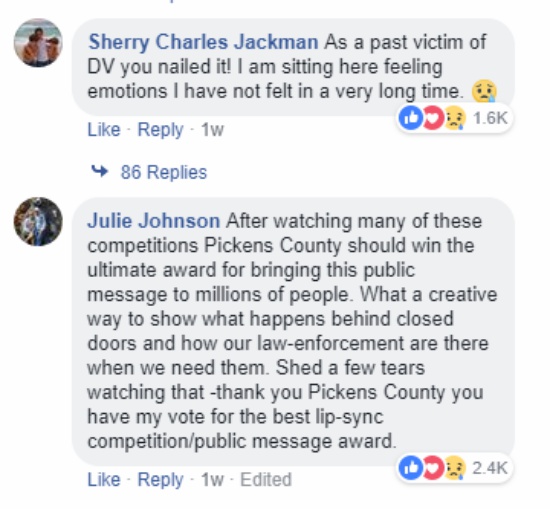 Ruth Glenn, president and CEO of the National Coalition Against Domestic Violence, said this video is a great step towards raising awareness and helping victims locate the resources available to them across the country.

“Many, many women experience domestic violence just like that,” Glenn said. “I hope people take away that domestic violence is real, it is an act of terrorism and to have children exposed to that by perpetrators is awful with huge, long-term effects.”

It’s heartbreaking to think that this terrifying scene is a reality for so many people in our country, but hopefully, with more awareness, we can all do our part to end the cycle of abuse that happens behind closed doors each day. In spite of it all, it’s comforting to know that there are brave men and women who are ready to rush to our aid if we need them.

Watch the video below, and be sure to share this important message far and wide.