Imagine this: you’re a new soldier, boarding an airplane for your first deployment. As the line slowly marches forward, your heart and thoughts are racing at a hundred miles per hour. Will your spouse be okay? What about your kids? What will life be like overseas? And perhaps the most horrifying question of all: when you return, will you step off a plane or be shipped to your grieving family in a casket?

Then you see an elderly lady with long hair throwing her arms around each soldier in line as they walk past. She gives you a smile as she does the same to you, whispering a well-wish in your ear. The warm gesture brings a smile to your face as you venture on. The dark clouds ahead may not have dissipated completely, but they are now lighter, thanks to the comforting arms of a stranger. 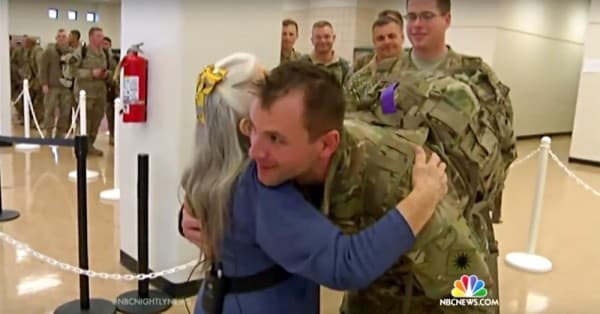 This scenario is what many Fort Hood soldiers have perhaps experienced—all thanks to Elizabeth Laird, the Hug Lady.

The 83-year-old from Texas has been greeting and well-wishing departing and returning soldiers this way since 2003—perhaps in part due to her own military background; she grew up in a military family and became an Air Force veteran in 1950, on her 18th birthday.

Then she decided to start personally thanking our troops. The gesture originally began with handshakes, but one day, a soldier asked for a hug. Then another soldier wanted one. And another. And another. With that, she turned into the Hug Lady—a constant, dependable presence in the lives of many deployed and returning troops. She was always there, no matter what day or time it was. Her hugs even became something that troops looked forward to.

But as troops went off and fought in wars, she silently fought one of her own: breast cancer. She’d been diagnosed in 2005, but the news didn’t reach most soldiers’ ears until she was hospitalized for tachycardia in November 2015. The cancer had also spread to her lungs and bones by this time.

The troops responded by returning the favor she’d given them.

Many of them visited her in the hospital with hugs to share and words of encouragement on their lips. Laird’s son, Richard Dewees, also set up a GoFundMe page to help pay the bills. Within a month, they majorly surpassed their original goal of $10,000, raising nearly $95,000! Along with these donations, soldiers she’d greeted had warm words for her. One said,

Ms. Elizabeth, you gave us just an ounce of humanity before we spent the next year of our lives in a place that was tantamount to hell and devoid of humanity…The gift you gave us upon departure is immeasurable.

I wish I could tell you Laird is now recovering and doing well. Sadly, however, she passed away on Christmas Eve, 2015. Many have been affected by the news—not at all surprising, as she gave about 500,000 hugs in the span of 12 years.

“My heart is so broken to hear that she is gone!” one person commented on her GoFundMe page. “[RIP] to one of the most selfless[,] caring[,] loving people. You will never be forgotten.”