The men and women of the United States Armed Forces are known for their dedication and precision — but the members of the Air Force Honor Guard take that commitment to a whole new level. Training tirelessly for months and years to perfect their skills, they conduct drills that are nothing short of dazzling displays of awe-inspiring accuracy.

Performed around the world for both civilians and other military personnel, Honor Guard members use their skills — tossing, spinning, and catching their rifles, synchronized maneuvers, and more — to inspire, impress, and showcase the skills of the United States military.

That skill and precision was put on full display in a recent Facebook video by the U.S. Air Force Honor Guard, in which Colonel John “Dragon” Teichert, 11th Wing Commander, walks straight through the “Drill Team’s gauntlet for the first time after only one hour of training!”

As the rifles are tossed in the air on either side, Col. Teichert smoothly walks down the middle of the “gauntlet” in perfect time to not be hit. There’s no hesitation, no fear, and no mistakes. Luckily, however, there is some slow-motion! 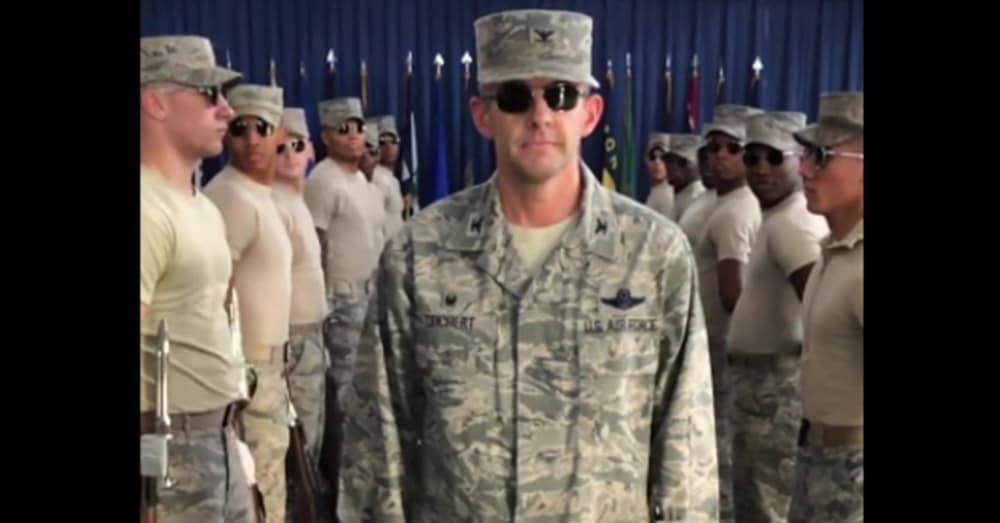 “A standard USAF Drill Team performance features a professionally choreographed sequence of show-stopping weapon maneuvers, precise tosses, complex weapon exchanges, and a walk through the gauntlet of spinning weapons,” according to the Air Force. “The Drill Team also provides an incredible four-person performance centered on a stationary drill commander, flanked by four team members who simultaneously hurl their 11-pound weapons over and around the commander — performing a sequence of events unmatched by any other professional military drill team.” 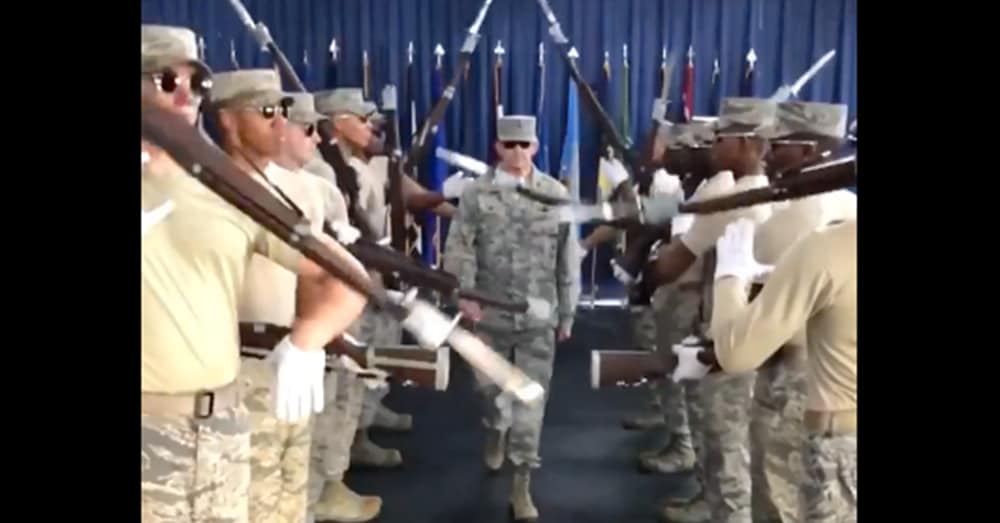 “It’s a very unnatural thing to be doing,” said Staff Sgt. Alexander Wilson, NCO in charge of the team’s training. “It’s very unorthodox for the body …throwing an 11 to 14 pound rifle with an 11-inch bayonet attached to the top. To get to the level we are at now is just training. Drilling has taught me that with enough training, anything is possible.”

The M-1 rifles that the Honor Guard uses weigh 11 pounds and have a sharpened bayonet attached to the end of the barrel. Knowing that makes the Honor Guard’s performance even more impressive and Col. Teichert’s trust in the men unbelievable.

Watch this amazing video — you won’t believe your eyes!