Hurricane Harvey is over now, but the extent of the devastation it wrought is just beginning to be realized. The Category 4 Hurricane made landfall on August 25 near Rockport, Texas, and continued for more than five days. The record-breaking rainfall dumped 27 trillion gallons of rain on Texas alone, with some portions of the state getting as much as 52 inches of rain. The result, besides the damage from the 130 mph winds, was devastating flooding throughout Harris County, which includes Houston.

The hurricane, which eventually weakened to a tropical storm, also caused flooding in Louisiana, Arkansas, Kentucky, and Tennessee.

Tens of thousands of Texans were displaced from their homes and evacuated to shelters. Thousands more were unable to get to safety in time before the flooding began and needed to be rescued. Along with local first responders, the National Guard, Coast Guard, Air Force, and Marine Corps — as well as civilian volunteers like the Cajun Navy — all helped with the rescue efforts. Sadly, there have already been more than 60 confirmed deaths from Hurricane Harvey, and the flooding will take weeks, if not months, to subside. 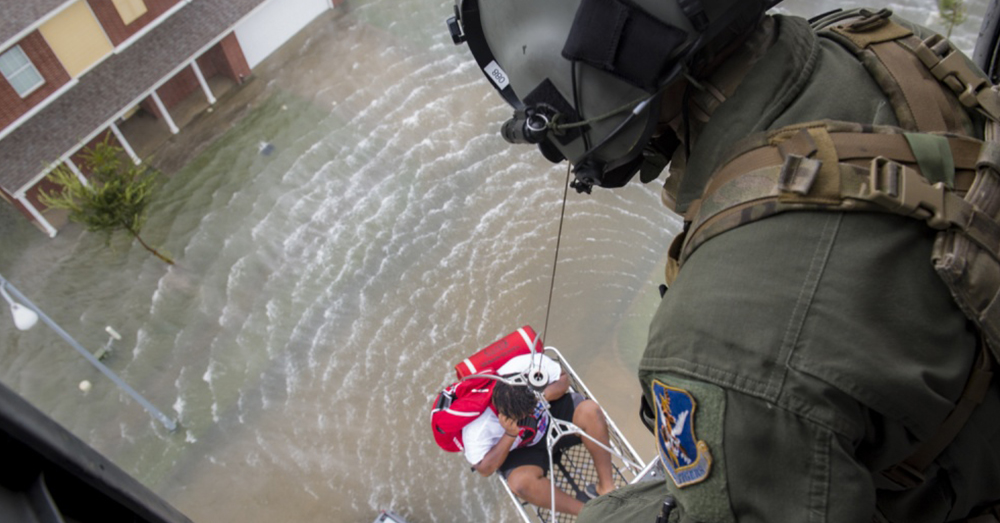 As efforts continue to help those in Texas regain their lives after so much loss, footage has emerged of amazing rescues by the Coast Guard, Air Force, and other groups. These videos give a glimpse of the unrelenting spirit of America’s service members to protect and defend, and perhaps show a gentler side of the military than the public is used to seeing. Most of all, these images and videos of rescues give hope to the people of Texas and the whole country that strangers are willing to risk their own safety to help others in times of need.

While some public commentators would have the public believe that America is a divided nation along political, economic, or racial lines, the selfless rescue efforts following Hurricane Harvey prove otherwise.

Watch below as an Air Force helicopter rescues a family trapped in the flood waters, showing a glimpse of the flood’s huge extent in the area.

The National Guard, military branches, first responders, and civilian volunteers worked from both the air and on the ground, mostly using small boats to navigate through the flooded neighborhoods and rescue individuals who were trapped.

These amazing rescues are wonderful to watch, and we applaud all of the brave men and women who helped rescue those trapped by flooding and continue to help with the recovery efforts in Texas.

In the next video, watch as members of the Coast Guard hoist people and animals out of the water and into the rescue helicopter!

The efforts in Texas are ongoing, as there are thousands of people that need your help!
Make a difference!