With her husband deployed overseas, Jaime Walters was late sending in a check to cover storage fees for his motorcycle to Reiman’s Harley-Davidson. She took responsibility for the late payment and included an apology letter. The response she got from the dealer shocked her and soon went viral.Jaime’s husband, Christopher Walters, had been in the Army 23 years when he was deployed overseas.

He decided to store his motorcycle at Reiman’s Harley-Davidson while he was away. When Jaime made the late payment, she wrote a letter explaining that the payment was late because her husband had just been deployed.

When Dennis Packee, Dealer Principal at Reiman’s Harley-Davidson, saw the letter, he immediately told an employee to send back the check. Next, he wrote a letter to both Christopher and Jaime explaining that the dealer’s policy is to store motorcycles for deployed active duty service members free of charge. He also said that the dealer considers storing the motorcycle an honor and a way of thanking soldiers for protecting the country. 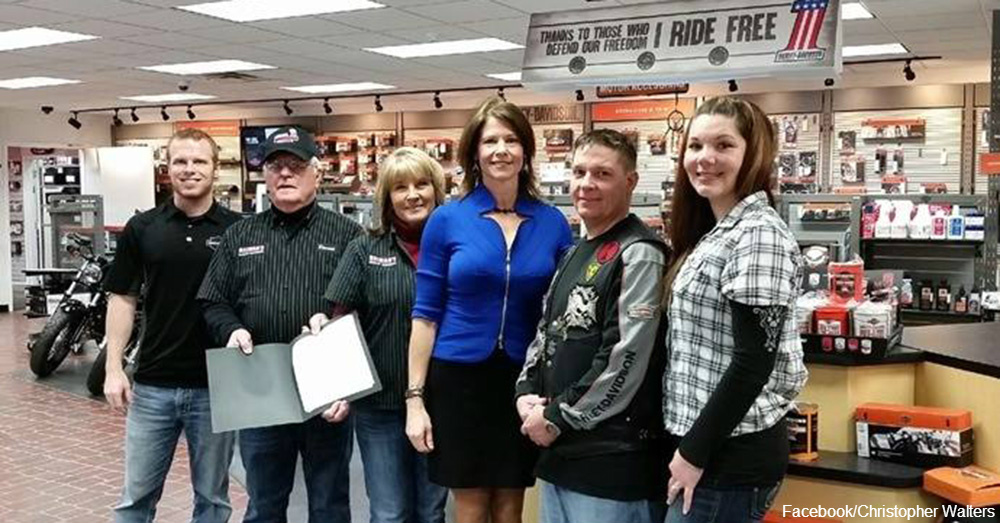 Packee says this has always been the dealer’s policy, and he does this for service members regardless of motorcycle brand. He has thanked other service members this way multiple times, but this time around, the letter was posted on Facebook. After hundreds of thousands of shares, Packee began receiving calls from both service members and civilians thanking him for his actions. Packee even got a call from Rear Admiral Terry Kraft, who contacted Packee while at sea on the USS Ronald Reagan.

Just hearing about Packee’s actions can bring a smile to anyone’s face. However, to truly appreciate his kindness and generosity, check out his letter on Facebook.Packee’s generous policy is just one example of the ways businesses show their appreciation for our service members and veterans. For more about businesses supporting our troops, read this story about a car dealership that helped a veteran after his car was stolen.