A lot of veterans are getting the “thank you” and recognition they deserve in Massachusetts these days, but it’s coming from a surprising person. Jeffrey, a 10-year-old boy from Agawam, Mass., is on a mission to thank veterans as he can for their service, shake their hand, and ask for their autograph. He already has hundreds of signatures in his black book and he is determined to thank as many veterans as he can before Veteran’s Day.

After learning about his late grandfather’s service in the Navy, and gaining a remarkably deep appreciation for someone his age, Jeffrey took the issue to heart. One day he randomly approached a veteran at the store and asked if he could shake the man’s hand. According to his mother, it was an emotional experience for all of them. Jeffrey immediately told his mother that he wanted to make a “campaign” out of it and that’s exactly what he’s been doing ever since. From veterans he comes across throughout the day to attending events, memorials, and even military bases, Jeffery is on a mission to personally thank as many members of the military as he can. 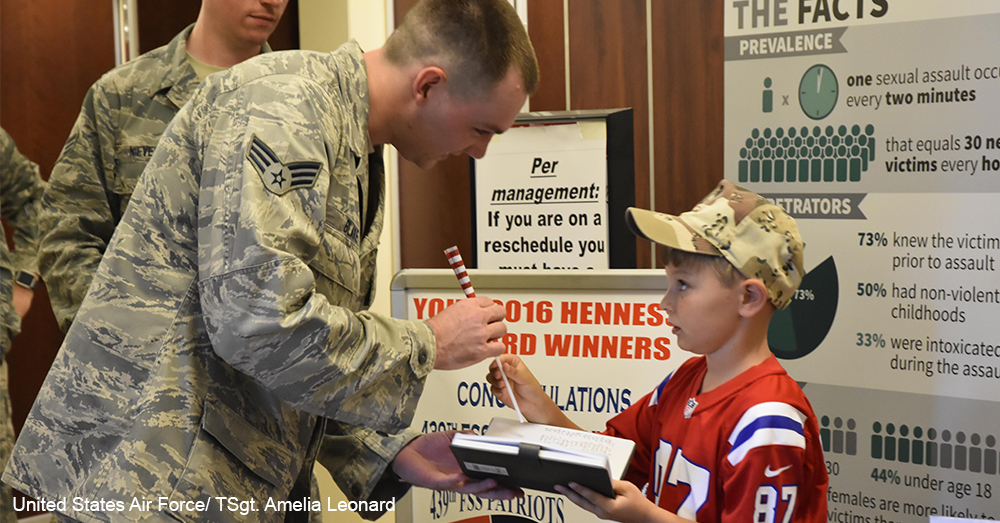 He now keeps a black book with him and after shaking a veteran’s hand, Jeffrey asks them to sign their name in the book. During a visit to replica of the Vietnam War Memorial in West Springfield, Mass., called The Wall That Heals, he and his mother met Vietnam veteran Richard Connor. The veteran was first taken aback and then pleasantly surprised by Jeffrey and his mission. He started introducing the young boy to other veterans at the memorial and has been a supporter of Jeffrey’s ever since.

In August, Jeffrey got the chance to visit Westover Air Reserve Base and meet the personnel there. He brought a sign reading “Thank You For Your Service” and around 200 small American flags to pass out. News quickly spread around the base of Jeffrey’s visit and his mission, and the Airmen came in the hundreds to personally meet him and shake his hand.

“I love the military because all the people who are in it are keeping us safe every day and making sure we have a better life,” Jeffrey said.

“It was beyond honorable and heartwarming,” said SSgt. Stephan Dacosta, member of the 439th Civil Engineering Squadron. “The CES is a tight-knit unit, and all the ‘dirt boys’ talked it over as a team and wanted to give him our shop coin to help him remember the day and encourage him to pursue his long-term goal of joining the military.”

“I love the military because all the people who are in it are keeping us safe every day and making sure we have a better life,” Jeffrey said.

As Veteran’s Day draws nearer, we wish Jeffrey the very best in his mission to thank veterans for their service. We also want to thank both those brave men and women who served and are serving, as well as people like Jeffrey for being an inspiration to others.

Remember to follow Jeffrey’s example and thank a veteran: today, on Veteran’s Day, and every day of the year!