The night before Veterans Day, the United States Flag on the main flagpole at Hampshire University was torn down and burned by persons unknown. Since then it has been flown at half mast, and later the flag was removed entirely from the liberal arts college in Amherst, Massachusetts. Veterans spoke out against the college’s decisions, and after weeks of protest their voices are being heard loud and clear.

The treatment of the flag at Hampshire College over the three-week period produced a steady outcry from the public and veterans organizations in particular. When the college’s board of trustees voted to fly the flag to half mast, veterans and military families took offense to the national sign of mourning – not to be used for political statements or other purposes. Then, just days after the presidential election, Hampshire president Jonathan Lash had the flag removed from the college altogether.

That started weeks of calls, letters, and emails criticizing the college from veterans and veterans organizations who see the flag as a symbol of freedom and sacrifice. On November 27, hundreds of veterans and supporters showed up with American flags to hold a protest. Veteran David Soucy, who served in Iraq, said at the protest, “I got hurt, spent time at Walter Reed. I came home, and there’s no way I’ll let anyone take down the flag, no way.” He added, “It means a lot to me and my brothers.” 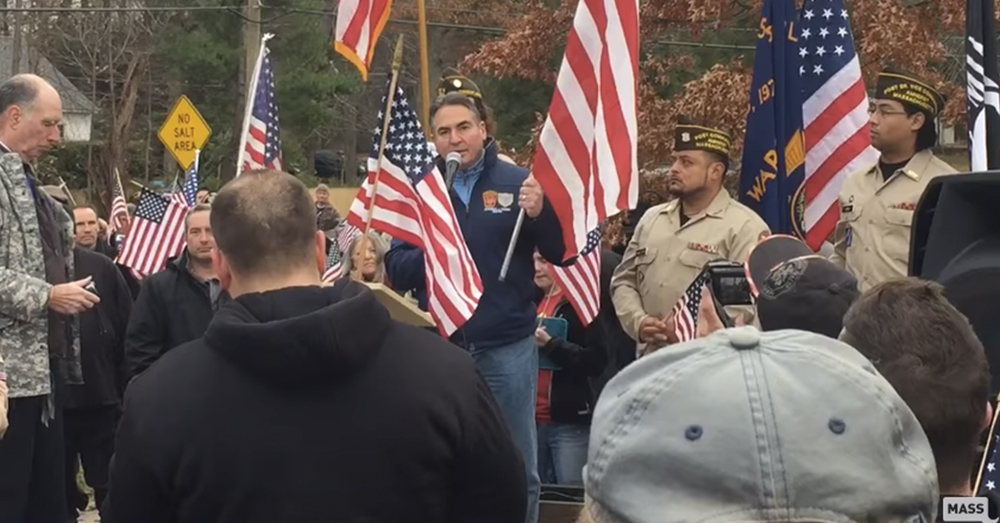 Another veteran, Jerry Maguire, gave his opinion. “They took down my flag, they have a right to that. I’m here to defend their right to do that, but I want them to understand how bad that hurts me.”

Even the mayor of neighboring city Springfield weighed in on the issue, saying, “I would just hope that Hampshire College and its leadership would rethink this and show the proper respect for the opportunities that you have here — not somewhere else, but here in the United States.”

After three weeks protest, Hampshire College reversed its decision and the Stars and Stripes was returned to its rightful place flying at the top of the main campus flagpole on Friday, where the college intends for it to stay. When the flag was raised on the flagpole early in the morning on Friday, Lash said it was “a symbol of our hopes for justice, fairness, and freedom.”

Watch video below of the protest held by veterans and supporters of the flag at Hampshire College.