Memorial Day has come and gone. The solemn ceremonies that filled the air with the pomp and circumstance of military honors, flag raisings, 21 gun salutes, taps and speeches has faded back into the everyday schedules of work and school. But there are families that live Memorial Day everyday of their lives. They are our Gold Star families, those who have lost a husband or wife, a father or mother, a son or a daughter, a brother or a sister as a result of combat and still know the pain of that loss intimately.

This is the story of just one of those families.

I saw this story the northwestcatholic.org site and was moved by the faith and the response to tragedy that it revealed. 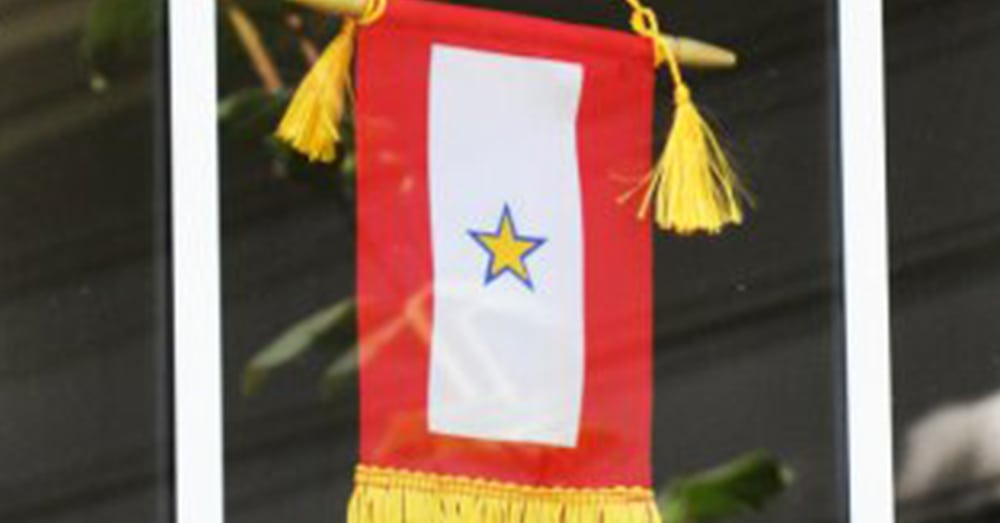 Source: U.S. Army
A gold star hangs in a window.

Krista Anderson met Mike Simpson while he was stationed with the “Old Guard,” The 3rd United States Infantry Regiment, in Washington, D.C.. Like so many young couples in this situation, they had a long distance dating relationship for sometime while he was stationed in Germany. Mike would eventually be deployed to Iraq and while home on leave from there, he proposed to Krista. They were married on December 20, 2008. Within a year they had their first son, Michael, and then were stationed at Fort Bragg, North Carolina, where Mike went through Special Forces training to become a Green Beret.

Mike had wanted to be a Green Beret all along. You see, his father had been a Green Beret, as had his brother. It was a matter of great pride for him. In fact he loved being a Green Beret so much that his fellow Green Berets nicknamed him, “The unquiet professional.”

After Mike earned his Green Beret the family was stationed at Joint Base Lewis McChord (JBLM) south of Tacoma, Washington. It was there that their second son, Gabriel, was born. In 2013, Mike was deployed to Afghanistan. Military families know that this is always a possibility, especially in today’s environment. 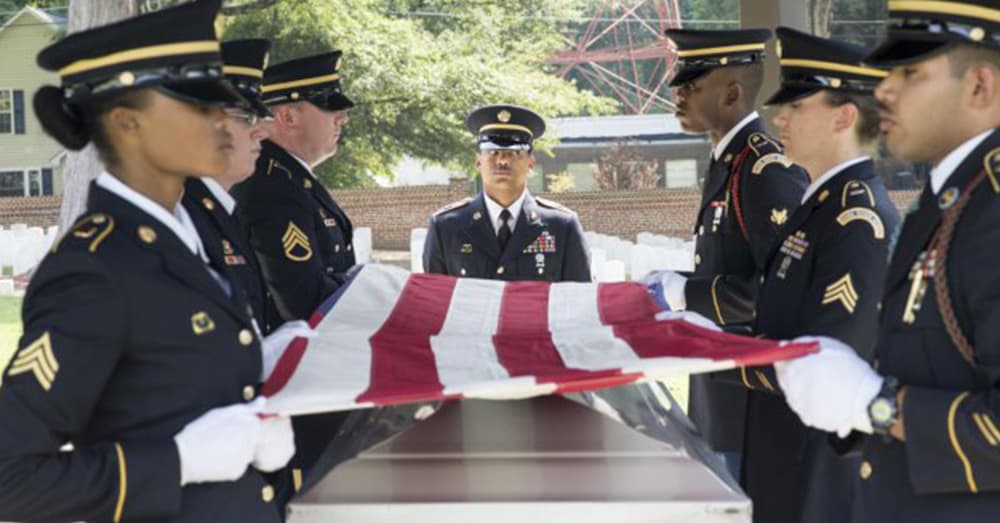 Source: U.S. Army
A flag is draped over a soldier’s coffin.

Those that have chosen to serve, and their families accept the fact that potential deployments to a war zone are part of the reality of their service lives. This is why we must never forget that the families of deployed soldiers, sailors, airmen, Coast Guardsmen and Marines are serving too.

It was shortly into his deployment to Afghanistan that the vehicle he was in was hit by an IED. Mike was mortally injured, but was able to say, “Wife, kids, love,” before he went into cardiac arrest due to the severity of his wounds. He was revived and was medevaced to Germany where he was kept on life support until Krista could get to his bedside and say her goodbyes.

It is important to bring up a troubling fact of American life at this time here too. The fact is that less than 1 percent of American families serve in our all-volunteer military today. These families bear the full burden of service with its deployments and their potential sacrifices while most of the nation goes about its daily business without ever a thought about what our servicemen and women, and their families, are sacrificing for all of them on a daily basis. 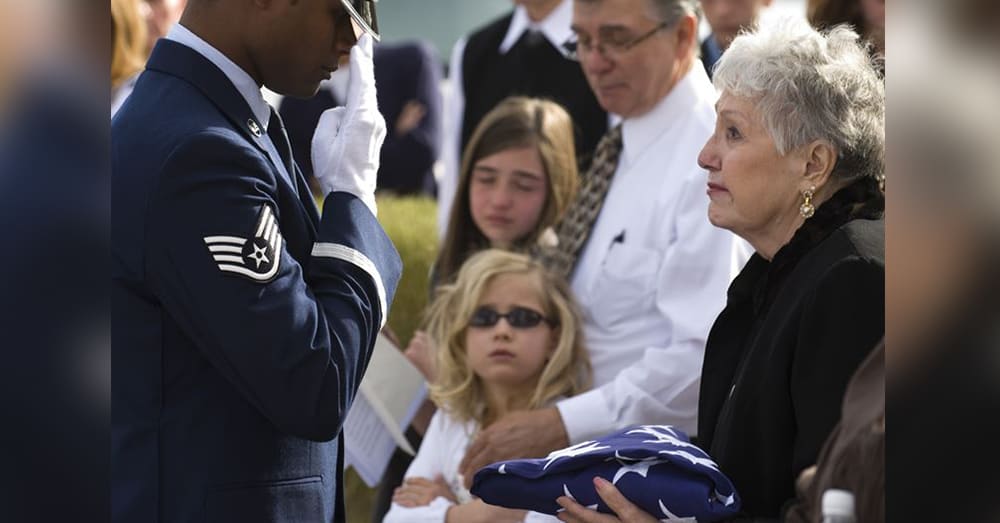 Source: U.S. Air Force
A flag is presented to the family of a fasllen Air Force member.

When Mike’s body was returned to JBLM there were lots of family and friends there to support Krista and her two boys, Michael and Gabriel. But it was Krista’s faith and courage that came to the forefront that day. When the flag draped casket of her beloved husband had been received, she turned to her family and friends and read the following prayer:

“May today there be peace within.
May you trust God that you are exactly
Where you are meant to be.
May you not forget the infinite
Possibilities that are born of faith.
May you use the gifts that you have received,
and pass on the love that has been given to you.
May you be confident knowing you are a child of God.
Let this presence settle into you bones,
and allow your soul the freedom to sing, dance, praise and love.
It is there for each and every one of us.”

She wanted to let everybody there know, “that it was OK, that we were here for a reason, that this wasn’t going to be the end. That this was going to be really hard but we would get through it.”

Every Gold Star family deals with its loss in its own unique ways. Krista Simpson Anderson faced this terrible loss and the emptiness that had entered into her life with the loss of her Green Beret soldier and beloved husband and the father to her sons, with the strength of her faith.

Yes, she knows it is going to be hard, living without him now, mourning his death, and raising their two beautiful sons alone. But she also knows that she is not alone. She has the love of her family and friends to support her and she has her faith in a God who is present to that suffering, who knows that suffering intimately and who will support her through grace and through those around her. 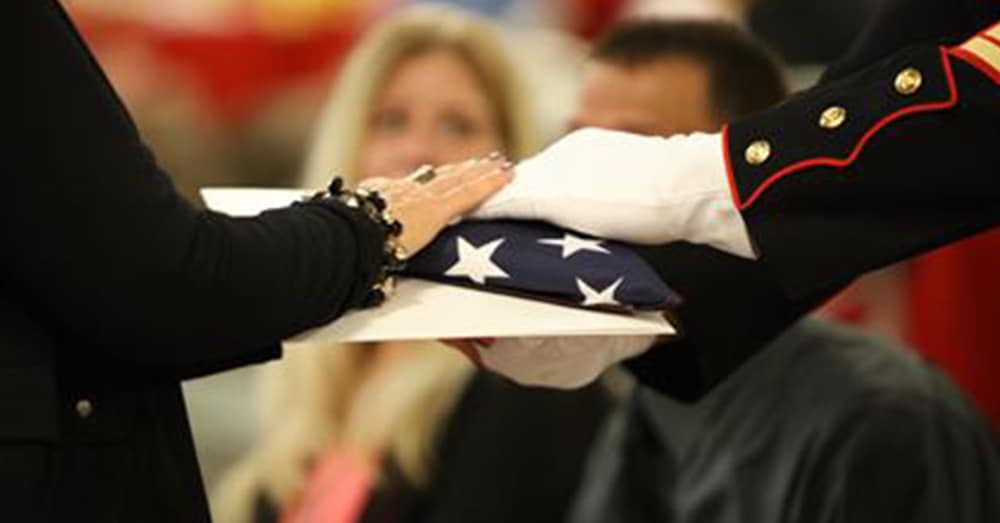 Source: U.S. Marines
A flag is presented to a Gold Star mother.

Krista had another response to this loss, a positive, caring and unselfish response. She and a close friend founded “The Unquiet Professional Organization.” This organization serves veterans and especially Gold Star families with enrichment and support activities. She says that it is a way, “to try to find some light in the darkness.”

According to the Northwest Catholic article, because of her work with “The Unquiet Professional” organization, she was recently named Army Spouse of the year. She is also in consideration for the Military Spouse of the Year, a national recognition sponsored by Military Spouse Magazine and Armed Forces Insurance.

The Veterans Site sends its deepest condolences and our highest respect to Krista Simpson Anderson and her two boys. We honor the sacrifice of her beloved husband Mike, and promise to never forget. We hope, too, that this article will raise some awareness on behalf of our Gold Star families around the country. We know that they too served and that their sacrifice was greater than most can imagine. You are not forgotten. You will remain in our prayers and our thoughts always.

The Veterans Site also encourages its readers to become involved with Gold Star families, even if it is just to listen to their stories. Let them know that you care.